Hello, I was wondering if it’s possible to remove movement speed slow while channeling Eye of Reckoning?
Doesn’t seem like there’s value that adjust it inside eyeofreckoning1.dbr file. Is it somewhere else, or perhaps it’s hardcoded somehow?

Also I’ve tried to just add some movement speed buff to eye of reckoning to offset the slow, and while it works, it’s a bit buggy with it, and the buff doesn’t always work, that’s why I’m looking for a way to remove the innate slow.

I’d greatly appreciate any help, as I’ve been stuck on this for a while already.

Did you try this? 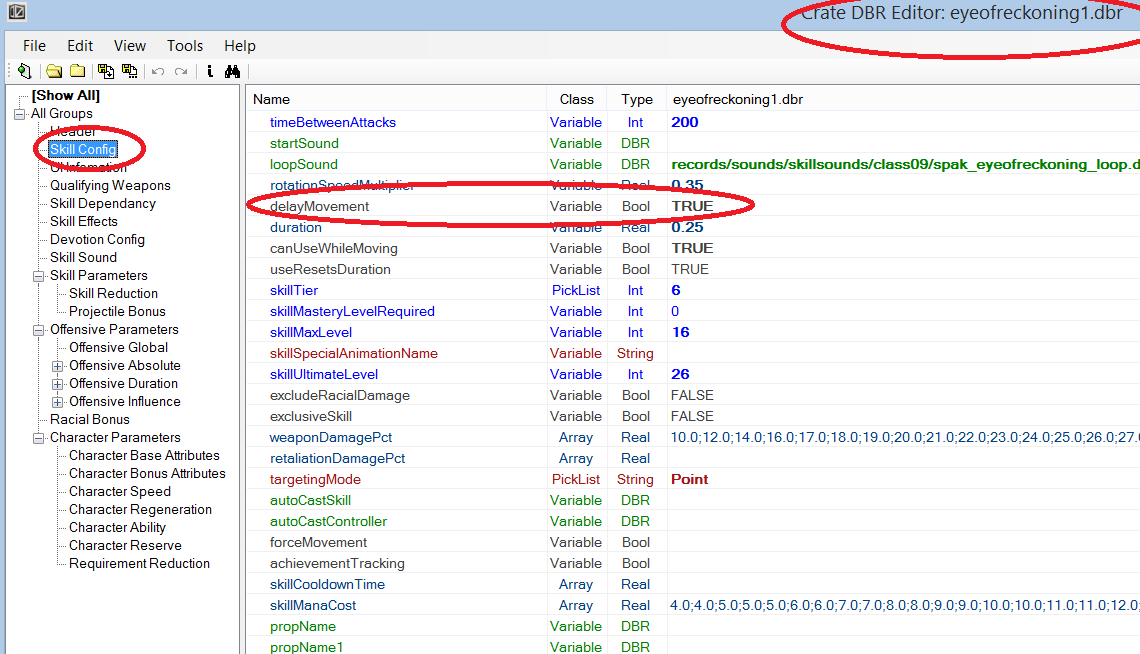 Thanks for the response. Yeah, forgot to mention, I’ve already tried it, but unfortunately all it does is remove the small delay before you start moving, it does not affect your movement speed.

Did you try these? There’s an EoR mod on Nexus that makes a change: characterRunSpeed,1.8,
There are at least 3 worth testing here 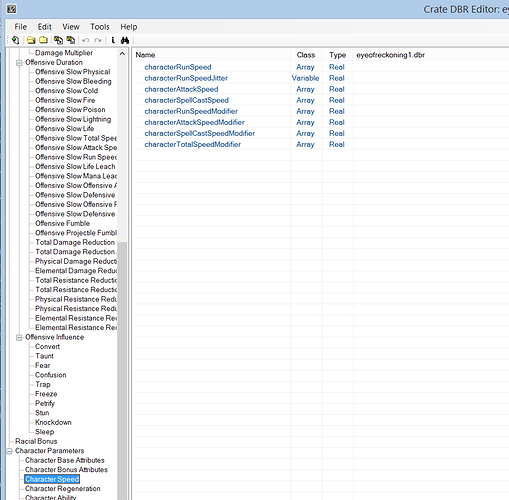 Thanks, I really appreciate the help! I’ve tried those that seemed promising:

characterRunSpeed - Similar as previous, but instead for example characterRunSpeed,1.2, causes your mvspeed while channeling to be 2.2x your regular mvspeed. 1.2 showed in tooltip as 1% mvspeed bonus. And same mvspeed bug as before.

characterRunSpeedJitter - From googling it seems to be supposed to be a variance on mvspeed or something, but there’s very little info on it. Tried , and ,0, on it to see if it would maaybe be the cause of the mvspeed bug, but no.

but in the first one there’s nothing
and the second one seems like being overwritten by eor and vr so not sure if it help you.

Did you try rotationSpeedMultiplier from speed config? Maybe it’s linked to MS somehow?

@Jonxx Btw you can always download some other mod, i.e. Diablo 2 or Diablo 3 mod and see how it’s done there provided they sped it up.

Seen the template files, but even going into other files they link inside I wasn’t able to find anything relevant.

Tried setting rotationSpeedMultiplier to 1, but I wasn’t able to see any difference at all.

I know path of grim dawn (when it was still working) had a sped up EoR, but it was done the buggy way, unfortunately. I’ll check some other mods as well.

And this is from Eye of Reckoning I think

Thanks, but I’ve tried all those settings already in multiple ways. In the end I’ve settled for just setting delayMovement to 0 & 30% mvspeed on characterRunSpeedModifier.

As I said earlier, it’s buggy, and sometimes doesn’t apply the mvspeed buff from EoR but it’s rare enough (about 5% of time on every start of EoR channel) to not be too annoying, especially with getting good amount of mvspeed from other sources.

I wanted to do it properly but after spending hours looking through various .dbr files it really seems like the slowdown setting must be hardcoded somehow. Well, at least I’ve learned a lot about file structure of the game.

I’m pretty new to modding and the way I’m learning some stuff is checking other mods database and stuff. You may find some good changes to EoR on Path of Grim Dawn. (EDIT: just noticed I’m pretty late though, still gona leave the comment)