Pretty much the final allocation of skill points, bar the extra point in Smite which needs to be moved and maybe take some points out of Righteous Fury to use elsewhere. Otherwise starting the run through of Ultimate now and just started FG stuff right after Burrwitch just for the hell of it. So haven’t had a chance to fully check it out vis Celestial’s and super bosses. But so far it carves though everything even lacking the final 6 skill and 4 attribute points and can run away very easily. Well except for Valdarian, which I died once to because with Fevered Rage he’s very deadly.

Gear wise I think the current set up is okay, haven’t been able to think up a better way to cover resistances that doesn’t lower retaliation. What it could do is more armour and better overcapping, but the acid retaliation armour etc doesn’t leave much leeway here. Could swap the belt though for Murmur’s Kiss to have fire retaliation all converted to acid damage, but the loss the current ones boni I think it’s worth to just keep the Myth. Thorny Girdle of Misty Glade. Especially as the Dreeg cult belt can’t roll suffixes according to GrimStash.

RR wise thanks to mods on some skills this has acid RR 85% + 28 flat total RR, so it’s pretty decent so far.

Devotions wise - I’m sort of okay with the current map, but acid retaliation doesn’t have the same support as physical does and it needs some RR support, for which Manticore works well. As for Affliction the flat acid retaliation it provides makes it mostly worth taking and the proc helps killing bosses since you can stack multiple pools beneath them. But, Messenger of War’s proc + the current ~80% conversion of fire to acid retaliation is starting to look really, really good. As does Targo the Builder’s Shield Wall, but no way to get it without dropping Manticore.

The alternative devotion map I came with is here: https://www.grimtools.com/calc/62aMOLg2

Only gives 100% extra retaliation due to dropping some nodes to get shield wall, but it gives max ~310,000 acid retaliation after conversions from fire and 20% physical to acid and also push armour up to 4300. Could be worth getting though since total acid RR provided is a massive 115% instead of 85% + 28 total RR from the current devotions map.

However I can’t get both Targo and Messenger without dropping either Murmur or Manticore, which while it push retaliation up to 330,000 base for acid (about 335,000 with conversion) I think, the loss of RR makes it non viable against heavily acid resistant enemies /sigh

Anyhow, any advice or criticism is welcome to help refine this to the best it can be.

Now to finally have some fluffing dinner, it’s nearly 10pm ;-; But this always happens when I fall into autistic hyperfocus mode on something lawl.

why not maxing Retribution over RF if this is a retal build?

Smite also questinoable, putting the points in safeguard for more armor or concecration makes more sense to me.

I assume those greens are GDstashed

why not maxing Retribution over RF if this is a retal build?

Smite also questinoable, putting the points in safeguard for more armor or concecration makes more sense to me.

I assume those greens are GDstashed

Retribution and Smite - whoops, forgot complete about those, probably will follow your advise and move skill points into Haven and Retribution, with some in Consecration for the resistances.

Devo maps wise, the first one looks pretty good since it keeps retal the same, but the 2nd one results in significant loss of damage unless one point is put into the 1st node of Messenger. Which gives a big boost to fire retal, but overall is still less damage, especially when compared to my alternative map.

But such is the fun of trying to find a good devotion map for acid retal without high physical to acid conversion.

GDstash wise - yeap, only way to patch the resistances unfortunately. Sentinel of the Three sadly lacks good resistances and much of the acid retal gear is similarly lacking in good resistances so you can’t just use epics etc to patch them and maintain good retal damage. Not unless you take a more physical retal focused devo map of course lawl.

Anyhow - thanks for the advise, made me think some more about the devotion map and possible alternatives.

2nd one results in significant loss of damage

GDstash wise - yeap, only way to patch the resistances unfortunately.

totally possible to get resistances with legit gear. Though your damage will suffer a bit. You can not both have the cake and eat it you know.

Sure, if you don’t take into account the fine balancing act between RR, Damage and Survivability, (which I think I’ve sort of gotten right with the current affixes etc) more RR looks good, but that doesn’t work so well when you die before you get the kill regularly.

Did test some Seraphim of Blades Dreeg Sect pants though via GDstash, but it looses ~100 OA and 30 DA and taking Messenger over Affliction will probably need better retal in total since most fire retal is converted to acid.

And I’ve started on SR though to push slowly up to above 50+ for testing, but I need to clear out the stashes badly before the loot influx overwhelms me. And finally clear out my other build’s own stashes…

totally possible to get resistances with legit gear. Though your damage will suffer a bit. You can not both have the cake and eat it you know.

True - but the point when I and most others make builds is to try and max them out fully, which is why GDstash items always end up getting used. Although it would help if acid/poison gear had better spread of resists on them. I think though it would be possible to do a no-GDstash version, since Bladed Plating can be replaced to fix resists. But that’ll have to wait until I finish testing this and get my Crucible playskills back.

Which is going to take a lot of deaths ;-; Because I’m totes a bad, bad pilot.

Boosts max Acid Retal to 320K due to Messenger’s proc and conversion from fire to acid. Had to drop Affliction though sadly, but Messenger’s boni is way to good to keep Affliction sadly.

Slight juggle around of armour augments too and a skill point to get Haven to 12/12.

[edit] Forgot how much the debuffs in FG can hurt, health’s spikey, but otherwise haven’t died yet due to procs and BoD and clear times for totems is basically 30 seconds unless enemies can’t get to me. But now I really, really, really need to clear out the stash, because it’s completely awful and this build’s also completely out of personal stash space.

Killed Ravager on Elite because I was bored: 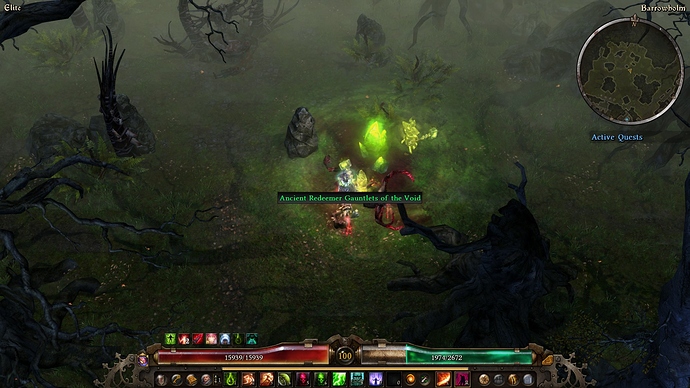 Grim Tools of current status for it.

Took maybe about a minute after the 3rd attempt, can facetank him before 50% health with nothing other than health pots, but after that you need to break off to loose his attack skill charges and let Absolution and Ascension get off cooldown. Fortunately having 2 movement skills means you can run away easily.

And yes, I used Fevered Rage on him :3 The whole time.

Tried to kill Cally, but because of insomnia the last 2 nights my piloting skills were made poop and so far I’ve died 30+ times to her. Did get very close 4-6 times, but got too cocky, as her sand summons can knock me flaaaaaat. Basic strategy - skate in, hit keys 5-0 to set up and facetank until health drops below 50% then skate out and repeat. If the stars align can facetank her for a while due to procs, but need to skate away when she does the skill with her wings that summon the sands.

I think with the Mythical Markovian’s Stratagem and Mythical Golemborn Greaves or Mythical Stonetreaders + some more blood resistance will enable to me to kill her a bit more easily. Of course though, also have to take a point out of Fevered Rage because due to not being able to stack more DA she can easily crit you to death under FV. So BP becomes more about resistance and OA reduction sadly, lowering effectiveness. Though maybe with some rejigging of prefixes etc I can make the build even more resistant to her.

But can’t test until I farm more stuff for making pots and components because I’m running low on flowers yet again for making stuff. And I should probably get the remaining bonus skill points to flesh the build out. And clear out the stashes yet again lawl.

But can’t test until I farm more stuff for making pots and components because I’m running low on flowers yet again for making stuff.

True - but the point when I and most others make builds is to try and max them out fully, which is why GDstash items always end up getting used.

Just GD stash the pots and the components

Nah - I prefer to farm for flowers etc, as every hour in game is an hour that keeps me from picking my skin, which at the current severity is a definite plus. Also gives me lots of epics to dismantle for stuff and find gear that I haven’t found yet or need more of.

I mean I GD stash faction items for me beginner builds, we all have our ways <3