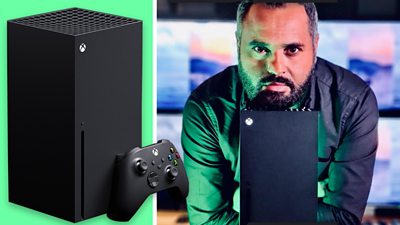 BBC Click's Marc Cieslak is among the first to play games on the next-generation Xbox.

Looking more like a small desktop computer that the shape. Plus the name is very unoriginal. So it needs to change. Games from the looks of things seem similar. And of course loading from an SSD is going to decrease load times.

Other then that, doesn’t grab my fancy.

For me, I think the PS5 looks pretty good, and also the controller is probably might be a good investment if its made compatible for PC.

While Microsoft has kept with compatibly, Sony hasn’t, And I feel that is a better choice. I also feel, that games will be better, but probably will take time for devs to get used to it.

But to me, that slab of a box of the new Xbox really doesn’t do anything for me. I understand it needs cooling, and probably because of what inside. But not that practical. I guess it makes the change of the Xbone reveal, and how bad that went down. But as that guy said, with the Xbox gamepass you going to have access to many games already. (at least if you pay the high sub price) So what is the point of that box? I feel that this is another missed opportunity from microsoft to set the bar and push the standards up.

I’ll go with Xbox Series X first. Sure it will be most likely i’ll get later on a PS5 as well, but Xbox Series X so far have the better Arguments to me. It offers me Features which i really care about, like Backwards-Compatibility…, especially as partly PC Player it’s one of the most important things to me that i’m not limited to Generations in terms of my “older” Games, but that i can keep my library with me, and there are quite some Games which i didn’t touch yet due i wait for the XSX to profit from the better Performance. Not to mention that i love the Quickresume Feature. I can say for 100% that i’m quite often in the Situation, where i switch back and forth between Games, especially when there is a good MP Game out, that friends ask for playing a few rounds and after that i go back to my SP Game. Overall i also like the Design & UI of the XSX better, plus the Gamepad, though i don’t want to fully drop the new Dual-Sense, maybe it will surprise me, but in the past i prefered Xbox Gamepads way over Playstation Gamepads.

Also not to mention another Major Feature which i don’t want to miss out which we already had with Xbox One, Play-Anywhere and Crossplay. Sea of Thieves, State of Decay 2, Minecraft, Gears and stuff are Games which are mostly played via Crossplay. And you only need one copy of the Game due Play Anywhere (Crossbuy). So my nephew and friends play often on X1 while i play on PC via Crossplay. Gamepass might be another thing, but i don’t use it very much… i prefer to own my Games not to “rent” them, but in general a cool idea.

Last but not Least, while i admit that PS5 also get some great games, so far there isn’t one where i feel the neccessity to get a PS5 right now. Horizon 2, Sackboy and Miles Morales will all be available on PS4, Demon Souls might be the only game which i’ll miss out, but i can deal with that. Xbox Series X however will get Halo Infinite, a new entry of one of my most favorite Game-Series of all Time, and while it will available on X1 as well, the fact that it will have Splitscreen i prefer to get it on XSX so i will get a smoother experience when i dig this game with Friends. (due i only own a standart X1). PS4Pro however will do their job for said Horizon, Sackboy and Miles Morales… so anyway.