Hello, people of Cairn! Zantai here to bring you the first chapter of the Grim Misadventures! As the title may suggest, the theme is modifier keys (ctrl, shift, alt). When one uses any new development tool, there are always going to be nuances you have to get used to. One major feature is the heavy use of the modifier keys. For example, holding down Alt while raising terrain will keep any assets already there at the same level they are at now, rather than also raising them. This is very useful for partially burying something or making it blend in with the ground. Ctrl may be used to erase something you did with the given tool (such as erasing a texture), or to raise and lower the height of the Plateau Tool. You know what else Ctrl is used for? Undo and redo! And you know what happens if you try to undo something with Ctrl-Z and then use the Plateau Tool because you forgot how this works?

You divide by zero. Math has taught me that this is generally a bad idea. 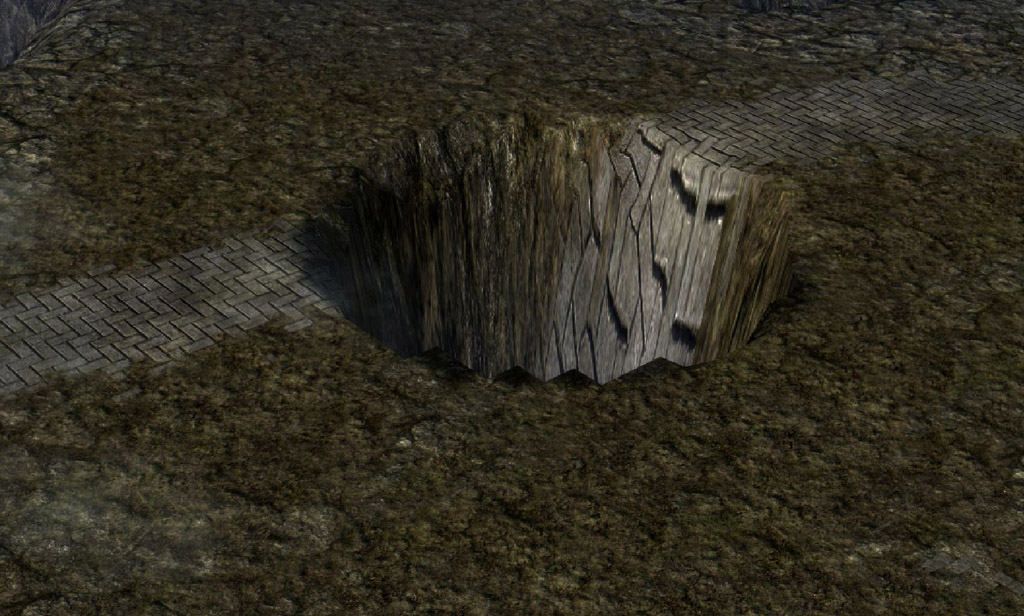 Grim Dawn’s tools come equipped with the latest in full 360˚ rotation of assets and the fantastic ability to resize them. Of course, if you don’t know that right away, you may experience some…unexpected results.

Oh, I guess that’s what the pink knob does. 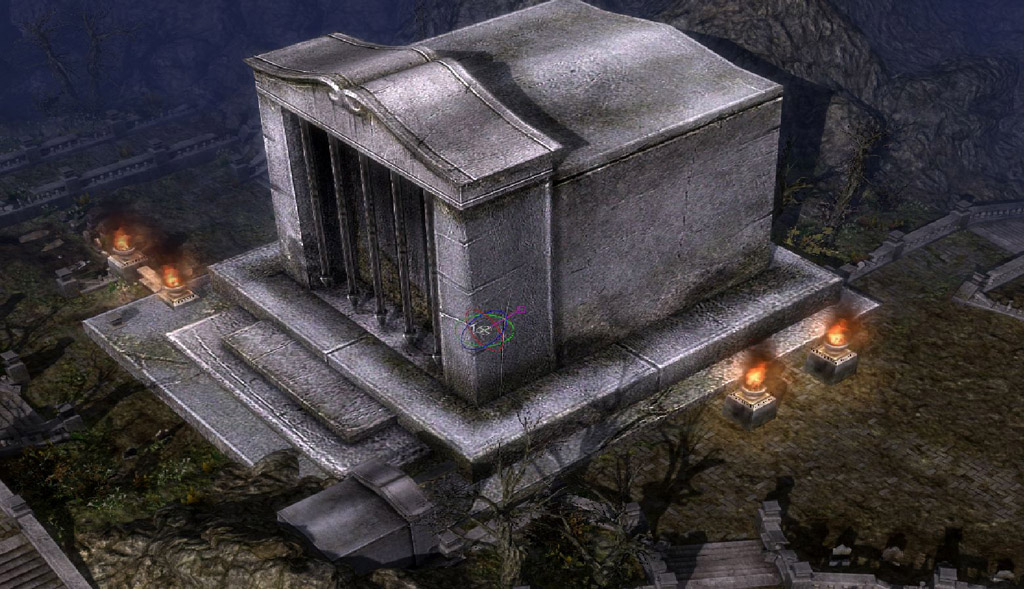 But some of you are probably not here for the blooper reel, are you? While my primary duty is to make Medierra question reality, I managed to get some real work done on the side.

Disclaimer: the following images are work in progress and may not reflect the final product. Viewing these images may cause increased happiness and excitement. Side effects may include questions, answers, and anything in-between. 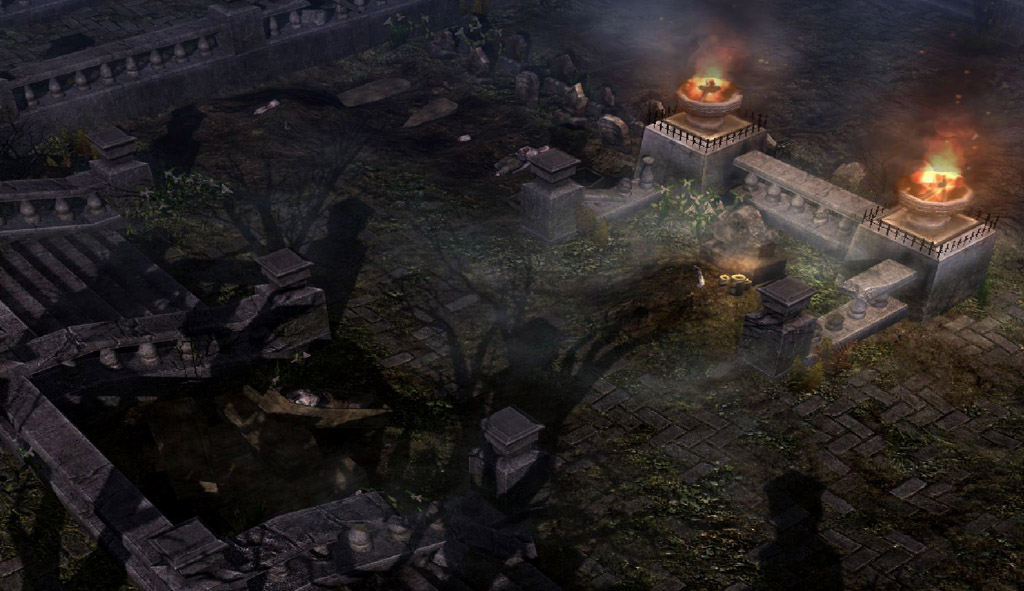 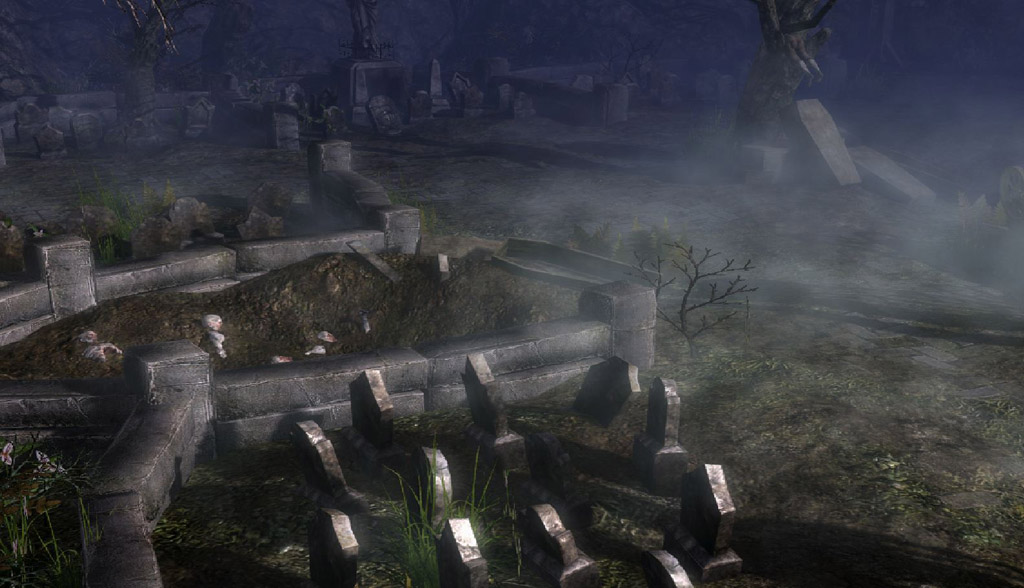 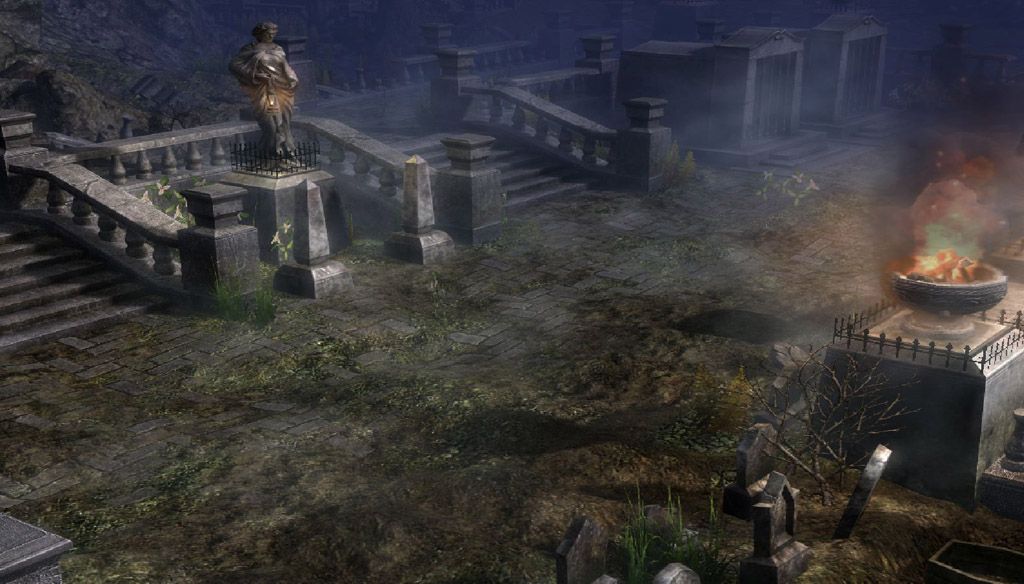 One important piece of knowledge that was unfairly kept from me was the wonderful FX directory. This is where all the really cool stuff like fires, fires, and also fires, are kept. With that, I was able to put the final touches on my level. 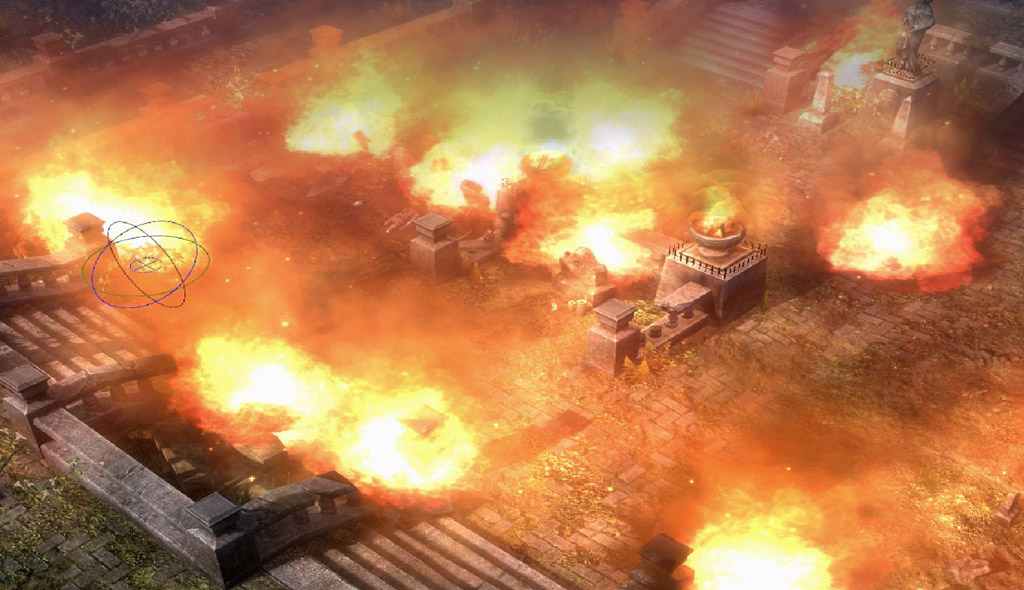 And that’s what I got for you today! Stay tuned for the next installment, coming 07/08/12!

Thanks for the update! It’s looking good. I got no questions or answers for you though.

Looking Great!.
The graveyard looks nice, and to be honest the resize mistake wasn’t that obvious to me to begin with, I thought that it was supposed to be a huge Mousolume/Crypt.
And I see that you are a fellow Pryromaniac ;).
Isn’t it just so much fun when you find the special effects when your halfway through building a map.

PS. When you look at the first image - the control mistake - do you see an image pop out, or a crater?
When I first looked at it I saw a huge blocky boulder:confused: till I looked again and realised that you had sent a cartoon asteriod plumeting into the ground instead. I like it as a interesting optical illusion.

PPS. One question that I did have is who does the statue represent in the graveyard, is it a god or just someone important?
Which brings me to a question for Med, do the gods/god in Carin’s universe impact on the game at all via factions etc, or is it just a basic there but does nothing lore?

PPPS. In the 4th pic, is it just me or is there someones lower-body stuck in the tree?

Holy cow a resizing tool inside the editor…it’s…so beautiful sob. I remember the time where you had to create a new asset and change the size inside the database editor…good times…actually painful times.

Anyway nice pics! The one with the guy hanging over the branch of a tree is kinda slapstick-sih though.

Finally, I think everyone who worked with the editor made the mistake of creating a massive hole in the ground. I also liked the opposite one. One wrong sneeze and you can touch the sky…literally.

Me likey the perfectly placed bodies slightly visible in the cemetery dirt! Keep it coming, while you are doing actual work of course!

So I am guessing you get that Sim City vibe where you build up a nice little area, then decide to cover it in fire and laugh maniacally?

Heh, I dig the hole in the ground (Ha!). When I first saw it, I thought it was some kind of trap…til I noticed the road running down into it. Looking good, though!

Mayby sometime after release there will be some sort of “making off” video, that would be awsoome, i love this kind of things.

Wow… I’m speechless the screenshots you absoluteness amazing! I love everything about it curse you though, my addiction to Grim Dawn finally stopped and its starting up again. Must… constantly… look at forums… for more… updates… AHHHHHHH!

I see the fire… where’s the brimstone?

Great screenies. I really like the statue holding the lantern.

those screenshots look amazing, looks like you are setting well in your new job and getting used to the editor, looks like your going to come up with some interesting grim levels for us to bash monsters skulls in

very impressive, can’t wait to see what else you come up with

and once you added the fire, it really changed the looks of the level, very dark and grin

I can just picture you having fun with that FX directory…

Spontaneously self-igniting grave soil… that could save a lot of money that would otherwise be spent on votive candles!

Thanks for the update Zentai. Great screens btw.

Now we’ll never know what happens when you casually move your character into a place where mass is divided by no volume to create infinite density.

Maybe the same thing that happened in Daggerfall, when you fell between two textured areas. In the non-textured dark, no none can hear you scream.

Grim Dawn is going to be so great to explore, you guys have done such a good job + it’s an open world… I already cherish the hours I’ll play the game!

Please put some great secondary stories that deepens the lore, some text when you click on a a special statue, some captivating books, npcs dialogs, etc…

I know it’s a hack n slash, but you would only increase the greatness of the game by doing that, Grim Dawn really do have a soul already (ahh the soundtrack…), it really deserves some story work to make it an all time classic!