for few days, i’ve been tinkering around with Grimarillion mod as my first step to learn modding Grim Dawn (im really interested in modding) and also as a way to familiarize myself with the tools and settings in the game.

so far, i’ve been able to do simple tweaking such as level cap increase, Devotion point shrine increase, stat per point increase, and many more.

but just few hours ago, i’ve encountered something strange, whether its from my tweaking or just a rare bug that’s happen to me.
during custom game with Grimarillion that has been tweaked by me, the first part of the game plays nicely until i reach the mission “Securing Burrwitch” where i have to go to Burrwitch to secure the portal, the problem is when i approach the Burrwitch portal, the screen shows message that aetherials are swarming the portal but nothing spawn there, i’ve looked around burrwitch and notice that its really empty, no enemy spawning.
i decided to exit to main menu and reenter the game again but still no enemy spawning around portal and burrwitch area.

possible, because there’s few things i tweaked that may or may not conflicting with the game…

so far i found 3 possible error :

i need some more testing to confirm which one is the cause, but my mind heavily leans towards my level cap increase tweak.

If you’re over level 100 that could definitely be a cause, not sure why it happens I haven’t looked into it, but I do know it happens according to a few people who have tested it

according to forum posts here, the only way to fix it is using LUA script (monster proxies uses LUA script)

If you’re over level 100 that could definitely be a cause, not sure why it happens

This happens when the field ‘maxPlayerLevel(x)’ in the associated proxy pool is not set (or isn’t there at all);
the game engine uses then a default value of ‘100’.
If you set it to ‘200’ (for example), the proxy spawns the enemies as long as your character level is not higher than this value.

allright that opens up my tweaking path to proxies.

I had a suspicion that this was the issue, good find

not yet doing tweaking on proxies but this could potentially opens up possibility of mod that offers players a no-level cap endgame mod.

This happens when the field ‘maxPlayerLevel(x)’ in the associated proxy pool is not set (or isn’t there at all);
the game engine uses then a default value of ‘100’.

what does the x refer too? (since there is min/maxPlayerLevel2 … (and higher?) )
think i understood that now

ps. uh, there are also maxPlayerLevelChampion entries … somehow i giess those may need to be adressed too?

think i found an easier solution:

what if we edit the defaultvalue setting in the template?

Are these any useful? I am wondering what these dbr actually affect. 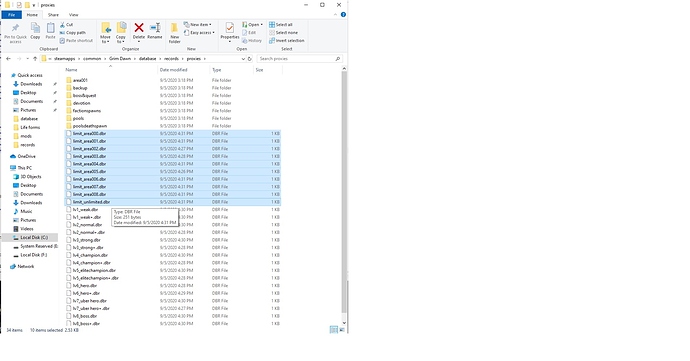 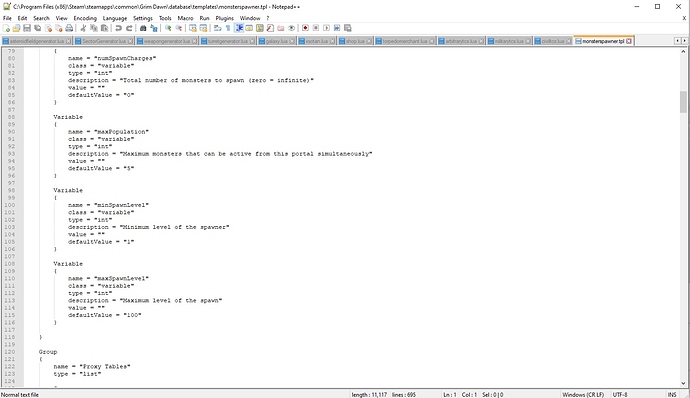