I wonder if Crate Entertainment ever played Unreal?

I was taking a walk around the Unreal wiki a while ago and found that the first game in the series features an enemy type that’s called a Slith. They look like this: 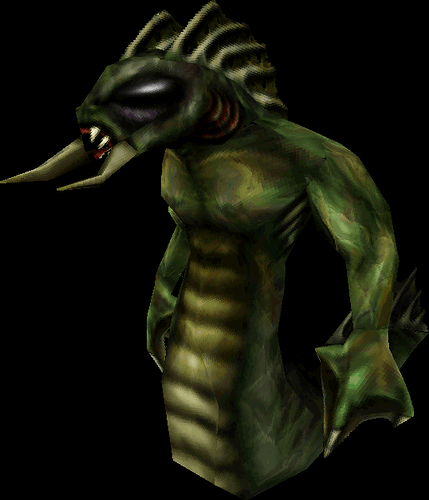 bild.png538×627 84.5 KB
They prefer watery environments and attack with claws and poison spit. Seem familiar? An amusing potential reference, is all I was thinking.
sir_spanksalot November 29, 2019, 7:21pm #2

and attack with claws and poison spit.

Unreal and GD aren’t the only games with Sliths.

The Avernum game series features Sliths as well, both as enemies and playable character. Although they walk on 2 legs in those games, they still resemble lizards, prefer wet enviroments and attack with poison.

WoW has them too afaik.

I mean, it is a type of naga which has been used in many many games and is a mythological creature/god …

In Hinduism, Buddhism and Jainism, the nāga (IAST: nāga; Devanāgarī: नाग) or Nagi (f. of nāga; IAST: nāgī; Devanāgarī: नागी) are divine, semi-divine deities, or a semi-divine race of half-human half-serpent beings that reside in the netherworld (Patala) and can occasionally take human form. They are principally depicted in three forms: wholly human with snakes on the heads and necks; common serpents, or as half-human half-snake beings. A female naga is a "nagi", "nagin", or "nagini". Naga In...

RobertHoward who created Conan the Barbarian about a hundred years ago, described lizardmen as the ancient race preceding humans and constantly plotting to control and eliminate them from the times of Atlantis (some 13-15k years ago).

The term “slith” seems to originate from Magic The Gathering. But in MTG it’s not a lizard type creature, more like a golem. So the Sliths from GD, Avernum and WoW seem to be inspired by Unreal indeed.

unreal slith is part of the skaarj empire, aren’t they? skaarj elites are kinda like the yautja predator from the alien franchise. wondering if gd2 will see an upgrade of the slith that behaves more like skaarj elites (ambushing players with ferocious melee assaults).

or maybe the slith will stay slithering slickily in their slimy habitat in gd2. who knows.

that being said, i’m disappointed that epic games has sacrificed the hardcore unreal series for the sake of the kiddie skin market fps fortnite, because of $. borderlands and warframe can be considered the spiritual successor to unreal series imo. they have the insane speed and viscerally violent combat that the unreal series has.

maybe the slith will finally learn to wield rifles in gd 2. and wear cowboy hats.