Is it me or itemization in this game sometimes feels '‘stale’ for a lack of a better word?
What I meant by that is that almost every modifier on items resorts to % to resistance, % damage + x to skill…
Unique modifiers like damage to Chthonics, Burn Retaliation over x Seconds, Energy Absorbed from Enemy Spells, chance to avoid projectile etc. are very rare.
This kind of makes me wish we had a lot more of those.
On the other hand I really love amount of skill procs from items so I guess they make up for it.
Don’t get me wrong I love everything gd has to offer but I kinda miss those…
What do you think?

?, how do those specifically mentioned modifiers change things to not feel “stale”

, - when they are basically like the other stale modifiers you mention, passive stat boosts
dmg to cthonics doesn’t “do” anything, it’s basically just a %dmg boost you can’t “see”, just passive % dmg only merely applied the times you fight those monsters, likewise with the others - except retaliation basically being worthless on a non retal build
contra that to “all” the other actual modifiers, with changes you can visibly see or notice, like when things either transmute a skill so FX gets a different colour, or changes how a skill behaves, ex passthrough, narrows the spread of scattered projectile like trozan/devastation
the “modifiers” you mention are just passive stats like all the other, except for the burn retal you aren’t likely to notice them, actual modifers you should be able to notice most of the times

guess what i’m saying is, i think you “think” those modifier appear “not stale” because they “sound” cool, but they aren’t actually that special as one might think
(well apart from racial maybe, but that’s merely because of how it applies to dmg mechanics)

This kind of makes me wish we had a lot more of those.

I think they’re fairly common, it’s just a lot of them in my experience typically appear on specific Rare affixes or unique Rare, Epic or Legendary equipment. You’re far less likely to find stats like those just wading through randomly dropped or vendor bought yellows or greens.

As an aside, I’m also glad that items in Grim Dawn actually have meaning to a majority of their stats and aren’t massive clusterfucks of bloat like this: 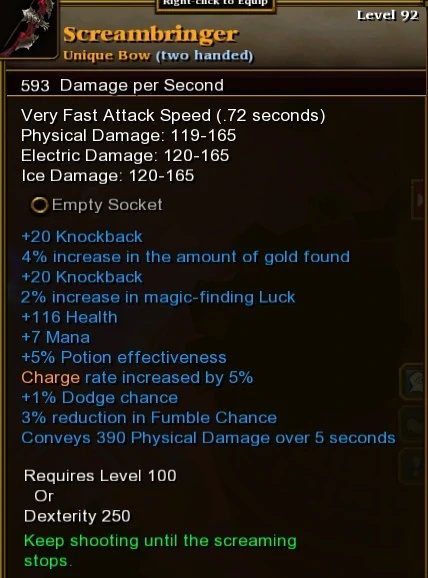 That was just example, maybe not good one but still closest I could find… Whether their effects are/aren’t as noticeable is not point of topic.

“all” the other actual modifiers, with changes you can visibly see or notice, like when things either transmute a skill so FX gets a different colour, or changes how a skill behaves, ex passthrough, narrows the spread of scattered projectile like trozan/devastation

Can you be more specific what you’re talking about? Granted effects, dmg conversion, masteries skill mods on item?
Maybe show me through grimtools?
What I’m talking about are unique mods on item that would offer something different like change a skill to homing,repair the item when you deal dmg with other weapon etc.
Just for clarification I’d like to buy a game so this is important to me.

Here are all skill modifiers
https://www.grimtools.com/db/items/skill-modifiers

If we had much more weird modifiers the game would definitely be harder to balance.

for skills on item we are lucky to have this

It doesn’t have chaos and lightning vindictive flame. I don’t know who is ever gonna play them… oh wait we are getting Ember’s Callling next patch.

Not sniped because I didn’t quote this

Didn’t think about it but it’s a good idea to have OP watch the video with all the cool-looking item skills (also OP, it’s not only about the visual because you can build around many of them)

should probably also be noted that Crate has tried (and imo done a good job) not trying to just fill items with “exotic” stats and effect, but make every item useful in “some” way or form, and also opted to not bloat them with “lesser” useful “but cool sounding” effects, (and ofc not put really powerful things like Racial on “every” item)
but, there are toooons of modifiers, and many of them super awesome, and most importantly, most are not “hard” to get while leveling (maybe requires a little effort for some more than others), but more so, they are usually all useful - probably because they didn’t want items to run into the “cool but useless” issue of ex other game’s item stat bloat

I don’t know who is ever gonna play them

I’ll be over in a corner here.

Seriously though, they’re not terribly needed either unless it’s for completionist’s sake. Chaos VF looks basically like some already existing procs like Demonbone Legplates or bizarrely like Impurity. Lightning VF looks similar to Cold.

Yes, I must admit it’s quite different approach but I like that. I’ll get used to it. Besides it helps getting every item useful in some way. Can you name some of of your favorite modifiers by chance?

It’s fine. On another topic, these items only add flat damage to Vindictive flame and they change the visual, yet Morgoneth set and Nightbringer have vitality Wind Devils support but not visual changes @Zantai reeeeee (:

You’d need Lightning to Vitality conversion on the helmet for Red (this is how it works in the game for the most part)
Lightning to Cold though… Wind Devils are translucent so making them more bluish wouldn’t do much probably.

some of of your favorite modifiers by chance?

aside from some modifiers that grant awesome skills, like ex Outcast Hood or Apocalypse, and other “flashy skills”
you have stuff like that makes a 2h exclusive skill able to be used with 1h
making certain cooldown skills have less cooldown so you can use them more often, almost "spam"able, ex Vanquisher set for skating, or Loxmere blades for Shadow Strike
obviously dmg modifiers that transmute skill dmg type to another so you can use the skill in a different build, ex Fire Forcewave and such (there are some really nice FX changing transmuters, like green Sigils etc)
Passthrough is super cool, tho rare, it allows you to “shoot through enemies” with a skill/shot, so all get hit, and this can look pretty awesome with certain skills, ex @eardianm’s famous dudu

stuff that adds “aoe”/multi target hit to skills, so when you swing your big club you hit like 5-8 targets instead of 1

would be impossible to list them all i think, there are so so many, and they don’t even all fit on 1 build but you have to do many different characters to “try them all”

but overall i think stuff that either changes the FX or effect of a skill is my favourite modifiers, because not only do they make things potentially look cool, they also add so much different utility to the items/skills so you can use the same skill with a different dmg type or get “more” out of a simple skill, ex more pet limits so you get 2 dogs, or 4 blade spirits/guardians etc etc

On the other hand I really love amount of skill procs from items so I guess they make up for it.

Check out this proc madness then with no active or mastery skill used:

someone is seeing red