The journey into the frontier was dangerous in itself. Many had died along the way. The reward for this brutal expedition was further hardship, but nevertheless your people thrived against the ravages of nature.

A prosperous new town was erected in the farthest reaches of the wilderness. Before long, others have made notice of your achievements. Wealthy merchants have arrived bearing goods and seeking to trade. Immigrants made the journey as well, seeking opportunities in the frontier.

But not all have come with good intentions. Raiders, bloodthirsty bandits and thieves, see the growing town as an opportunity to profit, and they will take what your people have harvested and produced, by force if needed. Stand guard, and ready your defenses! 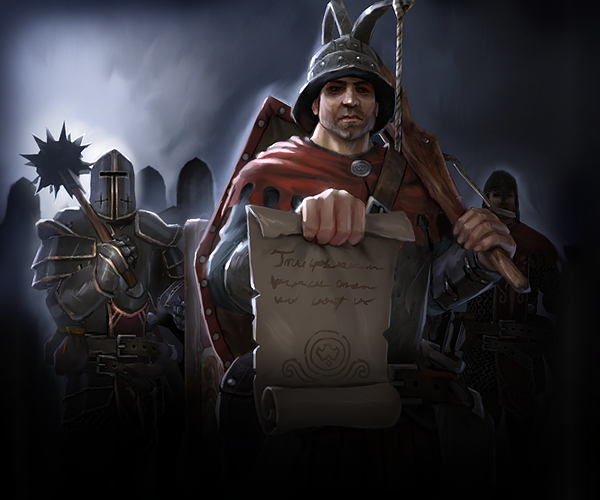 One option you will have when starting a new town is to enable Pacifist Mode. You can build your settlement in the idyllic wild, away from the cruelty and greed of mankind’s worst, a perfectly valid way to play Farthest Frontier. In Pacifist Mode, raids and animal attacks are disabled, allowing you to focus on the town building and economy instead.

But should you choose to brave Farthest Frontier at its full difficulty, raids on your town will become a regular occurrence. Thankfully, there are a number of strategies and defenses you can employ to keep your people safe.

Long before your people settled in the frontier, it was the domain of nature and that is a relationship that must be respected.

Wolves roam around their dens looking for food and will attack villagers that come too close. Unfortunate survivors of wolf bites can also contract rabies, which is almost always lethal. Grazing livestock make easy prey and will get attacked if not protected or fenced off. 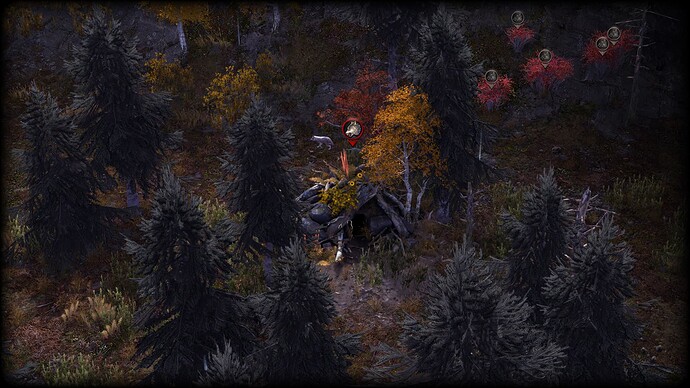 Equipping your people with Hide Coats can reduce the risk of contracting rabies. Likewise, hunters are much better equipped to handle wolves than villagers as they can take them on at range using bows.

Bears are naturally curious animals that will rummage through homes and stores looking for food. They are very dangerous if provoked and can be a threat to livestock.

Boars are territorial beasts and will attack villagers that come too close. Boars are not always aggressive and can even become spooked by approaching villagers, but a charging boar can be difficult to take down.

Hunters will not engage boars on their own unless threatened, but can be directed to attack them should you choose. They will have better chances of success if they team up with other hunters.

As your town grows, it will inevitably attract the attention of raiders. These groups of thieves and barbarians come seeking what your town has produced, and they are willing to take it by force. 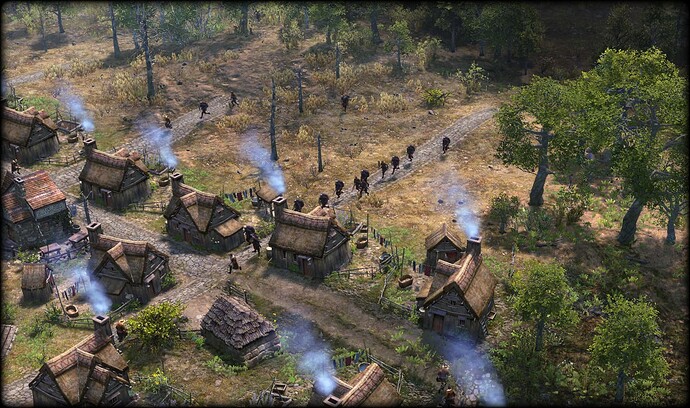 When raiders attack, villagers will flee for their lives. Any unfortunate enough to be caught in the wake of the attack will likely be slaughtered. Because of this, raids are particularly dangerous for those villagers working far from the town as they may not have sufficient time to escape.

At first, raider assaults will not be significant threats, but as the town grows larger, so too will the raids. In time, raiders will employ better weapons and armor, and may even resort to using siege weapons. Do not take this threat lightly.

Some raiding groups are more organized and will offer the town an ultimatum before attacking: give up your gold and live, or pay with blood. You will have the choice of paying the extortionate bribe, or face the mercenaries on the battlefield. A well-prepared town may fend off these well-armed invaders, but the cost in lives may be significant.

The First Line of Defense

The Town Center marks not only the foundation for your town, but it’s also a defensible position. Should raiders attack your settlement, a bell icon will appear over the Town Center. Activating it will rally villagers to seek shelter inside. Any villagers garrisoned this way automatically fire arrows at nearby threats. 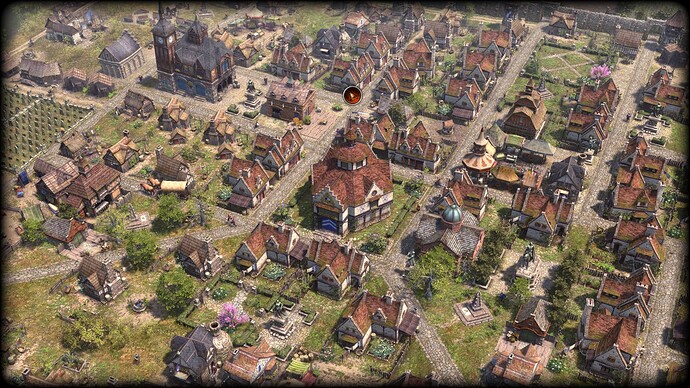 For a town just starting out, where resources may still be sparse and unavailable for more formidable defenses, the Town Center can save many lives and prevent early raids from making off with your precious goods.

A prospering town under constant threat from raiders may eventually want to invest in walls. While they cannot stop raiders indefinitely, walls can often hold them off long enough for help to arrive, or for Lookout Towers to do their job. 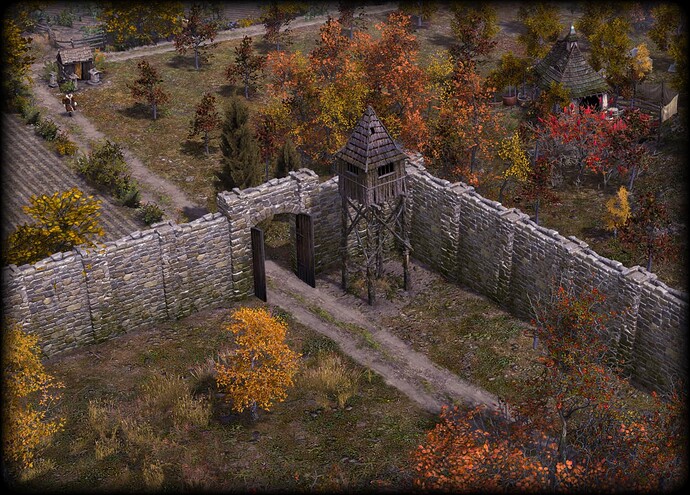 Lookout Towers are a good solution to defending a fixed area from threats. The guards stationed inside will automatically fire arrows at nearby foes. They may not be enough to take down overwhelming odds though and clever raiders may seek out weak points in your defenses that are not protected by towers at all.

Both walls and towers can be upgraded to formidable stone fortifications that can withstand all but the mightiest foes, a worthy investment as the assaults on your town become more intense over time.

In time, raiders will likely overwhelm your walls and towers with sheer numbers and formidable siege weapons. With your defenses breached, one last hope remains: a Barracks. 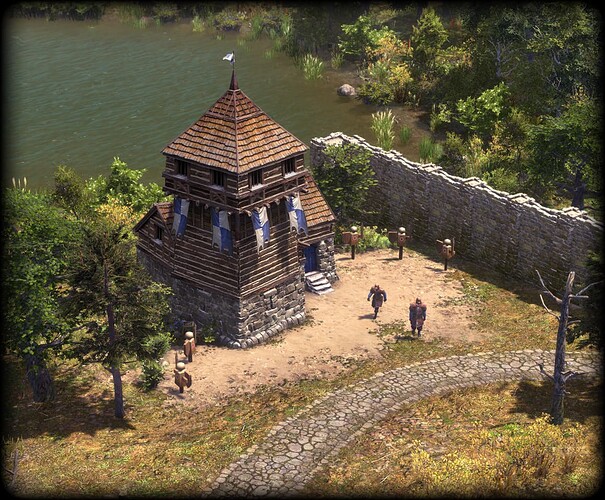 From the Barracks, you can assign villagers to be employed as soldiers. This has an upfront cost and an upkeep, so a steady income of gold will be necessary to maintain your standing army. Just as with Lookout Towers, Soldiers garrisoned inside a Barracks will fire arrows at nearby threats, but their true strength lies in the ability to rally them into battle.

Soldiers rallied to an area will automatically engage with any threats along the way and defend it with their lives. 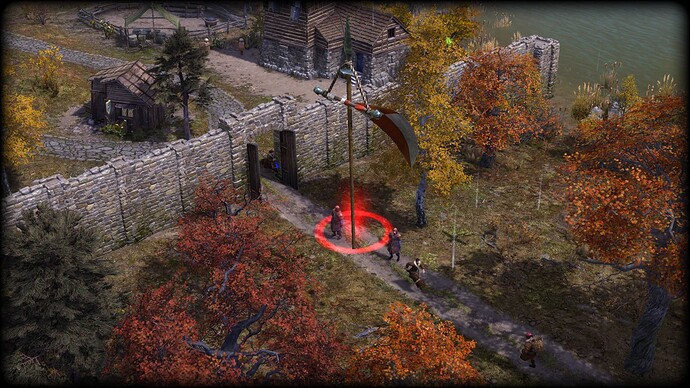 Well-armed Soldiers are much better prepared to handle raiders head on than poor villagers. A standing army can spell the difference between a decisive victory and wanton slaughter.

Soldiers are only as effective as their tools. Troops wearing only hide jackets and armed with a bow will fare poorly against armored raiders brandishing heavy maces.

Supplying your troops with better equipment will be critical to their survival as conflict escalates with the invading raiders. Where once a simple club sufficed, nothing short of heavy weapons and crossbows will fend off multiple heavily armored brutes.

Soldiers equipped with the toughest armor have the best chances of surviving a conflict and evading dangerous festering wounds that can lead to a slow and painful demise in a hospital bed.

While unarmed villagers will flee to safety, those equipped with sword or bow will rise to defend their homes on their own. There may come a time though when you need to coordinate the defense efforts directly.

This is made possible by drag-selecting villagers and issuing commands. Anyone that’s played an RTS will be very familiar with this mechanic.

Even unarmed villagers can be commanded to attack in this way, though the situation must be dire to justify the cost in lives such an order will likely generate.

Combat is an optional mechanic in Farthest Frontier, but enabling it adds yet another fun layer of depth and progression to the game. Watching a massive raid disintegrate upon your defenses is immensely satisfying! Soon, you will have an opportunity to make your own battle stories in Early Access!

Eager to learn more about Farthest Frontier? Check back on 06/06/2022 for the next Journey Log!

I’m looking forward to this aspect of the game, too!

I’m just hoping it’s either customizable enough or capped in escalation. For example, while I love RimWorld dearly, its raids just become obnoxiously (read as: unfun) large. And the developer is in a perpetual arms raise with “optimal players” that leave the majority of players caught in the cross-fire of defensive nerfs and raider buffs. A lot of us want raids. But don’t want huge deadly raids.

Ideally the player can indicate the cap andor ramp (but especially the cap) of the raids. At a point, you should be able to feel secure.

Please allow us to summon Mogdrogen and fight him.

This is going to be sick.

Soon, you will have an opportunity to make your own battle stories in Early Access!

In Pacifist Mode, raids and animal attacks are disabled, allowing you to focus on the town building and economy instead.

I think the Pacifist mode should be limited to bandit raids only. Wild animal attacks are part of nature and could also be new player tutorials in combat. Alternatively, make it 2 options Raiders and Animal Attack.

I wonder if wolves, boars, and bears will give meat or pelts when killed.

I think the Pacifist mode should be limited to bandit raids only.

You just contradicted and defeated the purpose of the term, and feature, known as ‘Pacifist mode’ in one short sentence.

random cronley’s gang generic female bandit:
me and the boys, getting them villagers. get em, boys!!!

i wonder if some bandits can be bribed or coerced into betraying their allies in the field, then joining the town as extra manpower. and i also worry that in some cases several villagers could be working for the bandits, attacking the town from the inside when the bandits invade.

all the warnings about deadly festering wounds from battles with bandits and nature also makes me wonder if the medicinal knowledge in that era are still mediocre.

I can already see this is going to be my favorite town builder since Pharaoh/Cleopatra, which I frikkin’ loved. Looking forward to FF!!

Really looking forward to early access for this game!

This game looks great! Still getting AoE 2 vibes, which is totally cool!