The Gods Are Watching You 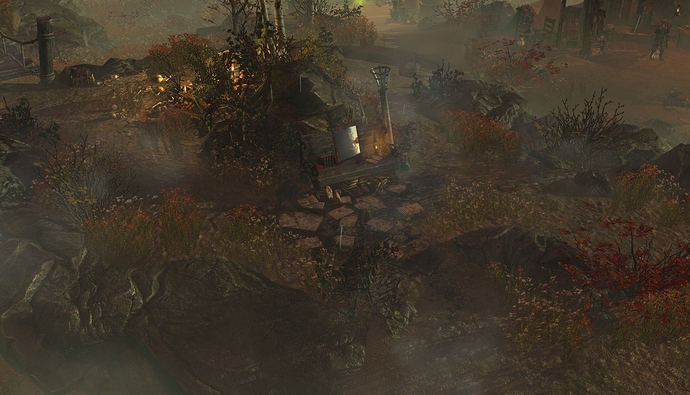 There are now two different versions of Nydiamar:

CLASSIC Version — Offers a play-through similar to the actual Grim Dawn Campaign (where you play through three difficulties), with identical balancing. For people who want a slower and more balanced progression.
ULTIMATE Version — Offers a play-through on only Ultimate, with all new mechanics introduced in this update. For people who want a fast but challenging progression, and who do not want to do multiple play-throughs to see everything.

New Play-Through
In this play-through of Nydiamar, you can only play on Ultimate. You are now able to play through the whole mod from Level 1 to 100 on only this difficulty. When you reach Level 100 and reached the end once you receive a key that unlocks Nydiamar Dungeons, which could be considered the actual endgame challenge of Nydiamar. It is your choice to continue playing there instead of the normal campaign.

Due to only being able to play through one difficulty, some Devotion Dungeons now grant more Devotion Points than before:

In addition to this, the Level 10 Reward now awards 15 Devotion Points instead of 5. You now need to restore all shrines to reach the cap, but only once.

You can not use existing characters, but you can use their shared stash — you are supposed to have a rough start, so you feel the need to use a corrupting buff to survive. Use the token LET_ME_PLAY_DAMMIT to have your way.

Nydiamar Dungeons is already included in the download (both, CLASSIC Version and ULTIMATE Version) and has its own mod page, which you can check out if you want to learn more about it — although this version is still slightly different.

New Mechanic — Favor of the Gods
The gods are always watching you. Every now and then, they will act upon you. It does not matter where you are, or what you do, they won’t hold back.

An act upon you either increases or reduces Favor, depending on what has happened to you.

Gain their Favor by doing good deeds, such as:

Lose their Favor through Corruption and dying.

New Mechanic — Blessings & Corruption
The world is gruesome, and one being declared the savior won’t save the world without a helping hand. A Squirrel is offering you its service, which are five different Blessings, granting you each powerful bonuses. But power comes with a cost, as such they corrupt their recipient over time.

You can keep track of both, Favor and Corruption, through the Faction Screen or a dialog option.

These two new mechanics also exist in Nydiamar Dungeons. The key differences are that you can now only gain Favor through completing dungeons, Corruption is now something you gain passively, and you can only have two Blessings active at a time.

Changes marked with (+) were applied to all versions. (–) only to Nydiamar. Overall, lots of changes, so a few mistakes might have slipped through, especially since I can’t test that many versions properly — please report anything unusual.

Constantly reusing Nydiamar to create new versions … What is this, Skyrim?

Thank you for the update, will be starting a new Character on Ultimate, just a few questions though, would the D3 classes be more balanced for this? Iam curious about the drops as well, do D3 class specific armors drop, like +skills on random rare gears or only for normal classes? Thanks!

The classes are really polished and lots of fun, so you should give them a try. Balance is up to you, just take less or more Blessings to tune it to your liking.

Yes about the drops.

Good day, can we post requests to features here as well. I would like to know if it is possible to add the caravaner mod to Nydiamar as well, like what you did on your other mod please. Thanks.

This was quite easy to do, fortunately. Although I did not test every version.

That was quick, thank you! Will check this out.

Was able to test it and it works, thank you again.

Thank you again for this mod. Enjoying it so far. I do have a question though, is there a way to cancel a bounty? Or is it like standard GD where you cannot? I have picked up the kill undead by accident and it is taking a long time to complete. Is there any place near the beginning that have lots of undead? Thanks.

Right after the Lorshade Mine (or even “inside”), which is near the beginning, you will encounter plenty of undead to complete the bounty quickly. So just keep going.

Thank you, will go there. Thanks.

Just started up the mod and everything is running fine. I noticed the stash swap button was misaligned, and the UI doesn’t match in the stash and character screen. Furthermore, some of the tutorial tool tips show up really high and are cut off by the screen edge. Is this a known issue or something I can adjust in settings? Or did I mess up installation at some point?

Also, I cannot get my character to show correctly in GD Stash. Is this a mod that I have to tick the total conversion option before importing the database? Do I need to import both mod folders or just one? Any help is appreciated!

Regardless, I am enjoying the mod and having a blast. Great work!

EDIT: Are you playing with the Diablo 3 classes?

Can you maybe post a screenshot for me? You can drag and drop it into a reply, so no need to host it anywhere else.

You can disable them through the options menu, they won’t tell you any Nydiamar specific tips.

Nydiamar and NydiamarDungeons have almost the same structure, so it really should not matter which database you use! 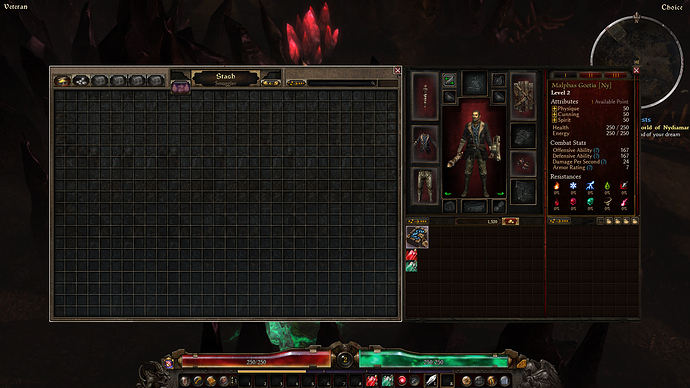 Sorry, I left out some details there! I am playing the classic version with the D3 classes downloaded from Nexus.

I’ll also try to grab a screen shot of the tooltips that were cut off by the screen edge.

Everything with GD Stash seems to be working as intended with the steps taken in my prior post. I was confused why one database was more cooperative than the other, but I shouldn’t look the gift horse in the mouth… 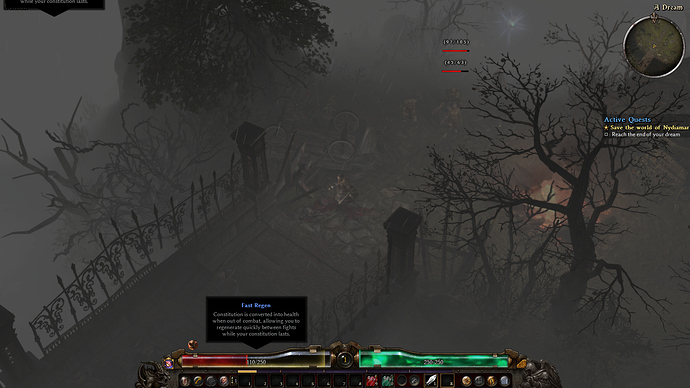 I started a new character real quick. It seems only the tooltip concerning Fast Regen and Constitution was cutoff in the top left of the screen. More accurately, it seems the tooltip is duplicated, and the duplicate is cutoff at the top of the screen. So far, no other tooltips have this behavior.

I might release a patch today or tomorrow which might fix the UI, so check back eventually!

EDIT: I’m still waiting for some permission, so hopefully I get the patch out by the end of this week.

Must have been a year since the mod has crashed the last time for me playing normally (and I alt tab a lot). The only crash I currently know of is when someone tries to relog through the main menu.

When do the crashes occur? During loading screens? Do other mods work fine (in case you play them)?