=== News ===
New version is up. it contains a fix that allows the players to have some close-in zoom control as the previous version was not working for some people. It should work now. Let me know if anything is up.

I decided to give a hand into modding and I always wanted to have a more immersive experience with Grim Dawn. After fiddling a bit with the camera settings of the game, voila, I made a small and simple mod called Third Person Camera.

What does it do?

Well, it allows you to play with a very close in zoom for a more immersive experience. Grim dawn has a lot of interesting details that escape the eyes with the far away camera, but with the close in one, you can experience those details. Also works great to play with controller!!! 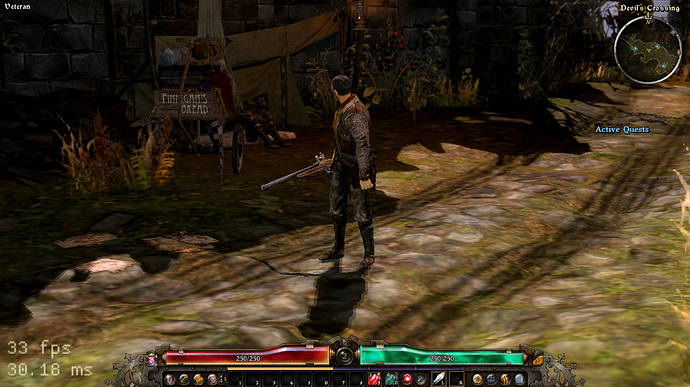 -But meiamans! I don’t want to play with controller.

Oh ho, no problem, it can be played with keyboard and mouse as well without any problems, I also recomend the GDAutocaster for a more smooth keyboard and mouse experience. It is not required to play but it makes the camera auto rotate following your mouse clicks. It is all thanks to this person:

The video below shows the combinated usage of the GDAutocaster and this MOD:

You can get the GDAutocaster by clicking here

It’s a little late here so can’t test at the moment but I will agree.The grim dawn world looks dope.I personally would love this with a mod like dawn of masteries or grimmillion but most prob won’t see much in closeup with super spawn.

I personally play this mod merged with grimarillion, it is a lot of fun, however I cannot publish it without consent from grimarillion’s owner.

I can ask him if he is willing to give it.
In regards to super span, it is doable because the close in camera slightly changes the approach the player plays the game with so the player has a tendency to always try to position him/herself in a way he/she avoid being surrounded and he/she can still see the character.
Played with friends and noticed this.

Also, great to play with a controller.

I personally play this mod merged with grimarillion, it is a lot of fun, however I cannot publish it without consent from grimarillion’s owner.

I can ask him if he is willing to give it.

You can just DM him and ask I suppose. I don’t think it would bother him that much as long as you take responsibility for any issues arising out of your merge/changes. Grimarillion is a combination of other people’s mods too.

That is no problem at all. I will just ask then.

It’s great!
There’s was Grim Cam but it overwrites (deletes) in-game keyboard rotation.
Now some players can finally have automatic camera rotation with TPP camera that needs this rotation.
Only works with Mouse and Keyboard

[edit] Here’s how it works with some quick config:

[edit2] I forgot to include the cursor in the video so it’s
not visible how I work with it sometimes (move a bit
further from the character) to force the rotation.

Yeah, I tried Grim Cam and hit that exactly problem with it. That is the main reason I made this mod.

On a side note: I also managed to reproduce a first person perspective. I saw it on an 2017 youtube video and decided to try to reproduce and it works. There are a few issues, such as the clipping of the sword and shield you are holding and the fact Grim Dawn sky is a pitch black when looked at certain angles… kinda breaks the immersion. I think there might be a way around this but I didn’t figure out yet.

I could share the first person perspective mod if there is interest.

I kinda forget about playing the controller and it’s definitely better to use it with your TPP mod instead M&K.
So it’s only for those that really want to stay with mouse and keyboard and don’t want to press any additional buttons.

Feel free to publish this.

It’s not a mod, just AutoHotkey program independent of your mod

Basically you define regions on the screen (can be edges of the screen
or everything except circle around character etc) where it should rotate
on it’s own and there’s a check whether to rotate left or right.

I could share the first person perspective mod if there is interest.

I think there might be a way around this but I didn’t figure out yet.

I doubt there is any way to do anything about the sky. GD is topdown isometric so it doesn’t really have need of a skybox - hence the blackness. Then again, I don’t really know the mod tools well… so maybe something can be done with it?

And I shall like this too, good meme material!

I actually play with a controller.Only games i play with controller are action rpg.I usually just go passive builds as i am lazy af

.I doubt asylum or mamba would have a problem with implementing this into there mods as it’s a camera mod it doesn’t physically change the game play of the mod.Having this with super spawn can actually be fun to see there twisted smile while they pounding on you

I doubt asylum or mamba would have a problem with implementing this into there mods as it’s a camera mod it doesn’t physically change the game play of the mod.

Actually it does physically change the game play as it is locked in super close by default. I doubt they would add it in to their mods as-is… certainly not as restricted as that.

Another option instead of merging mods for someone who decided to use this mod
permanently is to hard mod the game with it and then use custom mods on top of it.

If the issue is the super closeness, I could try to release a version that has the closeness but also allows normal camera play for grimarillion or anyone else who would like to merge the mods. I did not do that at first because in my first experiments with Grim Cam, it seemed that having more camera positions available made the fps drop overall, so I locked close in for better fps.

However, I am not sure if that is an issue solely with Grim Cam as I`ve not tested otherwise. I might release it this weekend.

This simple mod really does literally give a new perspective on the game.
I not only intend to play with this much more, but it is also going to lead me to learning how to merge mods, so I can play with this camera angle with other content.
Thank you for making this mod.

@benderwaka
You should try modding, it is actually fun. Much better if you have friends who are receptive to changes. There are a few quirks in regards to the tools but once you figure them out, it is a nice experience.

On a side note: I sent a message to ASYLUM101 asking about a merge with grimarillion. Let’s see what he says.