I have been playing on Alcoholics with a melee build and a freak ton of health regen (that helped me survive the rogue dungeon near the conflagration).

One thing I noticed when playing is some purple elites (I guess bosses) are not as hard as they would have been, because they are often lower level than I am, sometimes severely so.

I am just now entering act 7 (last expansion) at level 94 or 95! Of course, I am playing normal difficulty otherwise with veteran checked.

This mod contains cosmetic wings as medal illusions. However most of the wings needs to be adjusted for the male model. This is mostly resources for other modders. Anyone is free to use them as long as I am credited and the source : Aion wings from Aion Pride wings from Darksiders 3 I fixed the Pride wings animation and made some smallers version (use pride_idle_60.anm for a 60% size version, exist also in 70,80% version). I won’t bother fixing the aion wings. [image] [Wings_Mercy] [k…


Hello ASYLUM101 ur mod are really great and i want asking about 1 thing.
can u merge that mod from DoM to Grimarillion?link uper

Is this a bug in the mod or the base game?

They are attacking with poison it seems but no other effects are occurring. Invisible monsters! 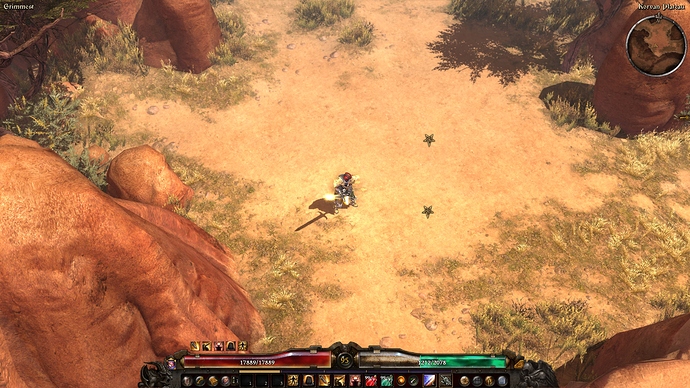 I have seen this too, its one of the insects that normally crawls out of the ground. Looks like a bug of Grimmest. Or maybe a bug from the base game that was prevented by having them not underground.

Can’t fix something if I don’t know what’s broken.

Report again if you figure out what it is because two nameless stars stuck in the ground tells me nothing. I’m not about to test every enemy in the game to figure out which one is bugged.

Ok cool. I figured out it’s because they are under the terrain. I’ve seen it before in Reign of Terror too. Another place in this mod made it more apparent, after I made that post, they aren’t actually invisible. So my guess is it’s from the base game. I think both instances were in Act 7. No worries.

PS. Just got my FIRST level 100 character! I was 100 before even entering Epic difficulty. Thanks to this mod, I’d get bored from the slow pacing and progress of the base game, but I was that way with D2 as well.

EDIT: One more thing. Since I was playing in Alcoholics I’m guessing it has to do with Grimmer and Grimmest and the extra spawns. That is, if it’s not from the base game. Guessing… That’s my first playthrough of act 7, can’t even verify if I’ve seen it before.

Nevermind, the mod is still a clear downgrade to a base as it was two years ago

How to shards and chunks work in grimillion in shattered realm?

I never see and increase in chunks only shard level.

It’s boss rooms only so no intervening chunks to give you a breather.

Thanks for that about Shattered Realm, that explains alot from my experience getting through the first 25 levels of Shattered Realm. It was very different from what was in Reign of Terror, the only other time I’ve played that part of the game at all. It was kind of easy anyway, and if you are playing Grimmer and Grimmest, the constant nasty fights are normal. I’m in Nihilistic, level 30 near the end of Act 1. Redoing Replicating Missiles build with freeze I failed at a year or two ago with this mod in Elite difficulty. Doing much better in Normal mode.

I’ve been thinking lately that this mod along with Reign of Terror are so good, I no longer have any need to play older games like Diablo 2 (Resurrected will be a curious museum piece) and Titan Quest because Grimarillion is so much better. It’s not perfect, particularly the quick leveling system that ends quickly, but while it lasts it’s an amazing experience.

Talking about this because I believe Shadr_Sabirov was insulting the mod saying it’s still worse than the base experience.

There are other damn good mods on these boards I’d play as well if I didn’t need the specific classes Grimarillion offers, like the one with 50 classes, etc, I could play for infinite value as far as builds are concerned.

I may very well go back to those old classics at some point, but that’s what I’m thinking right now. The Titan Quest modding scene is awkward as I have to quit every game to get past Giza, it’s a flaw in the 10x mod, or whatever it’s called (and the repeating bosses of the same type is odd to say the least, LOL). Grim Dawn works flawlessly in comparison, all I see is very rarely a missing tag on an item, and that’s it.

I’ve really enjoyed the Spirit Mastery I decided to have as a secondary synergy for my build. I’m really enjoying these skills now that I’ve tried my first new mastery.

I personally don’t care about negative people.As long as i enjoy the mod.I am not in this world to make friends.He wants a friend buy a f…ing dog

.People will always look at the negative side of things because they are jealous that they could not do better.I have played Ayslum’s tq mod and it still to this day one of my favorite mods just sad it doesn’t work on anniversary.

This mod are more a down to earth experience.I play grim and dom.Dom i play serious because of the huge class choice.I would rush a character test it out and start a new.In grim on the other hand it’s all about the attention to detail for me.Specially that Asylum added the third person camera to his mod.To see that earth golem close up is

PS:That golem close up looks like hunshback of northedam.I know i spelled that incorrect but i am not English

I was chiefly trying to be positive about Grim Dawn and the mods on this forum than be negative about TQ mods.

The only reason, at least in my thinking right now, to play D2 or TQ is to have a different campaign. I see every Grim Dawn mod benefiting greatly from the base game of superior crafting and passive skills as well as matching levels, to the point where I feel like I’m playing an antique with D2 or TQ. I’ve played D2 for 20 years.

When I play this mod I’m constantly challenged, even at max level. I’m slowly learning how to play better for a full experience.

Well, there’s always the Shadow Masteries mod and the Enchanced Gameplay for TQ. Plus Bumbleguppy’s working on his new version of Legion of Champions for all us pet lovers and he likes to add nasty things into it like the campfires you see in the game really burn you if you stand too near them.

the campfires you see in the game really burn you if you stand too near them.

Also in previous versions, when you opened a sepulchur it could spawn a room full of traps; that was really nasty since it was hard to avoid them. His latest addition is Formicid Egg clusters spawning monsters.

I play shadow masteries.It’s actually a lot of fun.Pity i don’t have much time for gaming though.I am jumping at night between grim/dom and tq

I am getting to old for this

Wow, you make me feel very comfortable for saying I’m 47, but since you winked I’m guessing you’re 27.

Nope, passed that milestone decades ago.