I’m thinking of motivating myself to play through the game with one build (instead of continuously making alts / starting over) by writing up a build journal playing from scratch all the way to lvl 100. Ulvar’s drain essence playthrough write up inspired me.

My question - what skills / classes are not well covered by existing in-depth guides for beginners / starting from scratch?

Some ideas I have:

Open to other thoughts / ideas. Mainly I don’t want to play through something if somebody else has already done an in depth playthrough description.

While I appreciate the advice “just play whatever you want,” I’m having trouble deciding what that is and I think having a purpose like this could help.

This might be cool, I guess you can use Alkamos Warsword/Scythe till you got the Soulrend. Which drops from same boss, then you farm Morgo pieces etc, it’s quite possible to make everything from nothing.

Bleed Phantasmal Blades. The support is rather large, with plenty of good MIs and 2 faction weapons for end game. I’m doing one myself and going trickster but occultist/oathkeeper/inquisitor can work too now that Goredrinker exists

To be honest Phantasmal Blades was on my list, then I tried playing with the skill a little bit and the visual of the ability kinda kills it for me. The projectile doesn’t line up with the character model that well and overall it’s pretty underwhelming. Definitely looks like it was one of the first abilities they created and they’ve never updated it visually.

PB and Dreeg’s Eye (non-transmuter version) are two skills that I’d be way more interested in playing if they looked more interesting.

Re: Fire Guardians – I see that Magi Visage adds to summon limit, though seems intended for a vitality based Oppressor.

Word of Solael is a faction blueprint legendary with +1 to summon limit, but you couldn’t use that as well as Barthollem’s since it’s an off-hand.

What items am I missing?

Cold CT looks cool and has strong endgame build (on the right, Seal changes too)

Use transmuted Callidor along with Shadow Strike and Ring of Frost

That might be a bit too point heavy. Definitely sounds like a piano playstyle but since everything is on cooldowns it might not be too bad.

I personally wanted spam Cold Callidor. There’s endgame build on this forum if you’d like to check it out (although that could be narrowing your imagination).

Btw leveling Guardians would be interesting because you could go to Forgotten Gods early for that additional Guardian. Guardian + some item skill, maybe Obliteration (I’ve got no clue really). But I definitely seen 3-4 or more endgame builds with maxed out Fire Guardians

There is an MI off-hand for that aswell. In FG, I don’t remember the name, something fiery

Edit: No, I checked now, it’s Lightning Devastation off-hand. But hell, you can do cooldown CT and Devastation build

Both Cold Callidor and Guardians sound interesting to me. I do see that Contragor did a write up on Blade Spirits + Guardians already. But I was thinking I’d probably just focus on the Guardians and go Paladin.

Not that I’m writing off those ideas, but if anybody has any other ideas I’m interested to hear 'em.

But I was thinking I’d probably just focus on the Guardians and go Paladin.

That would be interesting for me and definitely harder than Acid or Vitality Guardians. Maybe you could add some item skill to it if you lacked skill points and needed it. Skills granted by items [video, GT links, damage types, source item types] Also Occultist / Demo would be a good second mastery. Honestly, there’s a lot of stuff that can be done.

Check out this change.

fixed this amulet so that it’s perfect for Fire Guardian Paladins: 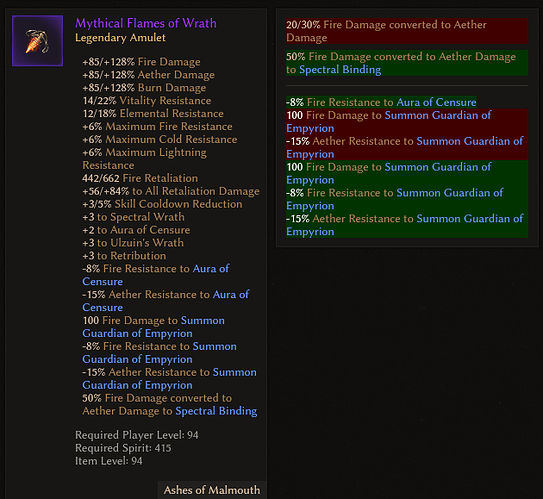 My question - what skills / classes are not well covered by existing in-depth guides for beginners / starting from scratch?

Ranged builds (guns, rifles autoattackers), pet builds (we have Mayas carnival guide but that is old and is not a build journal), sword and shield tanks (one idea I had for my poll thread was to have retaliation build or a cadence version of stupid dragon death knight build).

I am also a bit surprised that no one (?) on the forum has yet done a straightforward fire BWC/Canister bomb sorc/shieldbreaker caster. Perhaps such build is a “no brain” build?

Evil Baka made such build, the ruinous apostle. But not with Rag’Nadar rifle.

Sounds fun, but what option are there for budget endgame weapons? There is vitality 2H axe for BH, but nothing for cold that comes to mind.

I will DM you a few ideas/sketches of mine