Although I haven’t tested this build out and not skilled in pet builds, lately, I’ve been thinking about a build for a Vitality based Conjurer that utilizes on Hellhound considering its buffs and the Briarthorn and its items overall getting heavily nerfed. It is a vitality based build that while mainly for necromancers, but in this case, it’s for conjurers.

The Lost Souls set while mainly used for skeletons, it has bonuses for Hellhound. Hellhound received some buffs in 1.1.9.1 for some items and 1.1.9.2. I think Hellhound and its items will be buffed even more depending on future patches if 1.1.9.2 indeed comes out.

I mainly use green items on pants and belt and the medal, since I geared it toward high SR levels. They have more prefixes and suffixes than the usual purple items. Here are some of the reasons why I put the items there. I won’t say too much considering most of the info I explain here are self explanatory:

Lost souls Set: It’s for the Hellhound overall and having one extra Hellhound. Also it includes Vitality damage which is the main source of DPS.

Mythical Necrolord Shroud: Primarily for the vitality damage from the Aura skill. Also it gives good affixes for survivability for pets.

Fleshwarped Archive: Gives extra damage and support to Hellhound while giving extra affixes. In 1.1.9.2, it seems that the caged souls suffix will be replaced from Blight Fiend to +2 to Ember Claw which is decent.

Medal: I put in a green Halion crest for the extra attack speed to Hellhound and also giving 6 more seconds to Primal Spirit. Again, ideal prefixes and suffixes for this one. You could go with Overseer for more crit damage and slow resist towards Hellhound and Briarthorn or Beastcaller’s Talisman for extra physical damage considering its big boost for Hellhound in 1.1.9.2

Relic. Mogdrogen’s Ardor for +1 to skills primarily considering Bysmiel’s Domination seemed to have a nerf. it’s debatable if you want to use Primal Instinct for having extra single target dps.

Boots I put the boots for pet speed overall. Otherwise, you could use Fiendflesh Greaves or Deathwalker’s grace for survivability

Components and Augments: I geared it toward high SR levels. Seal of Resonance for CC reduction towards the player, for that it can be a difference for SR. Otherwise, you can go with Seal of Might if pets don’t survive as much. Also, pet resistances for the rings and amulet

Max Hellhound, and put in Ember Claw for aoe and Hellfire for survivability. I took out infernal breath since it doesn’t seem as useful of a skill for me personally. I also considered it for dealing with Crate of Entertainment boss which is catered toward single target boss. Note: Ember Claw will not be +11, but +13 considering the change to Caged souls suffix

Summon Familliar: I put it in there for as a support pet and I like all the pets in there. But you can take it out and put points in Mogdrogen’s pact for more physical damage or Ember Claw for aoe.

The usual pet ones such as Sheperd’s Crook for dps. However, I put in Dying God for more dps and geared towards vitality damage. Ulo is used for resistances and dispelling buffs from enemies.

It seems that it doesn’t give as much DPS in that build. However, I will need to give it a shot when I have more money and crystal to spend it on changing devotions and skills. Also, the pierce resistance for pets in this build is not good. Also, the aoe dps may not be ideal as well.

Here’s what the item gear would look like ideally: 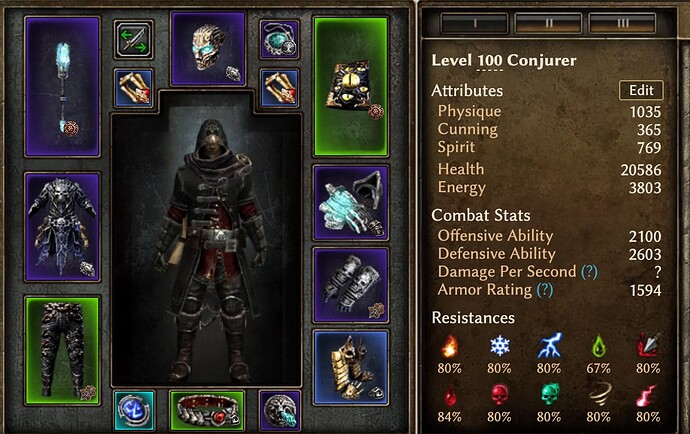 even this, better, bro.

this one build by my friend

@111473
I think the OP is not interested in playing a cabalist. He wants to play a conjurer from his build.

something like this is what I am looking at:

You’re correct, I was making a Conjurer build for this one, although the builds all of you posted here are good ones to consider.

I was just wondering if your build is more defensive either for crucible or higher SR since it looks like you don’t use Sheperds Crook, Elemental Storm, or Dying god for this one.

My build is based around being able to do SR. It is not designed for crucible. It has a lot of survivability to make sure it can make the timers. I also hate piano builds. Crook is more damage but it comes with the tradeoff of having to proc it constantly. With all of the +vit damage to pets not shown in the pet damage panel the build will still put out decent dps.

emmm… for conjurer… why not use Nature’s Call Regalia… Shepherd of Lost Souls is not very fit to conjurer.

Shepherd have a lot bonus on skeletons, this part will be wasted.

Beastcaller has been played to death. Sometimes it is good to look for alternatives.

sure, but the intensity are not equal. It cant perfectly instead.

By the way, for this build, need one spiritbinder glyph ring for 100% converted.
And add some point in infernal breath, reduced dmg can save chara’s life.
And wolf is better than dying god.