Point & Counterpoint:
@Maya’s Pet Deceiver is found here and has not only been able to beat Crucible and high SR, but has beaten Celestials as well. All that was needed? One Bysmiel’s Bird Set

I’ve tried to duplicate similar efforts through the Hellhound - the only way I’ve found that could fill all of Hellhound’s skill points is to grab +5 in Occultist skills (which is not easy to do in a pet build by any stretch, especially if you can’t afford to grab Mogdrogen’s Ardor) while using the Sovereign Amulet which only works with Fire Hellhound. Even with the most investment in a Hellhound build I can muster, I can only get to SR 70 before things started to go sideways. That’s still a good accomplishment, mind you, but this is near the absolute limit on how many skill points you can give the Hellhound while singularly focusing on its Fire Damage.

I might have mentioned this earlier, but for the Lost Souls set to grant 2 Hellhounds but take the amulet (good-bye Sovereign Ruby), weapon, and helmet slots and not give +1 to Occultist skills in any of them is a bit of a travesty. The Chaos amulet is useless because at that point you may as well go full Lost Souls, where you get enough Vitality to Chaos conversion to make up for the lost flat. Additionally, it doesn’t help that Infernal Breath has a significant DoT component that doesn’t get converted.

Also, if you’re not doing Chaos, then Chaos only has the Chaos to Fire conversion shown above, so you’re really pigeonholing yourself to either Fire (which works ish) or Chaos (where you have the blue set that gives a lot of skill points to Hellhound and Familiar, but only converts 50% of Elemental to Chaos. What’s the other 50% supposed to be converted to?). Vitality would be a neat option since there’s the belt that gives +1 to Occultist skills and converts Elemental to Vitality, but the only option for converting Acid to Vitality is the Blood Orb, and that converts Elemental to Chaos, so your flat damage conversions will be real wonky (not to mention getting getting Chaos RR is hard enough without handicapping yourself to get both Chaos and Vitality RR). Additionally, Pyromancer Hellhounds would be really neat, but there’s 1 set of items in the whole game that gives both +Occultist and +Demo skills, and Demo has the worst pet itemization out of those that actually attempt to make pet items.

@afanasenkov26 posted in the bigger 1.1.8.0 thread about how lacking Hellhound is, so I wanted to make suggested buffs in its own thread. My solution? Give a modifier that converts 100% Chaos to any damage type that applies only to the Hellhound. Cold would be my first choice because there’s the faction medal that converts 100% Fire to Cold, and an Arctic Wolf would be ballin. Other options for modifiers could be Chaos to Acid, Chaos to Vitality, or Chaos to Aether (since we convert 50% Physical to Aether and 100% Elemental to Aether, this could end up being a really cool modifier if it was placed on the right equipment).

I think Lost Souls deserves to be its own thread - it’s actually really sturdy, but is really slow in terms of clear times. I want this to specifically focus on the Hellhound. 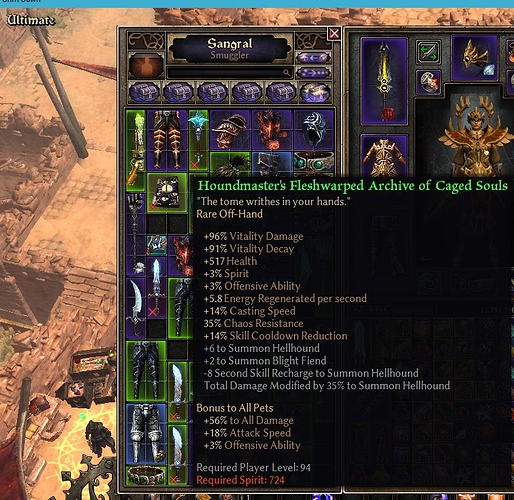 Too bad there aren’t any good options for it, since the other total damage modified by 35% is in Zaria’s pendant, which is locked out by Lost Souls set, Bysmiel’s Set (as Raven >>> Hellhound if you want to focus on an Occultist pet), and Sovereign Ruby of Domination, which is the best Hellhound amulet you can wish for between the skill bonuses and the sweet burst proc.

I attempted to use it for my Hellhound Conjurer, but ended up having to use Eye of Dominion instead as the build struggled with getting enough pet resistances. Chaos Hellhound is rendered obsolete by Mythical Fiendgaze Tome, as it gives +1 to both Occultist and Necromancer skills, big Physical to Chaos conversion, 100% Cold to Chaos (so you can get full Chaos Reap Spirit), and a proc that gives -15% Chaos RR. I also forgot to mention that the Occultist Conduit that converts Hellhound’s damage into Chaos is also obsolete by the Chaos RR to Bloody Pox mod, as RR is the hardest thing for Occultist pet builds to get.

Mythical Warpbreath Arbalest is a really interesting item, but it’s a pet Chaos weapon and there’s no way to convert Hellhound’s fire damage to Chaos if you’re using the Weapon Slots. Even then, it raises the question as to what to do with the Burn Damage? Keep it as Fire / Chaos as both are raised by Hellfire and use the same RR devotion in Witchfire? Unfortunately, neither Demo nor Inquisitor have enough skill bonuses laying around to make it a viable concept, and you won’t get enough RR if you try any other class combination.