This is a team support healer that can take on tank duties too. Not really good for single player. Works well in deepish SR on a team. Does almost zero damage, with team buffs against a level 92 Valdaran in SR75 the damage worked out to ~200k DPM.

But, damage isn’t what this toon is for.

Seals are at 22/12 and are quite helpful for the team (Word of Renewal and Blood of Dreeg at 22/12 and 26/16 too), has six burst heals for team, the amulet and helm give some fairly unique -rr for phys and elemental that others on the team aren’t likely to have, the pants and chest both give team speed and damage buffs - two war cries for the team, does around -470 DA to enemies over a few skills, numerous damage reductions to enemies, OA and damage buffs via skills for the team, lots of phys resist (29% phys) to the team, etc. etc.

I’d say this toon does a solid B+ job as a pure tank and a solid A job as a healer. Maybe not the A+ version a dedicated toon for each of those roles may be, but this is pretty close for a toon that can do dual roles. Cally, Ravager, etc. cannot hurt it, I’ve been the sole healer / tank in SR145+ and it does alright. Anyway, thought I’d share.

It all went well for about another 30 seconds, before Valdaran got angry.

But thought I’d share, toon can support a damage dealer well, with a proper tank it can really chooch. 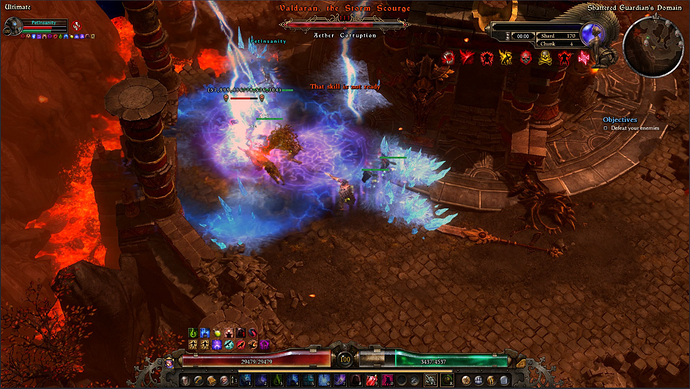