So while finally remembering I needed to test out some adjustments to a previous theory crafted build I released that with Chillheart I could make a new melee based build, and after much around in Grim Tools for an hour fixing resistances, skills and checking which items worked best in each slot, I’ve come up with something that might just work. And it’s a spellbreaker, because IEE = lots of flat damage to covert.

The idea is to take the flat elemental damage IEE gives and covert it all into cold via Chillheart’s conversions from fire → cold and lightening → cold to give tons of flat cold damage and stack some more from Beronath’s Fury and converting it’s elemental damage. And leveraging synergies in the rest of the gear to get enough points to hard cap Night’s Chill for more RR giving 86% in total I think in conjunction with devotions and the amulet along with getting enough skill points for everything. And covering resistances properly…

Guessing there’s a major flaw or it’s too meme-y, since no one else has posted this build

So gogo the adjusted base build (added more points to LA):

Main issues - the rings, probably should change them (legendary Alkamos set are probably best), though the +%OA + the WPS +skill points = almost too good to let go of. While the devotion path probably needs redoing for melee survivability, but given this has 4 circuit breakers, should be safe-ish. And whether or not Ring of Steel needs so much investment. And general allocation of skill points, because guess who had a crap night’s sleep last night? Fluffing atmospheric rivers = too hot to sleeeeeeep properly.

Now I just need to clone my testing save to test it out :3 Or if someone has a level 100 blank save with all the +skill points etc done, but Ravager not chosen and moggy not yet killed, that would be very useful. Because I still haven’t got my testing save up to those points and it’ll take me days and some GD stash editing to remove excess points.

Still working on Nidalla’s Bastard too - I’ll post the newest version after I clear Crucible 150 with only freeze and health pots a couple of times to farm tribute points and learn the crucible. After I have some fun with my old Mad Lad spellbreaker first of course. Because it’s even moar fun with the change over to Seal of the Storm.

Or if someone has a level 100 blank save with all the +skill points etc done, but Ravager not chosen and moggy not yet killed

Thanks, last time I went looking for one google couldn’t find a current one. Going to be super useful :3

And lo, the damage!: 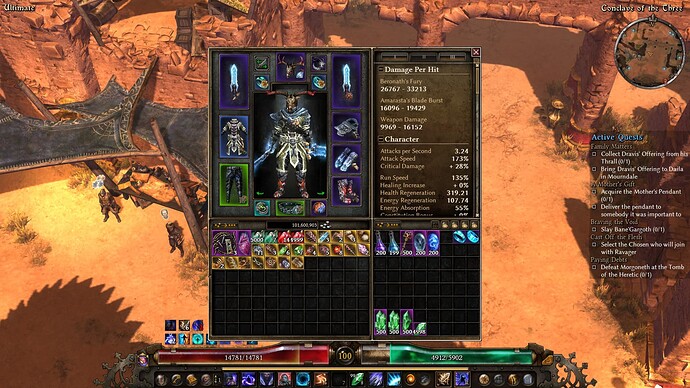 Used an older version of GD Stash and didn’t make the MI’s properly so had to adjust the build a bit, but I’ll fix that later. Along with the resistances, because I didn’t realise I was in normal difficultly when I started…

So far it’s managed to deal with two bloody Alex’s spawning in SR70 and survived them, but I died because I’m tired and forget to hit Blade Barrier or Mirror >_< And then died again because Zantarin launch their shotgun attack when I used SS to hit them lawl. Ran into Moo-kins and was able to kill quickly too despite their high cold resistance.

So, so far it’s pretty decent. Probably should re-do what’s proccing each devotion though, just to get them procc’d effectively.

Think I’ll stick with the blue rings as the 5%OA they give is just too damn good and the freeze resistance is mint in SR for going naked. Needs moar physical resistance, but that’s spellbreakers for you.

I think it’s a standard to play SR and Crucible without pharma, well at least SR75. But Crucible with 4 buffs and 3 Storm Beacons. Another standard is Naked Crucible with extra spawns but without buffs, banners and pots but this is for more more durable characters.

For Super Bosses players usually take all pharma they need, but sometimes attempt no pharma as well.

I think pots in SR are for deep SR pushing. If you can do 70 speed farming 65-66 might be the best bet. Cool looking build as well.

Some of the pharma does help in SR, especially that health potion.

But as mentioned before SR 65-66 or even 75-76 is possible without extra help but depends on piloting. Crucible is runned with beacons these days but one death in 150-170 can cost lot’s of tributes, so can’t really recommend people doing it for farming without super reliable build. Naked runs don’t cost buffs tributes but they still require 25 tributes to start the wave, so build needs to be tanky to beat it once every few times. 100-150 is more plausible scenario or doing lower Crucible tier.

Speaking of the build itself, I am generally curious if converting elemental to cold is worth on this Breaker over my favourite Chillstrifes. I would also make the build more environmentally friendly, like Elena’s necklace for instance. Also like Iskandra relic for more damage.

Speaking of the build itself, I am generally curious if converting elemental to cold is worth on this Breaker over my favourite Chillstrifes. I would also make the build more environmentally friendly, like Elena’s necklace for instance. Also like Iskandra relic for more damage.

Necklace wise - due to only nightblade having -%RR for cold I prefer to stack RR first, because every percentage point of resistance an enemy has is a point of damage you can’t do. Elena’s could definitely work though, as could an amulet that gives +1 all skills until you find Myth. Night’s Embrace.

Relic wise - True, but there’s not quite enough points to around with the current set for Nightblade, since Dual Blades line eats points and I need to push PB beyond the softcap to get more attack speed (and OA).

As for conversion - it adds another 2000+ damage when used with just softcapped IEE. A little bit more with 14/12 but not quite enough for the points used to make going to 14/12 worth it imho. Not when LA provides more flat cold.

Also from mucking around in GD Tools, using Myth. Deathmarked shoulders adds another 1000+ damage from converting acid to cold and +skills to Dual Blades. But results in a loss of stun resistance to only having 71%, so I don’t think it’s worth it. Wish though there where other pants and belts I could use to get resistances and skill points, instead of GD Stashed MI’s.

Modified it slightly, as the Seal of Might is needed for 4% physical resistance + fixes pierce and bleed resistance, fluffed around with armour augments again to fix resistances and got a better belt with 5%+ OA it give me +3600 OA to now proc Hand Of Ultos constantly. Changed Elemental Storm to Ring of Steel to proc it more controllably, Rumor is still bound to SS though, but I might change it to ABB simply because that allows me to leave SS for movement.

Did a SR75-76 to test it out and this build is pretty squishy, if you don’t hit and run when the circuit breakers are on cooldown, which I did and died. Kuba’s the worst to deal with so far, simply because by SR75 he’s stacking obscene cold resistance, but also ran into a Cthonian hero that healed every enemy, causing yet another death until I used Typhoon to escape.

So now carrying a stack of cursed tinctures for the next time I run into Kuba and speed clearing bosses in the boss room. So far though, most nemesi are push overs thanks to all the circuit breakers. As long as you cut and run when they’re all on cooldown.

Don’t and death is certain.

As for PVE - cleared Tomb of the Heretic finally, died my first time due to not running from the boss in his 2nd phase/using BB, got him the 2nd time. Cleared everything with no pots too and from my 2 runs got 2 legendary Magi rings O_O Unfortunately Lokkar and Bourbon aren’t unlocked on this Tester save, so I need to go do those. But will hopefully test out the Ancient Grove tonight, though need to cook a curry, so might not have time/energy. Why? Because Gargabol is always a good test of a build for me, his 2nd phase is my personal nemesis lawl.

Anyhow, hopefully _ya will have some useful criticism since I can see them replying while typing this

But yeah, so far, this is a pretty decent build. Not the best mind you, but like ye olde Double Stormheart Sab it’s pretty fun to play with. And it seems like no one else brought a spellbreaker build like this, this far. Probably due to RR issues or the glassiness of it + the whole needing MI’s to patch the resistances/boost OA to crit everything levels. So I’ll probably do a write up post for it.

Because I still need to finish off that Witch Hunter and the Mad Lad spellbreaker with 100% lightening to cold conversion ;-;

Wow! That’s really lucky. I have run that dungeon at least 40 times when farming Morgoneth set and never once got a legendary Magi ring.

Right, so mucking around with the MI’s to see what affixes work and basically - Amarasta’s Flurry is pretty vital since it adds chaos and bleed resistance to the build. But ultimately as long as bleed and chaos resistance are covered, by 1 or both MI’s, it seems they’ll do pretty well.

edit - as for chest pieces, so far the Myth. Vestment of Mourning works best, simply due to it’s +skills, but the Myth. Stormweave Armour can also work, you just have to move some points around. So would Fateweaver’s Raiment.

Also looked at using 2 parts of the Deathmarked set, and sadly they lead to less damage, which is weird. Head wise, Mageslayer’s is the only real option, but the lack of -%RR is a pain. As there’s not much more that can be done for RR with this build.

Edit-2 Forgot, it can get up to +32k dps with Beronath’s Fury at 6 and LA active, can’t remember if that takes into account WPS though.

Er, brain failed a bit there - Using chest and shoulders of the DM set, it gets an extra 1000 dps: Spellbreaker, Level 100 (GD 1.1.9.4) - Grim Dawn Build Calculator Main issue is that the skill points and loss of OA since this build needs high OA to proc Hand of Ultos for it’s RR enough to reduce enemy resistance.