[Tool] Core Switcher - Force GD to use all cores equally!

Not sure how helpful the task manager is since it doesn’t say much.

Not sure how helpful the task manager is since it doesn’t say much.

Expand the arrow next to the TQ process please so I can see what is under it.

and in the Resource Monitor is it showing 4 cores there for you or 8? I think it’s just a quad-core but I want to be sure. Open it up, then up top click “CPU”. 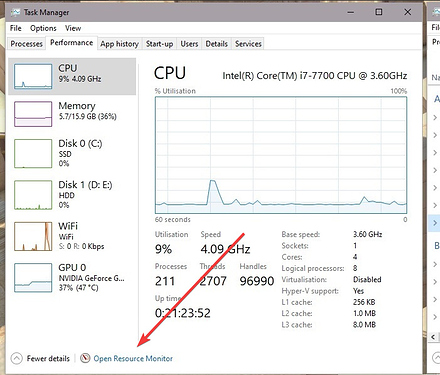 Wasn’t really clear in there, but I checked the dxdiag and it’s 8 cores

Wasn’t really clear in there, but I checked the dxdiag and it’s 8 cores

Ok… but as I said opening up Resource Monitor literally shows you everything. Doesnt get much clearer but we’ll go with 8.

I still need to see what it says when you expand the tq process in the Task Manager medea. In order for the script to work I need to know exactly how Windows sees the process, how it’s spelled, if there are spaces in the name etc. /waiting

Well, all I could see in there was it was mostly 4, but occasionally going to 3 or 5.

Well, all I could see in there was it was mostly 4, but occasionally going to 3 or 5.

If you are seeing it go up to 5 then it is likely an 8 core. Just to be clear here the Resource Monitor doesn’t show you some of the cores some of the time - it shows all of your cores all of the time… 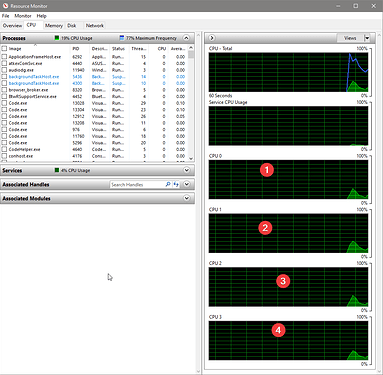 if you had 8 this list would show 4 more cores. CPU 0 is Core 1, CPU 1 is Core 2 and so on… I’m not interested in what cores it’s “using” but how “many” Windows thinks you have - which is what I was looking to know.

Anyway, I went ahead and said screw it and installed TQAE to make double sure it works.

From what I can see TQ does behave similarly to GD, using primarily one core (not at 100% like GD tho but fairly heavy) with light activity on the others. When I first tried my script it did not respond at all while in-game… so I tried it while tabbed out of the game and it worked. They must have something in the game preventing outside hotkeys from working while the game is active at the forefront. I have no idea how they do that but it seems it is so. But they work outside the game and toggling the core did indeed, for me, force TQ to use all cores equally. 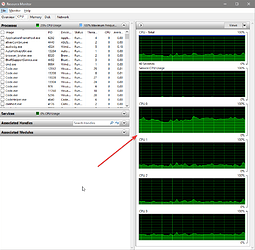 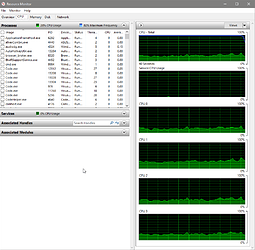 Yeah, it’s definitely 8 cores, I didn’t scroll down of course. Told you I was a newb at this sort of thing.

Does it matter where it’s extracted to? I tend to put TQ related tools etc, in My Games so they’re near to the save files, but I have copies of the game on both Steam and GOG so don’t know if that would make any difference to the extraction location.

Does it matter where it’s extracted to?

It can be placed and ran from anywhere you put it.

Anti-virus threw a wobbly so had to allow the programme in, but yes it works powbam! Did see an improvement across all the cores.

Would you recommend using that zip file over the other one you made for GD? What I want to do is post about it on the TQ discords and in the TQF forum as well since a lot of people seem to be suffering lags, etc, in some parts of the game. Would it work with consoles as well do you think?

To be expected and nothing to be concerned about. You can always send it to your AV provider to allow them to scan it, look at it, and then whitelist it in their updates so that future users don’t encounter the same hassle.

Would you recommend using that zip file over the other one you made for GD?

Of course. The GD ones will not work for Titan Quest so you have to use one made for Titan Quest. Keep in mind that the script I just made you will ONLY work for CPU’s with 8 cores. If someone needed one for a CPU with a different core count I would have to make it.

I would also iterate that this also ONLY works for Titan Quest AE version - to do the “original” one would require a slight tweak to account for it since the executables have different names.

Would it work with consoles as well do you think?

I’m going to go on a limb and say that I highly doubt it. The only way it “might” work on console is if the user had hacked a custom ROM onto their console to give themselves unfettered access. And even then it probably wouldn’t work unless they made a similar script unique to the console’s own operating system (usually some custom flavor of Linux - unless it’s an Xbox, in which case M$ probably uses some custom version of Windows for it).

Hey Powbam, I’m playing Grim Dawn on laptop with an i5-7200U, I believe that CPU is 2 core and if I want to use your switcher which one should I use?

Yeah, I didn’t expect it would work with TQIT, but I don’t know if people are really suffering with lag on that. And also didn’t really expect the console either, but just thought I’d ask.

Hey Powbam, I’m playing Grim Dawn on laptop with an i5-7200U, I believe that CPU is 2 core and if I want to use your switcher which one should I use?

Ah was wondering when I’d get a dual-core user. Be interesting to know if this works the same on dual-cores.

Thanks Powbam, I’ll try it rightaway

The 2core. If you are in doubt about how many cores Windows thinks you have just use Resource Monitor. You will always be able to clearly see how many that Windows sees.

The 2core. If you are in doubt just use Resource Monitor.

Is that your CPU as well or are you looking at my picture, which is a picture of my quadcore?