Add movement speed spread out in this 3 devotion: Mog the Wolf, Huntress, and Fox. The total value I think should between 12-15%.

And to Berserker. I have no idea why you don’t get any speed from a constellation based on a berserker…

I don’t think that any special builds are needed in this particular case.
The reason behind the suggestions is very simple:

And witchblade prefix, have we ever seen a pet build wb for over centuries? I think some affixes should be tweaked so they can be used again.
For examples, Glacial/Resonant/Rimefrost, of the grove, of the voidfire etc…

I think some affixes should be tweaked so they can be used again.

But man when you roll class affixes on an MI that also boosts a skill in your class, holy hell is that exciting! I remember i got like a +5 Warcry on something once, and I think I got a Steward’s Halberd that gave like +8 to Cadence, something insane like that. Only happened to me those 2 times in all my 3k hours of gameplay but, as you can see, I never forgot about it!

Rimetongue’s Grenado Saboteur Damage Type: Pierce [1.1.9.0] Rimetongue’s Grenado Saboteur GRIMTOOLS Having made the Gildor’s Pulverizer Pierce Vire’s Might build, it was natural to try out the Pierce Grenado modifiers. Knowing the difference between a 1.2 sec Vire’s Might with mobility and 250% Weapon Damage boosted by Lethal Assault and a 2.25 sec Grenado meant to be used at range, I was ready to be disappointed. No Ascension & Ulzaad’s Decree for huge damage boosts (Without Ascension, I don…

Rimetongue was changed in 1.1.9.1 to revert the conversions, meaning that this build can get 100% Pierce Grenado with the full set. Observations with the build:

I’d like to expand a little more on my original post about my current Cold Pet build with the Winter King sword. Here is the current version of the build.

I’m starting to have problems with damage output and i believe the culprit to be the lack of full conversion of Physical to Cold. The Heart of the Winter King aura only gives 50% conversion and it’s pretty obvious that this is meant to incentivize the usage of the sword with the crown. Except that this isn’t good because this is the only incentive and it’s starting to feel like an obligation.

I have committed a lot of my devotions to RR and it’s starting to feel like this isn’t enough. My Pets deal 50% cold and 50% physical but i don’t have any phys RR (only flat from Bysmiel’s Command) and the damage feels wasted because of that. I have a lot of cold and elemental RR and i believe the damage output would be a lot higher if i had full conversion. However, if i drop the beastcaller helm for the crown then i’m still losing a ton of damage because of the loss of the second briarthorn.

My suggestion remains the same: incentivize the usage of the sword + crown combo a little more by making them a two piece set with some minor bonuses. I have another suggestion, however. Move the cold conversion from the crown into the Heart of the Winter King aura (or directly into the sword) to make these items feel a little more independent from one another when it comes to a Pet build. The crown could keep its lightning to cold conversion and spawn its own little niche of meme Pet builds. This will make these items better for Pets and have zero impact on non-pet builds using them.

My dream would be for this time https://www.grimtools.com/db/items/2488 (Empowered Stake-Thrower) to get a mythical rare or even legenday version with a no cooldown bomb throwing skill.

Maybe some day… Sorry not on topic

Weird, you mistyped no cooldown aegis

It’s not so rare as Rentless prefix gives + 4 to Cadence, as well as of Kings suffix + 2 War cry. And they are classless affixes, which are nice. It would be nice if class affixes (mostly prefixes) give some res or total dmg rather than only 1 useful and 1 useless skill bonus.

Mythical Divinesteel Hauberk is a unique armor that focuses on defense, but I haven’t seen anyone using it lately, but I haven’t seen any examples of builds that use it recently. so I think it deserves a little more love.
Physique(4-6%) instead of Constitution is better.
Light Radius looks not too useful as well, but personally I like having this.
As for Toggle Skill, instead of getting some extra resistance, why not change it to 2% max resistance?

I haven’t seen anyone using it lately, so I think it deserves a little more love

Awesome argument. The character I’m playing right now (Warder, 2H with Savagery + Blade arc) is wearing it. You missed my house on your trip around the world.

There are like 10ppl posting builds on the forum. Based on that people do not play this game at all. Ded game

Awesome argument. The character I’m playing right now (Warder, 2H with Savagery + Blade arc) is wearing it. You missed my house on your trip around the world.

Have you posted the build anywhere? I missed it. And if you can, can you tell me what you think of Divinesteel Hauberk’s performance?

Have you posted any builds yourself? Based on that I draw the Conclusion that you dont even play this game.

Have you posted any builds yourself? Based on that I draw the Conclusion that you dont even play this game.

I was using this armor in Physical AAR Battlemage a few patches ago. and at that point, I made the same request.

I think Divinesteel Hauberk toggle skill is better to raise Fire / Vit / Chaos Max resist. The extra resist is not bad, but basically everyone sets it to exceed 80, so there are many situations where it is more convenient to simply increase the Max resist than stacking resist. The addition of Max resist is also useful for settings that cannot earn Max resist with accessories.

I made a full thread for that idea 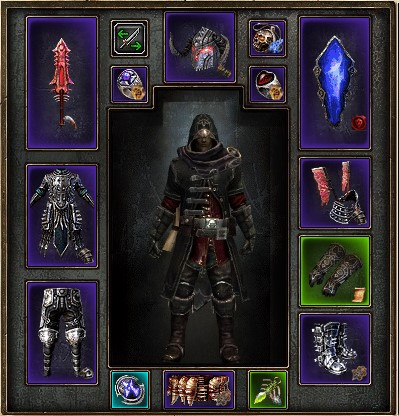 The build is good enough for the main campaign and the RL dungeons. It is a fun build to play, but its overall efficiency is limited, maybe by the lack of support of the Shaman mastery by vitality-melee related items. Such items usually only support Devouring Swarm (e.g. M. Boneshatter Treads and M. String of Maggots). Of note, M. Wendigomane Leggings does support Blood Pact, but I went for M. Dread Knight’s Legplates for its support to Reaping Strike.

Moreover, as @fordprefect noted, we don’t have access to a good pair of gloves combining both flat vitality damage and AS.

… and until my dying breath:

now we have so much conversion avail on items it’s simpler to make things work. But the baked in Vitality transmuter on PB means either you sacrifice a ton of native dmg going out of your way to make diff dmg type PB’s work, or you go no transmuter and nuke with a bit of CDR
However, it’s basically impossible to stack CDR on chaos PB, as all other mods give cold transmuting aside from groble offhand.
Removing vit transmuter on Frenetic Throw i understand could open up spamPB too easily to too many dmg types/being a balance overhaul nightmare
But since there are 0 items with chaos dmg and PBline support, means you not only do you have to go out of your way to get conversion, you also have to sacrifice +%bonus dmg for PB+skills;
^while still ending up with less than meh cdr-less “nuke” or lackluster spam blades https://www.grimtools.com/calc/62aalqO2

Increased drop rate of Ugdenbloom from Rotting Stumps and Ugdenbog Golems, for real this time

I’d like to see a Mythical version of Circlet of Burning Rage and the cooldown on this item lowered into the 1-1.5s area, or lower if daring