Was planning to do this one for quite a while but the Decree of Malmouth simply wasn’t dropping. This is a pretty straightforward Vitality Rune of Hagarrad Caster using skill mod from Conduit of Runic Whispers and Decree of Malmouth. 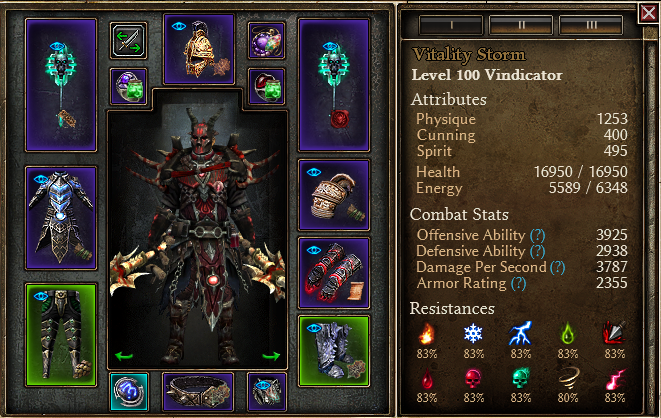 Why has Ultos been picked over Manticore?

OA, Crit bonus, Flat damage for conversion and decent proc. Manticore is also an option, go with whatever you prefer.
Devotion is flexible with exception of Rattosh and DG as those two are mandatory to the build

Why is Non-Mythical Riftwarped Grasp BiS?

I don’t have it but that proc looks too sweet to pass up. So if anyone has it then I recommend try it.
Solely for the proc I am calling those gloves BiS.

Why is Blood Pact here?

To be perfectly honest we have too many skill points so spend them wherever you wish
Skill points are plenty so use them to your liking.
The small damage bonus is why I went with blood pact.

Mogdrogen’s Ardor with %DA completion bonus should be better. But you don’t need it as you already have too many skill points as it is. So Vengeance is more than good enough.

Have you tried Lightning Tether/Storm box?

The damage from Lightning Tether after 100% conversion was too low, not to mention an extra button to click reduces your QoL.

Why is Seal of Blight here?

Seal of Blight has relevant %damage bonus and more importantly crit bonus. You could use Chaos Strike but I don’t want an extra button.

I initially intended to add a mini-guide to this thread for Vitality Storm Totem conjurer, but after the recent patch I have decided to post it in a separate thread.

Decree of Malmouth is a great addition to the game as it opens up various build possibilities including Vitality Savagery build.

I had fun with this build and hope you guys enjoy it as well.

Looks interesting. Why didn’t you go for the full Light Defender since glove slot is flexible as you say and chest is there just for the proc? Wouldn’t it be cool to have another vitality turret, especially for Crucible?

Looks interesting. Why didn’t you go for the full Light Defender since glove slot is flexible as you say and chest is there just for the proc? Wouldn’t it be cool to have another vitality turret, especially for Crucible?

The flat OA, resist and some vitality bonus is the reason why I picked Riftwarped Gloves (I want the non-mythical version for the DB proc but can’t get them to drop)

That LD “turret” is far too weak, not to mention it’d be another button to push. I initially tested with Lightning Tether and boy was that a PITA to pilot so another weak skill doesn’t do much for us

Sorry was typing in a hurry

Sorry was typing in a hurry

Guide has been formatted