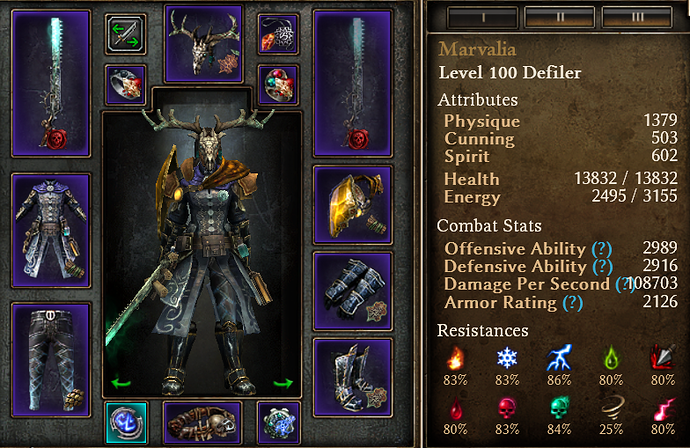 The story behind this build is simple: I took the worst possible class, one of the least popular concepts and one of the crappiest weapons in the game. And then I tried to push it to the limit without going green or going Shattered Realm set. This is a gimmick build that was doomed from the start but as far as can tell it cannot be made any better. If anyone is interested in discussing bottom-tier concepts I’d love to hear from them.

The concept of aether Fire Strike defiler was doomed from the start. Combining the two least synergistic and defensively poorest masteries had to result in glass cannon defense that’s lacking in many ways (could be fixed with SR set somewhat). Because the weapon is just horrible and it’s base damage is worse than most 1h pistols (making weapon damage on this build lower than some gun&shield builds), there is no cannon in this glass cannon. So, it is extremely demanding when it comes to skill. To even have a chance at beating Crucible you gotta count seconds on Blast Shield, time your MoT, know when to disengage, who to kill first, etc.

So, in a way, it is fun. Can’t play immortal top-tiers all the time, hey!

I tested Magelord rings to empower procs and free the amulet slot for purple or blue Beronath. Classic binder rings are best and Agrivix ammy is needed for the armor. I theorycrafted with some more Krieg pieces but Fatewiever is needed for the res. Neither demo nor necro have any res in the mastery. And Dawnshard Pauldrons are fucking amazing. Make me wanna use them on every build (actually I did use them on my last 2 top-tier builds: AAR binder and Venomblade derv)

I tested Serenity but aether and chaos res happen to be the (only) two res that weren’t a problem. Ravager helmet and +1 to all anywhere I could get it is needed because there isn’t much aether gear supporting demo (except Agrivix supporting Vindictive Flame).

I tested devo setups with DG completed, with Fiend, without Tower, etc. Imp offers the best boost to damage from all available options, much better than Fiend. Completing Aeon is no good as it doesn’t reset Ghoul and Blast Shield, only MoT. Dying God would be perfect for this build as both crit dmg and speed is low (hell, everything is low…) but would have to drop the Tower or Aeon’s nodes…

I also tried to include a sorcerer version but maybe another time. Aether Fire Strike as a concept is not really encouraging diligent exploration. Sorcerer should be stronger.

Thanks to Mad_Lee for some insight. I didn’t have time to contact other top builders for insight as I was busy lately. But shoutout to them all.

Congrats for being patient with the build. If that was me I’d have quit the moment the 7 min mark has passed :p.

How about vortex of souls? Idk if that has better base damage tho.

Congrats for being patient with the build. If that was me I’d have quit the moment the 7 min mark has passed :p.

How about vortex of souls? Idk if that has better base damage tho.

Honestly, I haven’t tested VoS. I wanted to make a Dreadscorcher build. VoS suggests Magelord rings which in turn suggests going for southern devotions and making it a proc machine. But then you lose chaos on Brimstone and lots of other stuff. Hard to say.

Hey, nice build! A little painful to watch these videos, can’t imagine how you tested all specs.

as it doesn’t reset Ghoul

it does, but not big difference.

If anyone is interested in discussing bottom-tier concepts I’d love to hear from them.

How about vortex of souls?

[quote=John_Smith]
Hey, nice build! A little painful to watch these videos, can’t imagine how you tested all specs. [/quote]

I like to try some slower/squisher builds for a change sometimes. But this, yeah, might have been too much…

[quote]
it does, but not big difference. [/quote]

You sure? I thought Aeon and Belgo/Eternity only reset ACTIVE skills that is those that proc on attack.

VoS Primal Strike of vanilla is no more. Torrent doesn’t bounce a shitton of times anymore, or.do you still like the combo despite that?

But main skill still hits hard.
Something like that. Could say that it’s tanky enought, but funny.

You made not that bad of build.It’s Defiler,so any working build is an achievement!

Btw is it possible to use similar concept on DW pistol build?WPS hit hard with high AS and dismember stone for conversion.

You made not that bad of build.It’s Defiler,so any working build is an achievement!

Btw is it possible to use similar concept on DW pistol build?WPS hit hard with high AS and dismember stone for conversion.

I don’t know of any 1h gun that’s even remotely viable for aether.

Magelord rings and Dismember Stone could in theory let you use some Soul Harvest for flat but 1) there are hardly any points, 2) aether gear doesn’t support Bone Harvest line, 3) you might lose more flat by not using the amulet slot for +1 to demo and converting less fire to aether.

Let us begin!
WIP, but I don’t think, that I can squish more out of this guy with the gear I have. Already used those two (legit!) MIs with a hell-fuck-tonne of resists and I’m truly aware of this being the second reason (and not me being a skilled pilot) after Deciever containing Inquisitor, why this abomination does survive effortlessly in any kind of mess I’m constantly throwing him to.
https://www.grimtools.com/calc/4NOkaYaN

Maybe we should create a new topic, dedicated to low-tier builds?

I’ve tried to make this build before but failed. This version is better than mine but still doesn’t inspire confidence. Think I’ll reroll the character into something else, defiler just doesn’t work.

I know this is a really old build, but I had the idea to make an Aether Fire Strike Purifier and this build had a lot of the same ideas as mine. I’m on the fence whether it’s better as a Purifier or as the OP’s Defiler. Or whether it could possibly be better than Ulzuin.