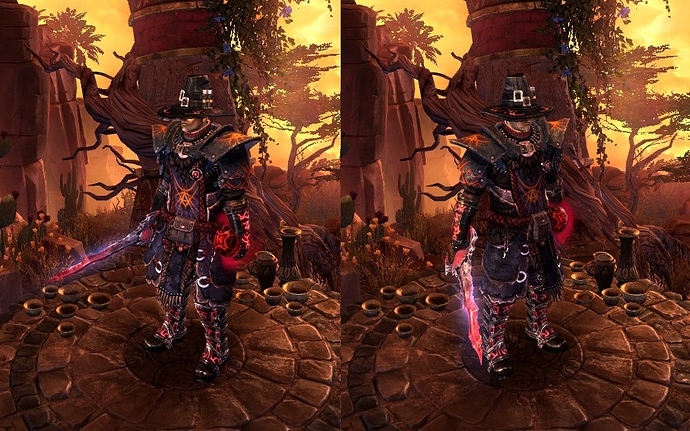 Budget Version - credit to Norzan for this and the build concept: https://www.grimtools.com/calc/L2JOAA0V

Thanks Norzan for coming up with the budget version. Both can likely be optimized further. For Crucible this build could 100% sacrifice more defense for offense.

The important thing is that if you high roll the resistances on the SR version, basically nothing in all of SR is going to break your resistances.

Screenshot of stats highrolled and as many procs as I could get up at test dummies. 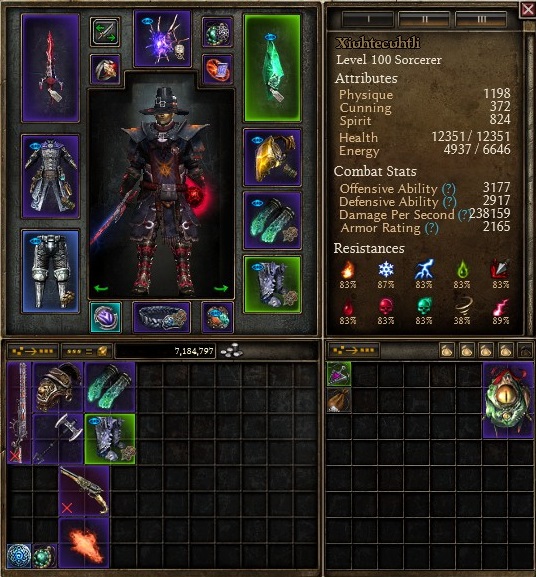 Here is an SR 65-66 run. Single attempt, lazily done, didn’t even pay attention to mutators. Didn’t have seal of resonance:

I can’t wait to see this optimized further. I’m primarily interested in the SR side. I imagine the Crucible side would be pretty different.

Nice build, video is not working.
You want to change completion bonus to +1 Disintegration to hard cap it.

Is it irritating to stop casting the ray in order to throw Flashbang and BWC or no problem at all?

Did you try Mythical Essense of the Grim Dawn?

Video was still being processed by youtube, it’s working now. There’s no problem with the flash bang unless you’re also dealing with skill disrupters in which case it hurts. Essence of Grim Dawn might be better for crucible but the lack of resists are missed in SR.

edit updated Grimtools SR link for relic completion bonus. Also note that Grimtools is not updated to 1.1.4 yet, your OA easily hits 3k with the update.

What is this??? Doomgod posting a build?!?

I kid, glad to see your name in the classes/build section

And good to see this build out

)and classic AAR Spellbinder with Clairvoyant.

Sandstorm of the Oracle are BIS suffix/prefix for off-hand, how well do you think build will do without them?

Another idea (sorry for nit-picking, no offense as build really shines :), but how about completing Rhowan Crown instead of right node in Ulzuin Torch and green node?

Crazy good prefix for this. If you think you can handle the incoming phys damage, you can make due with aetherfire… Thunderstruck is potentially better in some scenarios, all the casting speed prefixes will probably do in a pinch. You can over cap your casting speed with the gear so it’s not hyper important.

Oracle is really useful for the energy cost reduction, spirit, health, OA, %all damage. But of the Dranghhoul, of Voidfire, even of the Arcane Blaze can do in a pinch.

I wonder if I could do with better affixes on my gear frankly, but the ones on the off-hand are reasonably flexible. Getting proper affixes helps in SR though. For Crucible I doubt they’d matter too much. I should do a crucible run tonight and post it.

As for Rhowan’s crown, I went for the full fire damage and fire resist + a little more OA from the green node to push out damage. If you complete Rhowan’s crown you’ll lose a bit of damage but you’ll more comfortably get your resists even higher AND get some chaos resist mixed in. I think it’s probably a good angle to go for the budget build/non high rolls. Then again, since the burn dmg helps the meteor and other procs you have, maybe it’s better? shrug

Another thing I am considering is giving up 6% cast speed and 15% damage to undead from that last node I took in revenant just to get more stun resist from throne. Iron maiden really fucking hurts now with her stuns! I don’t want to give up the undead racial mainly, since the 6% cast speed doesn’t matter with high rolls. I’m also considering this change in skill points away from devastation to round out my other stats better and focus heavily on AAR benefiting stuff: https://www.grimtools.com/calc/aZqOMzM2

I mean the budget version could just be any shard whatsoever really.

I am gonna testplay my budget version at some point, last time I checked it had 130k sheet dps at least

Again it is Norzan’s build. I just made the small tweaks for the SR version and am in the process of tinkering. SR version can obviously fuck crucible but im sure even stronger setup for crucible exists. Im not interested in cruc though so I do not plan on listing a cruci version unless someone else posts it in this thread.

@Autentist i might post one later. I know you are jokint but the build shows how sloppy you can do SR 65-66 even when build has room for more polish. Can clearly do 75. If just a bit less casually on boss floors.

Is Enchanted Flint an option as component in weapon and will it improve AAR damage?
Or is it better to go with 2 Seals of Resonance?

Trust your instincts. Depends on what you’re comfortable with. Enchanted Flint is more damage. Seals are more safety. I’m going to try the devotion change you mentioned with the second SR setup later today. See if I like ignoring devastation

It would be nice to add Phoenix in the offensive set-up, though at what price same can be done is a tough question.

https://www.grimtools.com/calc/62aEarB2 - this is what i come up with. Sailor Guide had to go, but we have Lantern + Phoenix now.
What do you think?

Nice to see build from you!

Interesting, I was about to post budget fire AAR. Now I have to focus on aether version.

I am Jedi Knight in my off days, so don’t you dare crossing your beams with me.

Don’t like the tone, Scottie beam me out of here!

I am Jedi Knight in my off days, so don’t you dare crossing your beams with me.