Intro
In the Druid department right now are only trozans builds which are really good btw. I just wanted to repurpose my druid to something different. I loved playing this build, maybe im getting better at kiting but its just easy gameplay for me. I am not very experienced in making builds but its fun to do and its good enough to do crucible so yeah definitely viable. 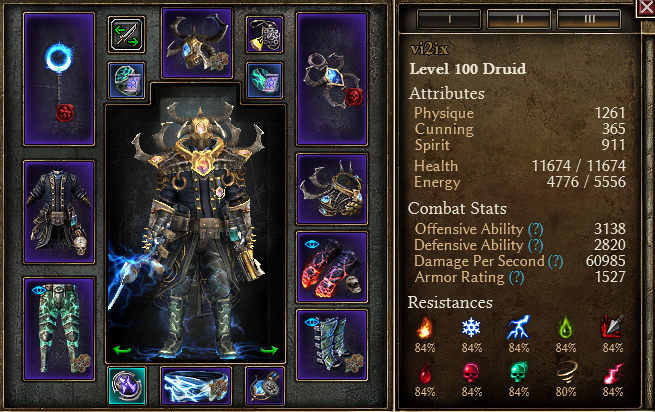 The items
I chose the entire cyclone set and the cindertouch gloves for the bonuses to wind devil. I took fateweavers chest for phys res and resistances. Wyrmscale for boots, stun res mainly. You could also get the boots of the grey magi, they are crafted. For a weapon i took rune of elgoloth. Now i use trozan for the extra wind devil. The rings are aetherstorm rings for the oa boost mainly. As an amu i took something a bit different, a azrakaa sands. Its basically one save from death some cooldown reduction max res increase, slow res +4 to nullification. I thought this was a nice item. As a belt i have the storm shepherd, but there are other belts you can use, i just wanted the +1 to shaman. Relic is eye of the storm for the same reason.

Devotions
Chariot of the dead for the proc and oa, widow for RR, eel and solemn watcher for da. Ultos for rr and the proc is just great for lightning builds. Rowhans crown for point rr. quill for points and a little da. Ghoul some lifesteal. Dryad for additional healing. jackal for some overal speed and points. Empty throne for some cc res and res.

Skills
Wind devils do the most I have noticed, the red wind devils from the gloves and off hand are really just peanuts compared to the wind devils. Storm totem is nice because it hits 8 targets and applies a dot which stacks with other sources. Mirror and nullification are great defensive tools. Nullification can also be used to dispel. Also dispel effects on yourself if i’m not mistaken but mainly useful to pull down enemy shields. I use wendigo totem as well for some extra lifesteal. Aether corruption is a handy skill for aether and lightning builds all together. Chain lightning has a dot again to stack and weapon damage for lifesteal.

Gameplay
It is very straight forward and this build isn’t very original in any way so maybe you are familiar already to this style, but what you do is you keep your wind devils at 5 and get a totem down when you can also aether corruption you have to cast a lot. When there is a group you can take you just stand and cast chain lightning on em, however you have to kite when there are multiple nemesis. You have mirror at 15.9 second cooldown and nullification at 8.5 second cooldown. Mages usually have a shield so dispel it with nullification. Also elemental units you can reduced their damage with nullification. Don’t waste your mirror. Try not to waste your amulet proc either, it has a 100 second cooldown.

Performance
It is very easy to play this character. You just run around and everything dies, that is my experience anyway. But you have to time mirror right and nullification. You can easily get a better crucible time, making better use of nullification, displacement and mirror. I did some SR and its ok now i have my slow res at 80% sometimes traps can be a bitch. But yeah just kite well and you are fine, but its just much better in a group. Ill post some SR as soon as possible

Beginner advice
The first 20 levels use devouring swarm. My advice is to use primal strike to further level your character. But wind devils raging tempest is also handy to pick up early. I think going for a wind devil build early on isn’t that effective as using primal strike. Very basic advice i know but most is about preference really.

Thanks to
Nery and sir_spanksalot for suggestions

I can’t really explain it, but this build is about the most Druidic-feeling Druid build ever.