When all those elitist wizards were practicing their magic skills, my boy Bobby “The Broken Wand” McStriker was punching his bag in the corner waiting for DW masters to reign supreme once again. These times have not come just yet but Bobby is already not a pushover. Even the grim dwellers of Knockturn Alley crawl back into their holes when Bobby comes looking for healing potions.

I thought it would be pretty funny to make a pure melee out of the class called Sorcerer. At first it had Arcblade but eventually i had to give in and make a DW because FS works much better with DW if you have equally strong weapon option.

I’ve been sitting on this build way too long. People are posting Sorcerers daily so i thought i’m obligated to add my ugly duckling to the family. 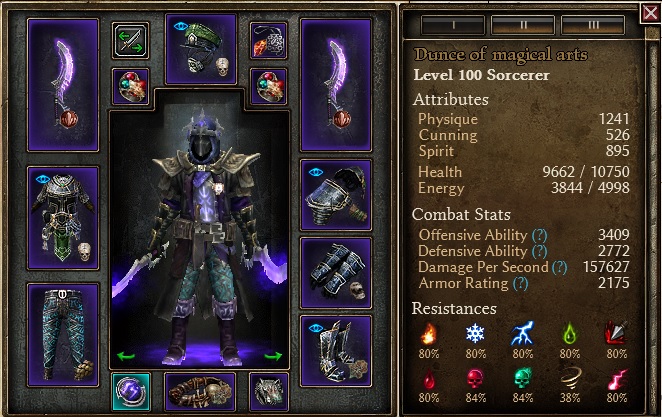 (FS dps with all permabuffs)

We go for maximum single target dps: kill things first before they stack debuffs. And it works. It actually boggled my mind: when i switched from the more tanky version with pretty accessible Obelisk of Menhir i got better consistency. This is life of melee right now, i guess. No armor and DA will save you, only dps will.

For that reason we need to convert all the chaos, fire and phys dmg into aether to complete our FS dps output.

Instead of sheer stats we rely on multiple circuit breakers with low cd and aether “immunity” to feel comfortable at 169.

I’d guess this is not the first time someone puts together Krieg set and Mindwarps. Amazing swords for phys -> aether conversion together with beefy flat from the complete set. But i hope i had some interesting findings to make the build at least somewhat unique.

The gear is constrained by Krieg set, Mindwarps and the items required to convert all the flat. I’ve tested with one Edge of Sanity, but it’s worse, -10% aether RR doesn’t save it. There is a possibility to go Clairvoyant chest+shoulders and free up one ring slot for bonus -10% RR. But on paper it looks a bit worse, offensively and defensively.

Pants are chosen for a crafting slot (stun), and other stats are all handy. Funnily enough we don’t care for the disrupt resist from it all that much. After all, we are a proud Sorcerer with no magic powers.

Components choice: we need dual skull to reliably kill the aether-resistant Reaper (+51% racial) before it summons the dudes. We also go for dual Seal of the Void. Surprisingly they perform similar to Wraithstone + Seal of Corruption and even a bit better when you group up bosses. SotV WPS with everything converted is nuts.

Devotion path can look weird but it’s the only one i had consistent results with. Phoenix absorb is up most of the time when you need it. The only downside of it - we need a new skill to proc it. Thermite Mines can be bound to Phoenix Fire but they don’t proc it (looks like a bug).

You need to focus the scariest targets and let the relic and FS do the AoE work. Casting speed is capped so you need to get used to fast tapping the mines and Flashbang when you reposition.

In Crucible your biggest enemy is Korvaak. If he is carried over to 170 you can’t be sure you’ll survive facetanking 170. Unless you kill him last, then it’s not too bad. Kaisan is always annoying with his celestial-level res. Grava and Reaper are countered by huge racial, but don’t forget to kill them first. Alex is also pretty resilient even though we have +33% dmg against him.

In terms of defense you have to rely on your procs charged by Time Dilation and -8% CDR:

In SR don’t feel bad about dying, you’ll be oneshotted a lot in deeper shards. But it doesn’t matter cause you’ll complete it within the timer anyway. The build can usually facetank two bosses but your goal is to kill them 1 by 1. Max the blast shield and you will have efectively 12 sec of immortality (BS+Ghoul+Mirror). It’s enough to kill one weaker boss before dying (i’ve tested it, completed 75 with all bosses rushing at the same time, although it was tedious and i lost the timer).

If you feel uncomfortable with such low DA, move points from Flame Touched to Temper, their dmg bonus is the same.

I think, average time of a good pilot with good PC wont be less than 6.30 despite huge single target dmg and decent AoE for DW. Reason for that is simple - confusion, cancerous and bugged mechanic. Just to give an idea: if you remove Flashbang completely (-260 effective OA, -fumble, -impaired aim and -proc) the clearing speed is about the same. Your main AoE, from the relic, works in swirls, and confused enemies manage to escape. 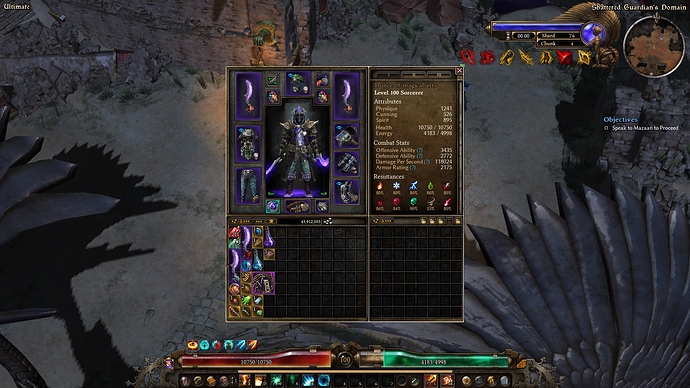 The build is a blast to play. If you don’t go for Phoenix Fire or bind it to WPS, you’ll have only 3 active secondary skills with capped casting speed so they don’t get in the way of the slaughter.

DW melee?
Check.
Not making use of any of the puny caster shit in Arcanist?
Check.
Using one of the best weapons in the game?
Check.

My kind of build, nice!

Haven’t played this concept in a while; not since Thermite Mines got Aether RR. I imagine it’s much stronger than the DW Fire Sorcerers I used to toy around with. I’ll probably give this a go whenever 1.1.5.0 is out, thanks for the grimtools!

+12% to beasts is the important part of Direwolf Crest. Toovaluable to give up. And it helps to pump aether res to 90%+

That’s a respectable result for a meme concept, good job. I still prefer classic Aether devotion map with spear tho.

I feel like you can get away with spear for a non-caster build, because you got no CDR to benifit the spear proc anyway.

The path to spear gives just a little more dmg but you lose DA and the absorb proc. Doesn’t really seem to be worth it. IMO the spear is underpowered now even for lightning.

top notch job. i remember tryinf this concept in aom, but the results were shite because no RR

Have you tried dreadscorcher btw?

Not too shabby. But I see there you got -20 energy regen.

Which is really irrelevant here because of Viper, Revenant and Conversion. Enough Energy all the time.

Not too shabby. But I see there you got -20 energy regen.

Grimtools doesn’t correctly calculate energy regen. If you check the videos, you’ll see his bar doesn’t auto-decrease on its own.

Have you tried dreadscorcher btw?

Actually i did not, i didn’t even know this weapon exists

I’m not so much into ranged

It looks really good on paper, i have to say. RR problem with it should be fixed by the ring+seal.

Iskandra, Conversion and Arcane Will make your energy infinite. I don’t think my energy bar ever dropped even 15%.

Did few test, died on few occasions, you need good timings against tough opponents. Most of my times were similar to yours, here’s the fastest one though, 6:31! run, with slight tweaks.

This build honestly doesn’t get the attention it deserves. Very well put together DW sorc

Thanks! Yeah, you can’t avoid occasional deaths because the defense consists of procs and if you happen to catch several big crits during all the cooldowns there is nothing you can do.

Ohhhh, this build looks like fun! I’ll give it a try.

Glad you liked it! I’m slowly updating the builds for 1.1.5.1 This one hasn’t changed much though. It got a slight buff in consistency from Explosive Strike and a speed buff to the aura iirc.

Bump. Should have known someone already crossed this bridge. Wanted aether melee dual wield but not to level another character, so my Sorc was repurposed. Ended up very close to this layout after dropping the full elemental -> aether conversion and just doing fire (and chaos). Will go back and try the full elemental conversion to use static strike as well at some point.

Low key one of my favorite perks is the max AS + CS, lose basically no melee cycles to drop those mines and BWC

Time Dilation is important to recharge safe abilities. Without them the build is unstable.

As far as i can tell Warpfire proc only works on one enemy. With 3 sec cd it’s not very useful unless you are fighting single enemy.
Double Mindwarps have much higher flat than that. Default WD value on the second tab of grimtools doesn’t include their permanent phys -> aether conversion.

Glad you are enjoying this concept yourself! I’ll update the build when 1.1.6.0 hits.

I can’t make this build work, it dies so easily to everything especially when hit by CC. Haven’t managed to kill Morgoneth yet