Small foreword: never played a 3-elemental build and a tactician class so decided to mix things up and make this build. Actually, it’s pretty obvious and similar to @mad_lee’s one but I’ve changed items a bit and chosen slightly different devotion route. 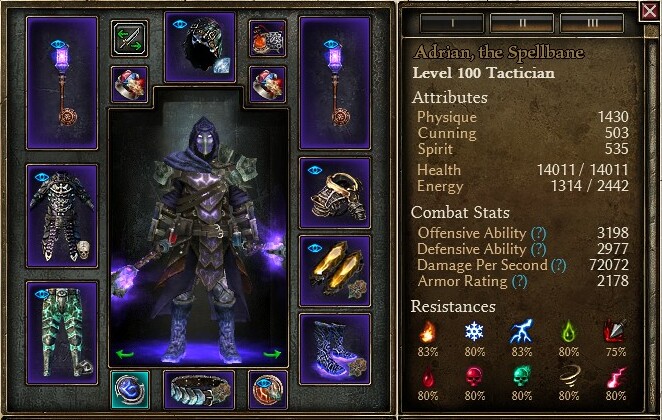 Build is tanky but lacks RR, so isn’t very fast in Crucible. The best run was made under 7 mins, though more average are about 7:30. In SR farms 65-66 levels but probably can go up to 70 (hadn’t tried it, actually).
Among Nemesis the most annoying is Cuba, also Reaper can hit hard. Grava is not a big problem on his own, Kaisan too.

Special credits go to @Nery for making the Crucible video and giving some advice, @mad_lee as the first one who made such setup and to all Safarel Discord community.

All my builds are available here: Afanasenkov26’s Build collection

I like DW melee builds and had lucky run. So nice to see house of Malakor standing proud! Later with post my take on Purifier.

But this is very similiar to mine ))

And this is cease and arrest!

but yours seems stronger somehow, so nice build!

Ah, yet another elemental build with these weapons - nice. It reminds me about my 2-elemental battle mage build using the same weapons as your build.