Reinvented the build a little bit and made a good sub 5mins 151-170 Crucible run before the patch hits. When 1.1.6.0 is out i’ll add a shards video, round up this small guide and submit it to the Compendium cause it finally deserves it.

It’s time for another 2-hander to destroy Crucible… and to die a lot but who is counting? 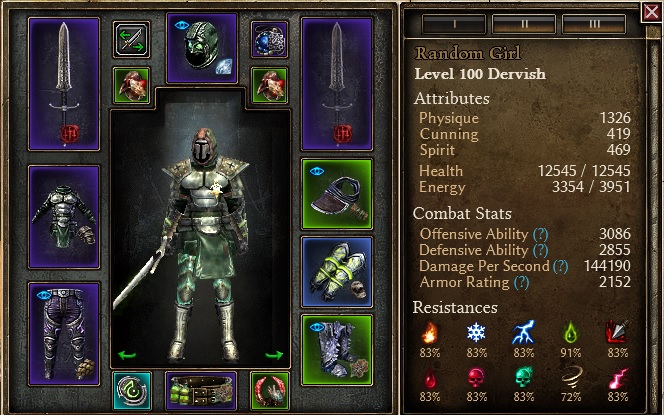 My record with this guy, or rather girl, is 6.55 (3+1), i’m sure it can be tons better with a right rig and not a potato piloting the char. OBS destroys my remaining fps so i was only able to complete 150-170 on the 4th attempt on tape (and i misplay a lot). This build needs a good PC so you wont miss timings when to disengage.

You have two big nukes on a small cooldown (RoS with 2 sec and ABB with 0.9 sec), they benefit strongly from the high weapon dmg coming from a 2-hander. Combined with strong burst procs this results in a very high burst dmg, you will annihilate a common pack in one cycle, hero pack in two cycles.

The weapon is core and the Venomblade bits seem like BiS. You also need 3 pieces of jewelry - two MI rings and MI medal (medal is mandatory for RoS). Rare rolls arent needed, you just need to cover your res and DA. I farmed for about 3 hours and picked from whatever i got. ABB conduit is preferable but i don’t think it’s mandatory. The main purpose of ABB itself is high dmg against tight nem/boss packs.

Balance your stats with MI shoulder and crafted boots. Again, nothing crazy, you can see there is no doublegreen item (picked whatever i had for shoulder and burned through 3-4 mln bits for a good selection of boots). Optionally, you can go with Titan Pauldrons (craft for slow, as with the rest of the gear) + Kuba pants. It will make the build more sturdy but you will drop some slow res and a little bit of dps.

Weird rune is used for some dmg mitigation because the build is squishy no matter the gear. It takes time to get used to it but once you do you can use it for movement comfortably.

Shadow strike into the pack, hit ABB, hit RoS, fly away to the next one, this one is already dead (because of huge dots from 100% abomination trigger and innate huge weapon dmg dots). SS is on 1.6 sec cooldown, rune is 3 sec cooldown so you are very mobile. The main guy who can slow you down is Alex, huge res.

All in all, first rule is to be mobile. Dots are doing a big part and your movement skills allow you to avoid bursts from boss packs when Ascension is down (optionally you can take Blade Barrier to reduce your 6.5 secs of vulnerability down to 3.5)

Compared to full Venomblade, this variation has higher burst dmg due to high WD and is more comfortable with the skillpoints. But it certantly is more squishy.

Not gonna lie, this build has far from 100% success rate in 150-170. But it feels like low phys res, armor and DA have nothing to do with it (you can tank the Queen under her buff, for instance). If you die it’s mostly to magic dmg bursts from 169-170 after you cought a couple of different RR debuffs. And against those… honestly i don’t play shield chars so i don’t have anything to reliably overcome 169-170 bursts.

I hope you like the build and maybe some of you will try it. I’m certain it can beat 6 mins in the right hands.

“I hope you will like the build” yes we do. Or at least I do. I generally enjoy acid melee builds. But as you say it’s a squishy guy, I mean girl. I usually avoid giving tips, cause might be annoying for the author, but am certain Iceskorn gloves are better. Crit damage to ABB, crit, OA, speed and helm will turn flat frostburn damage in pure poison.

Advices are always welcome! I’m not a vet after all, i may overlook a lot of things.

I was deciding between several pieces of gloves but decided to go with these because of +poison/acid. Seemed like more reliable option than +crit to ABB. But maybe you are right.

Tested and true on many a dervish. Shitload of DoTs and crit dmg and MORE attack speed and oa and THEY ARE CRAFTABLE!

Thanks for feedback! Will try this pair for sure since there are two of you and only one of me

. This variation was less thought through because i made some drastic changes not long ago (squeezed in the Revenant and dropped Justicar shoulder+gloves because their survivability in the end seemed to be invalidated by the dps loss).

Nice remake of my oldschool WH!

no remakes here, sir, everything is homebrewed, through sweat and blood

did you do smth similar? no wonder people come up with the same good builds. melee, especially 2H, is pretty bottlenecked in terms of viable drafts for Crucible.

Added video of 150-170 completion. I could barely see whats happening so don’t judge me too much.
Also how do you insert a video into the post properly?

Added video of 150-170 completion. I could barely see whats happening so don’t judge me too much.

Welcome to the club!

Thanks!
I’ll have to revisit a lot of stuff after i finally shelve this dying laptop

Thanks!
I’ll have to revisit a lot of stuff after i finally shelve this dying laptop

Of course, that’s exactly you should do!

What do you know, half a year has passed and i finally bought a new latop.

I couldn’t leave my secondborn child without some stormbeacon doping before it’s gone for good from the shelves.

The build has changed a lot, of course, but all items are still legit (includes farmable greens).