I’ve already made Fire TSS and Cold TSS so naturally I had to complete the trifecta. And of course it ended up being the strongest of them all because lightning damage is lightning damage.

Credit to @Adam_Bomb for originally making this build.

There’s two devotion setups that both work quite well. They have pretty similar performance, but I had better results with my more experimental devotion map. Tempest is permanent and Chariot is nearly permanent so it works quite well.

Affixes on the realistic version aren’t super important but try to get cast speed on the off hand and whatever relevant stats you can get.

Other than that it’s the same spiel as my other TSS builds, massive CDR + eternity + 12/12 mirror + ghoul gives you some pretty huge uptime of insane survivability, just try not to overlap them.

Feel free to put more points into physique to improve the survivability, I just like to live dangerously 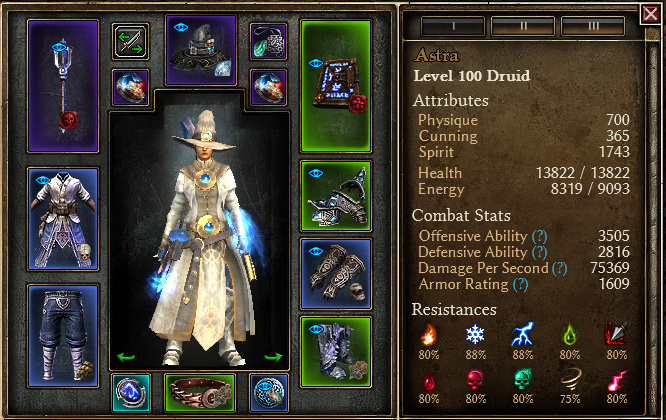 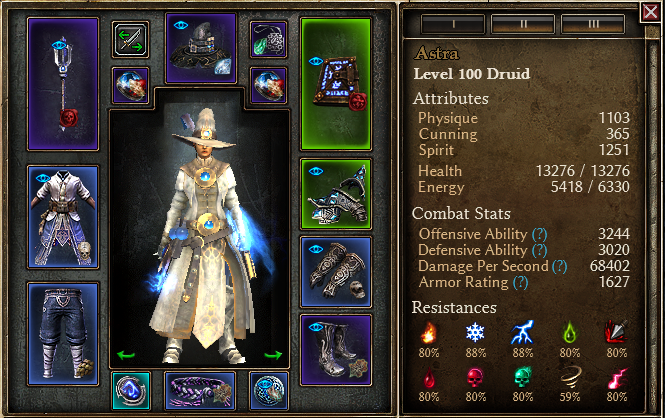 4:29 is my best time with my average being a bit under 5 minutes. Pretty damn fast for TSS I think.

I didn’t do too many runs with the realistic version but it’s still very fast. I’d say it’s 15-20 seconds slower on average.

No real build post for this one because it’s been done before and my version isn’t much different. This is just my take on Allagast BiS. It’s slightly slower than pure lightning Druid but it’s more durable due to being a Mage Hunter.

So maybe TSS is actually OP. I have no idea how to nerf it though, as there aren’t any unifying pieces of gear on my builds (Trozan’s Hat is on all of them except Fire Iskandra) so maybe the problem is the skill itself. One idea I have is to take power from Trozan Hat and put it into the set bonuses, but other than that I have no idea. Or just leave it like it is because I love this skill.

Honestly it’s the same calling card across numerous skills which seem “OP” whether it’s TSS, AAR, or PB. (There are more too, but these are the most obvious) They all have these things in common; huge amounts of flat damage cooked into the skill nodes and huge built in crit damage bonuses. These things combined with absolute maxed amounts of percentage damage increases via improved augment/gearing options + spirit or cunning dumps and near perfect conversions are leading to run away damage when combined with crucible total damage/oa buffs.

So that means every build needs a buff. Come on, I need new pair of shoes or many

Sounds like you need to visit your nearest Spite dealer

I have been calling for #BuffPets since 2019…

gratz on another cool build

700 Physique is the lowest I could go

Ever think of full converted Tsunamis for Jackal and Eel (in the experimental)? Totems, Devils or even Chain Lightnings should machinegun them with that 50% cdr.

I thought about it but the movement and casting speed is needed. I think having Tempest on Amatok’s Breath will sacrifice uptime consistency too.

That said, with paying attention to it properly it might end up being stronger, I just didn’t want to have to pay attention to that.

So maybe TSS is actually OP.

The stats of the skill itself don’t look OP. It’s not the skill but the amount of mods and +skills for it sprayed across the items which synergize well. It’s so damn easy to hardcap two main skills in the line, and then there is natural CDR just around the corner.

Same thing goes for lightning damage. You say it’s strong. But did you try to make a pure melee lightning DW? There is no items for it. Stormheart is the strongest by far - and it’s still crap if you don’t supplement the build with spells.

Lots of spells in the game have ridiculous dmg numbers in the ultimate ranks. You just can’t reach them - or you can but you pay too much.

So maybe TSS is actually OP.

The stats of the skill itself don’t look OP. It’s not the skill but the amount of mods and +skills for it sprayed across the items which synergize well.

Speaking about timers, the thing is not only synergy but also pilot’s skill that drives the build to the edge and makes it showing such results (still I may be wrong)

It’s true that there is a lot of itemisation that supports it, but that’s part of the reason why it will be hard to nerf (if indeed it deserves one). There are a ton of options available for TSS and I don’t think that’s going to change.

I think it’s the devotions that make lightning strong. I can’t deny that it has awful itemisation for melee, but the same could be said for vitality and that is also very strong right now on casters. It’s hard to beat Spear + Ultos though.

I always felt this was the case. The problem in the early AoM days was that many other devotions needed help or tweaks more desperately. It may be too late in the lifecycle for these two to be adjusted, though.

But also the new rings are pretty strong, in general. And that is not unique to lightning.

If anything it’s Ultos, with its low requirements and OP proc. The Spear itself is weak. For whooping 20 blue + 6 points you get 140-160 OA, 180% dmg, small res, staggering zero dots and a crappy proc. It’s nowhere near of what Torch and Amatok give.

I disagree. Lack of %dot damage is indeed Spear’s weakness but everything else is top notch. Crit damage, valuable Aether res, valuable max Lightning res, and 60% weapon damage proc that works like a machine gun on casters and leeches like mad. And it’s also passive, so no headache with assigning it to an attacking skill and procing it.

Stormcaller beacon is op, for starters. And cheap
Even more so on an AoE skill build with aoe procs

I guess for casters its not bad but halfbad because they need that WD and it procs more often.
For melee the proc is worthless. And the nodes are simply inferior to fire and cold constellation counterparts. For higher price. It’s all in Ultos being basically on the way.

For melee the proc is worthless. And the nodes are simply inferior to fire and cold constellation counterparts. For higher price. It’s all in Ultos being basically on the way.

Yeah, but how many top-tier melee Lightning specs are there beside Ultos? I think you are underestimating Spear. Part of its value comes from passive proc with low cd and high chance of proccing (which is one of the reasons why Lightning builds are so streamlined and thus fast). Another part of the value comes from the very strong devotions that lie on the way to Spear and the ability to easily combine it with Ultos and on some (aether) builds with DG and Aeon.

One of the answers would be don’t balance the game so much based on the best runs made by the best pilots piloting extremely min-maxed specs (that are skewed towards offense) that use several double rare m.i.'s.

I think you are underestimating Spear

It’s hardly possible, it’s all on the table. The node values are straightforward and they are inferior to Amatok and Torch. The proc is also representative, it’s basically a single target hit and you can see the numbers popping off. Compared to the dps output of a melee char (and i reckon a caster because casters are faster) it’s literally nothing. Again, i don’t play casters so i can’t measure it’s defensive value for a caster, i’ll take your word on that.

I agree that constellations on the way are strong. And Ultos, another lightning tier3, only needs 10 greens, and low greens were heavily buffed recently. All these things are in favor of the Spear. But it doesn’t make the constellation good itself. And when you have decent WD value on an AA build - even Korvaak gives you better results (tested on this build https://www.grimtools.com/calc/a2dnYDJZ). Which doesnt make sense because Korvaak is rightfully considered to be mediocre and it’s a generic constellation.