Credits to prior physical AAR builds Uncle Ray Ray and Physical AAR Templar that inspired me to make one. 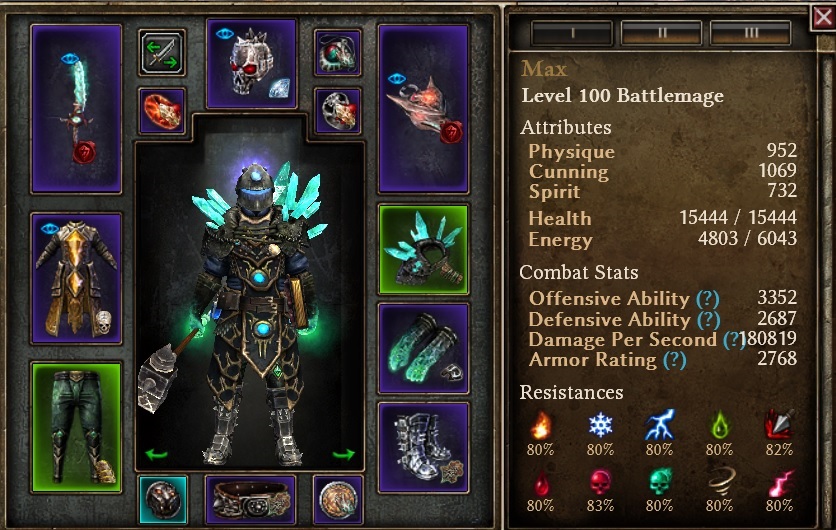 Video of build performance in crucible

Grimtools of build in the video

Cast speed is maximum and build does not run out of energy in combat.

There are few buttons to press so the gameplay is simple: simply blitz to a target, cast war cry and beam away.

The damage though is not amazing and I tried to compensate for that by stacking OA and crit damage and putting points in cunning. OA is almost 3800 when every single buff is active.

However the build is decently tanky and with the amulet, sustain is pretty good. I had tried using the arcanist conduit but damage and sustain were worse.

I settled on warbon visor because of the cooldown reduction mod on war cry. Calla or ravager’s helm possibly increase overall damage but then war cry would have an awful long cooldown.

Green shoulder, either Valdaran’s shoulderguard or Loghorrean’s Corruption is needed to hard cap AAR, specific affixes are not required for build to work.

Green pants are used to boost disintegration and again affixes are flexible. I have a double rare in my build because i just happen to have them but they are not BiS affixes.

I managed to record a 6:40 crucible 150-170 run after failing 5 times in a row on wave 169. I am a terrible pilot (which is clearly evident in the video) so in the hands of the a good player it should be faster. I have done a few other successful runs and it is generally in the range of 7- 7:30, so quite a tad slower than the top builds on the forum.

I would appreciate any feedback in improving this build. Thank you for reading.

How nice. I also like Phys AAR Battlemage.
I beat SR85 with this setting. I haven’t tried CR, but I think it’s stable.

How’s the performance of this medal vs Conduit with weapon damage?

Thanks. Your build looks interesting but it seems to have some unwanted conversions. May I know what is your AAR dps?

Thanks @Nery, I didn’t try any crucible runs with that AAR conduit. But when I tried using it in campaign with the same devotion and build, the sustain felt worse and sheet dps was lower.

Sweet, that’s a nice build you got there and congrats for clearing 170 (which I still can’t to this day

I agree that it’s better to use essence of grim dawn than conduit for sustain, 4% for AAR damage to health sounds a lot more than 16% weapon damage to be lifesteal in AAR as the weapon damage itself is small, below 10k in damage, and not to mention it gonna need tons of adcth to make it impactful with that small damage.

I only cleared it after many tries… and that’s with 4 blessings and a fully upgraded vanguard banner.

Thanks you for your kind words and for posting your build, which inspired me in the first place.

Yea you are exactly right… the tiny WD% to AAR and low weapon damage makes the conduit way worse than essence of grim dawn, for this build at least.

Yea you are exactly right… the tiny WD% to AAR and low weapon damage makes the conduit way worse than essence of grim dawn, for this build at least.

Shouldn’t be too much of a problem since @xOMOCHIx cleared SR 85 using the Conduit and Mythical Chains of Anguish. A great feature of the Conduit is the 100% total resistances it grants, though.

Editing the SS was troublesome, so I took a video showing the specs.

I chose Conduit for resistance as RxJunkie wrote, but I think the essence of grim dawn is better. In that case, the medal can be another thing.
Iron maiden struggled quite a bit, but had no other major problems. I think it was a pretty lucky run.

I think the belt has become difficult to evaluate. In particular, the decrease in ADCtH is bad because it further reduces the slight recovery from Conduit, but All + 1 and statistics are still attractive and I think it is useful up to a certain difficulty (about SR75). I think there is another better choice for Deep SR where more survivability is needed.

I think the belt has become difficult to evaluate. In particular, the decrease in ADCtH is bad because it further reduces the slight recovery from Conduit, but All + 1 and statistics are still attractive and I think it is useful up to a certain difficulty (about SR75). I think there is another better choice for Deep SR where more survivability is needed.

I think in this build the belt fits well since you have the Spectral Guard ability from the Inashkor’s Head to offset the debuff from Chains of Anguish. They’re both about the same CD and duration, so I would be interested to see if Spectral Guard triggers almost all the time with the Anguish debuff since your ADCtH drops and you heal less, so you’re likely to go under 50% HP. Effective ADCtH normally would be what, 2% to AAR? So it might go up to 4% under the right circumstances, but more likely stays about 3%. That’s not bad at all when you look at the benefits of Chains of Anguish+Conduit vs Essence of Grim Dawn+other belt…

I think you are correct though, that going above SR75 might present some issues, but for everything else it should be just fine.

Thanks for posting the Physical AAR Battlemage here @Barbaker - I might have to play around with one now!

I’ve tried a more defensive spec with this setup going blue-yellow on devotions. Essence of the grim dawn is definitely better for life leech than conduit, although its res leaves a lot to be desired.

First, I’d figure out a way to swap the Dawnshard Hauberk for the Warborn or Octavius chests, since they don’t have a fire -> lightning conversion. Second, an Ugdenbog Girdle with good rolls beats the Reforged Chains. You trade a little crit damage for great %armor and the wealth of resistances that good MI rolls can give.

Also, playing this build just makes me realize that Spellscourge should have just had physical AAR as its spam attack between devastations.

@xOMOCHIx, Thank you for the video! I like your gear choices and I will probably incorporate some of your ideas into my build. It looks a lot stronger than mine.

@RxJunkie, You are welcome. I can’t wait to see what you might bring to the table with your build.

agree with the suggestions. warborn chest gives bonuses to break morale and with the visor grants bonus armor but I had some difficulty with capping my chaos resist when I use it. The conversion on dawnshard did not really drop my dps though, and the proc I feel is quite useful