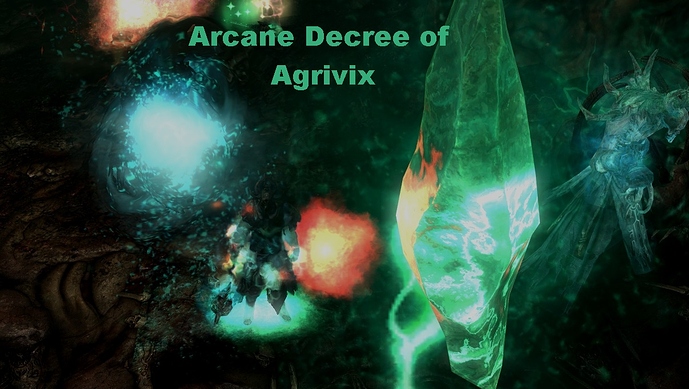 decree.jpg1206×681 221 KB
Introduction:
OLD
This will be even shorter than my last one. I rushed the polish phase, but I didn’t have time to do more than one crucible run tonight. (died on 170 by being dumb vs grava and kaisan) Clears are around 7-8min with my pc/piloting(past runs)… so better can be achieved. Maybe on wednesday or thursaday night I will find some time to play some more. If not I would be curious to see how a good crucible pilot fairs with it.

Agrivix set + lots of elemental to aether conversion gives us full aether elemental seekers, arcane currents, phoenix fire, vindictive flame, and arcane wisps. You must kite; this isn’t a face tank build. Thermite mines chunkiness is really felt in crucible on this one. DPS is very high once you have currents/wisps/seekers up.

I haven’t tired far into SR, but cleared a 65 without too much trouble (no grava)

I will expand on this post some day as this build quite fun.

https://www.grimtools.com/calc/eVLa7n4Z
On paper this guy looks squishy, but in game he is a leech tank right up there with some of best vitality builds. craft for x2 physique bonus and x2 slow resist

glad to see you posted this though im sad i didnt show post my apostate version 1st, now ill just look like a copy cat

looks good though, i see you made some nice changes since i last saw it!

Just noticed I didnt even have my harp bound to a skill for that video and the crucible run. Lol time for bed.

I love that one!

This is the build I was waiting for. Nice original use of just one Magelord ring but… later. Why no BwC, though? Reap Spirit is so crap even with Clairvoyant/Diviner.

Also, this conversion bugs me with this mixing up ele->aether with fire/lightning->aether.

You got 60% ele and 30% fire which gives you not 90% but merely 60%+(100%-60%)30%=72% fire. Violent Decay would boost it to 96% for example. Same with lightning. So a second Magelord would solve all your conversion needs. You got rr from both masteries (the newfound strength of DEFILAH) so maybe that Eternal Haunt isn’t such a must. Maybe. Just thinking aloud.

The helm gives another 25% ele to aether

You might reconsider about reap… It hits over 200k crits in crucible. As well had creating spirits which serve as distractions

Aw shit, for some reason I thought it was Wrath of the Ascendant not Decree. My apologies.

As for Reap Spirit, can’t argue with the distraction, so I’d keep it at 1p, but 200k on single target with, what, 1.9s/1.8s cooldown… Cousin spellbinder used to see more with two-three CT farts in glorious AoE. BwC gives much needed oa shred and proccing power. You still have two key devotions unbound in that gt, and BwC would fit in there very well. Also, you can get to 21 with Ulzuin Wrath, I see. Does it work good for sustain with full aether?

Yeah the sustian from ulzuin is noticable in groups for sure… I’ve debated taking a full smax on it by taking a demo belt, but idk. I feel like there is room for improvement here still.

Bwc isn’t really needed TBH, although you could drop ravenous Earth for it with the transmutor, but I preferred the total damage reduction as opposed to just physical.

The reap Spirit does help with nuking certain bosses down without having to worry about using pet attack button for focus.

TBH ulzuin belt probably is best in slot… I just didn’t get to test it yet. You could change a ring augment or two to get an aether % damage one since you would be getting more oa and da from the belt… This would allow 26/22 on vindictive flame. Making the cool down only .6second and a big damage jump

This time for a Defiler! Sigh,don’t know anything about the game.Seriously,nice damage.

By the way, wouldn’t it be better to use Ravager’s helm but full Magelord’s set?

Although it certainly is a viable alternative. Extra button to press for the rr too

Nice, I did a defiler back in AoM day that was the first or second. I glad the game give us more options on legendarys, after early AoM. I had to use at least 2 or 3 to work.

Very cool! Looks like a stronger version of the Defiler build I’m currently running - grimtools. Mine only converts fire to aether and thus my damage isn’t that great. I’ve only managed to beat crucible gladiator once with this despite many attempts. If Van Aldritch ever drops that scepter for me I’m giving your build a try for sure.

Finally got around to actually doing some crucible with this thing. I did end up going with a setup with BWC… the aoe flat rr really helps take down trash mobs quick when combined with ulzuins… 7 min run.
Im very curious to see what a good pilot on a good pc could do with this thing. I mean I almost committed suicide twice on 170 by stepping into a meteor lol

Great build, love seeing builds with arcane currents and elemental seekers, and the agrivix set proc on top of that.

What is the reason for chillspikes over stormfire (seal of destruction)?