Another asking for some attention class I’ve experimented with.

While my Retaliation Saboteur was more of a joke than an actual playable thing, this one can compete for the title of a pretty good build. To be honest I didn’t even think Battlemage is so unpopular combo, but here I am - trying to save another “forgotten” class with retaliation.

Overall I’d say this one ended up being quite generic for retaliation build - lots of toggle buffs, couple of mobility skills, devotion procs. 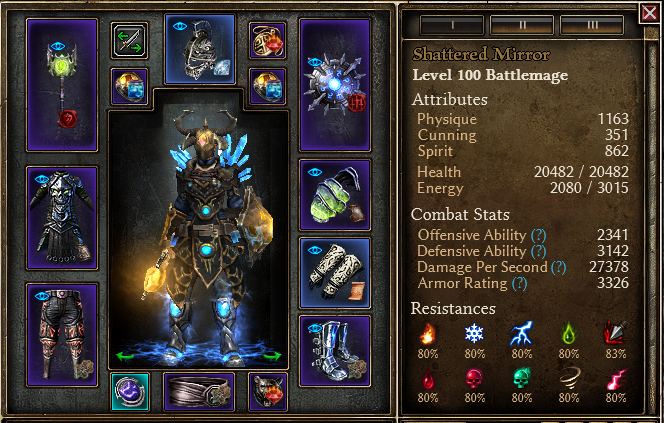 I haven’t tried to swap rings with [Judicator’s Seals], but that should be a viable option.
It’s simply more compelling to be a little gravity center with 2x[Ring of Sethris]

SR75 is somewhat consistent, I haven’t tried to go higher, but probably with good RNG it could clear SR80. Video with SR75 boss room is down below.

this is a cool build man, but i do have one question. Are all those points in Veterancy necessary for a particular reason, or is that just how you prefer it?

Thanks! And yeah - my preference. But tbh, I feel like I need to update attribute distribution, Maiven’s cuts deeply into energy and it seems the build needs more spirit, and that’s where Veterancy will shine.

How required is Sethris? 2 of that ring is INSANE RNG. Viable replacements?

As I mentioned in Notes section: [Judicator’s Seals] should be an OK replacement + they give some more survivability.

Another possible option I think could be (in perfect world) 2x [Unyielding Creeping Ring Of Scorched Ends].

But even the base Creeping Rings should be good enough. I’d personally go to Ancient Grove looking for those rings with better resistances and changing augments accordingly. In my experience you get tons of those rings over a regular playthrough + there’s a vendor for them.

Sorry, I didn’t think that’s a bad way of crafting builds. I my view the big idea behind build-making rotates around “using better items for better result”. And while Sethris rings have crazy RNG, I put them there just because they seem to be the best-in-slot option. I might be wrong though but I think even the worst ones would be great.

Also you can disregard everything I say. I don’t play post level 90 and I’d rather level up another character.
This build as well as saboteur were put together just to see what “bad” classes can do with endgame content

Youre damned if you do, damned if you dont, because while I do understand what that guys saying, I also understand that a large number of people on this forum use GDstash, whether they admit it or not is another thing entirely, but the main point is, most of the builds posted contain the specs for BiS gear. Which is more often than not, GDstash type shit. And yes it does get frustrating seeing that so often, HOWEVER if you DONT post the build with those specs, some OTHER person will criticize your build and overall game knowledge for NOT posting the build with the GDstash level BiS gear.

The best way to handle it is to do what you did and provide those substitute gear options if you cant obtain the BiS gear. That way, no one… well, mostly no one… will criticize it, and youll instead get the feedback thats productive.

@Biostasys tiny update, I’ve made another test run and technically you can use any rings you want

and the endless stream of legendary Russian theorycrafters continues! - all jokes aside, great build!