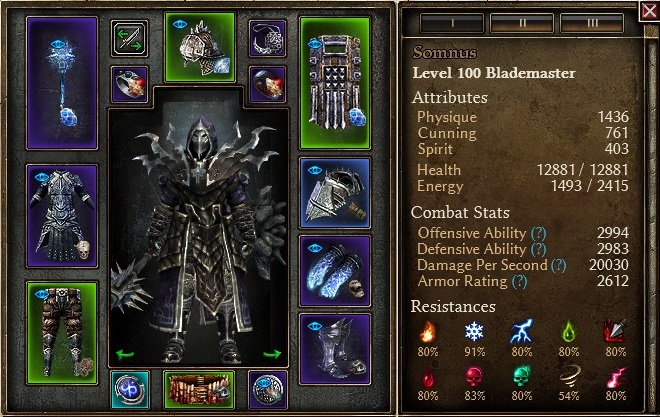 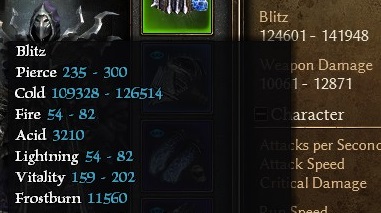 Stats and damage shown for both are with passives, Pneumatic Burst and Lethal Assault active.

My gear is crafted for Slow resistance.

In 1.1.5.0, Morgoneth released and a bunch of related items were added with him, many of which got random bonuses to Blitz and Blindside spread across them. As strange as it sounds, I was looking forward to seeing someone try Cold Blitz back then but I have yet to see it happen. Thus, I gave it a try myself and decided to post the result for community impressions and feedback.

With all that said, temper your expectations - it’s still S&B Blademaster.

Blitz (Whirlpool): One of our cooldown abilities for dealing damage.
Overguard: Increases our shield’s effectiveness and provides damage absorption for a time.
Amarasta’s Blade Burst (Elemental Storm): Provides some damage output when Blitz and Amatok are on cooldown and a damage and Offensive Ability buff through it’s modifier.
Ring of Steel (Blizzard): Provides Fumble in an area around us.
Pneumatic Burst: Provides Dodge/Deflect and Defensive Ability.
Blade Barrier: 3 seconds of invincibility. Use it to intentionally block a strong attack like Aleksander’s Meteor or as a safety net if you are about to die.
Amatok’s Breath (Rumor): One of our core damage abilities after Blitz and Blade Burst.

In total, this leaves us at -73% Cold resistance, 20% reduced and 32 reduced Elemental resistance. Not great but we gotta make do.

Night’s Chill can be slightly more/less depending on gear affixes like “of Shattering” or “of the Winter Storm”.

Split investment between Cunning and Physique to build up OA/DA. Feel free to change how much of either you want, I went with equal amounts pushing 2900+ in both.

Use Blade Burst, Ring of Steel, Blitz and Amatok’s Breath whenever they are off cooldown. Pneumatic Burst can be used off cooldown as well or can be kept and timed to heal off a glancing blow. Overguard if your health is dropping, Blade Barrier if your health drops too much or you can rely on Ghoulish Hunger.

Hey, man, it would be nice if you include at least some screenshots (in case you can’t record a video) with build’s performance. Or at least write couple of sentences of what build can do. I have looked thru the guide 5 times and I have no idea what this build can and can’t do.

Done. If you or any of the other Crucible players want to try it at 150-170 to test how it does, I’d be happy to send the character file over

I like it baka, When you have time send me file in discord buddy ill try her out

Nice idea, S&B builds are rare, Blitz even more. I think last build like this was updated early FG era and made back in AoM.

I’d be happy to send the character file over

You can zip the character and attach it to your post for anybody to try.

Interesting.
I am worried that the amount of RD is small, but it doesn’t seem that bad overall. Anyway, well done!

Dare I wonder how this functions with a SS focus, thinking back to the cold S&B BM of 1.0.0.9?

sry for hijacking your thread.

What do you think about the new alkamos scythe?

What do you think about the new alkamos scythe?

Very strong, lots of damage potential with Lethal Assault + Menhir’s Bulwark and while you could go Blitz or Ring of Steel with it, i think Cadence or Blade Arc are going to be far stronger. Only RR is somewhat problematic.

I don’t plan on posting a build for it but I’d be surprised if no one else does in the coming weeks/months.