INTRODUCTION
I was curious whether I can make a build that can facetank all three Ravagers based purely on leech as the sole defence mechanics. No shield, no kiting, no gaming skills - take everything on the face and still beat him.

The high damage version for SR and crucible:
GT for farming 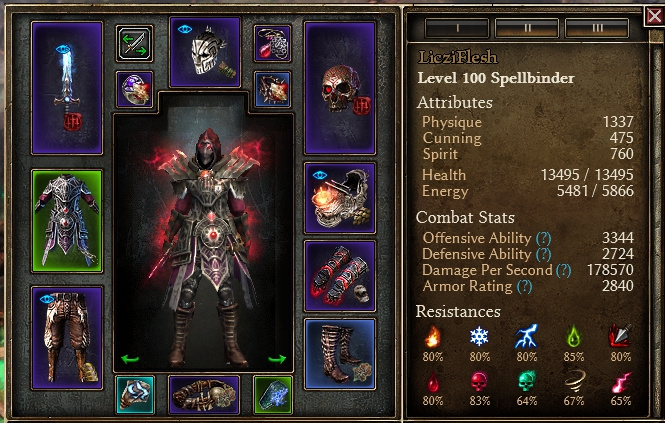 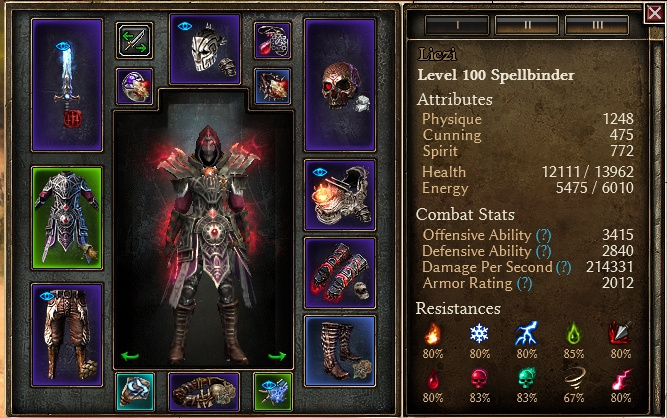 MECHANICS
Skill choice
First of all, as Ravager of Souls has nasty fumble and impaired aiming pools, I decided to make a caster. Next, I wanted consistent and high damage to leech from, so my choice narrowed to channelling skills. From these, I got to drain essence as it already has built-in life leech, which can be further boosted to 26% (more is possible, but with less damage). For the second class I went with Arcanist for OA and defensive skills as well as good support for channelling skills.

Other leech sources
The leech from drain essence only is not enough to keep the build alive when facing Ravager. I needed moar! I took all the life leech procs from devotions (which are also vitality based) and additionally siphon souls. On top of that, there are four skills with vitality damage from gear that also have life leech. So in total, the build has 10 sources of life leech! Seems a lot, but apparently fumble affects some of them, and Ravager of Souls is the most difficult of all three (the others were killed in the very first attempt).

Defence
While the resistances are easy to overcap with potions, the biggest treat is physical damage. Thus, the build has 32% physical resistance and I tried to stack as much armor as possible. The Ward of Gul’Amash also helps big time. On top of that, I use mark of torment and mirror of ereoctes. The latter is rarely needed and in the first half of the fight I never used it. However, it is good to have it when Ravager has a long hitting streak when enraged. Our 30% of cooldown reduction is also very helpful.

Offence
Rather straighforward. The damage is built by converting all aether to vitality and keeping casting speed around 200%. I also have put some points in cunning to have over 3300 OA.

SR PERFORMANCE
While in the SR boss room, the build could easily aggro the bosses, the Ravager version lacks the clear-speed in normal chunks. Thus, I made less tanky version, but with far greater damage. The change is in dropping some defensive bonuses and going to Dying God for more damage. I also changed the amulet to the one with +2 extra targets to drain essence. The result is very satisfying. The build is tanky enough for SR80+ and has a very good damage. If you are going to farm Elite or doing lower shards, feel free to swap bindings between Bat and Rattosh, so the RR is applied earlier. Monsters melt 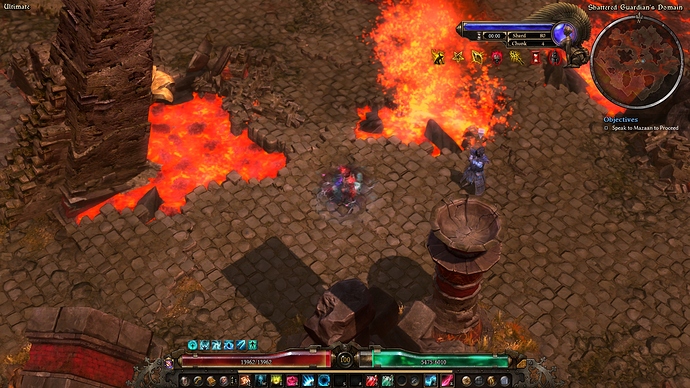 CRUCIBLE PERFORMANCE
Still to be tested. I do not like crucible that much, so I will be very happy for some testing. I will definitely post your results here.

THANKS
I would like to thank @Duchy for the inspiration with his AAR Spellbinder. Also many thanks to @banana_peel for pointing me to Dying God for general farming version.

CLOSING REMARKS
It was fun experiment and I definitely enjoyed the challenge. Feedback and suggestions are very welcome! 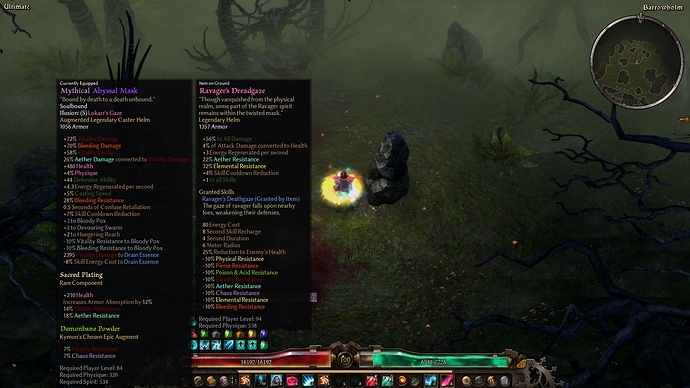 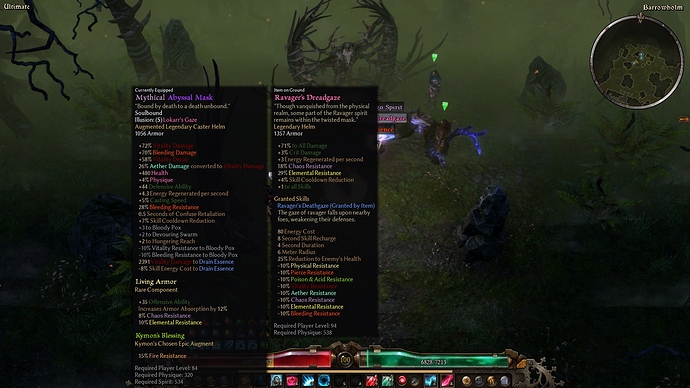 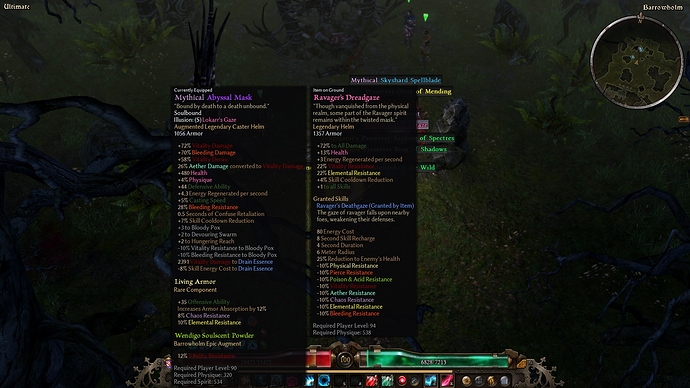 notice a Drain Essence build showing up on the forums again

Well there we go! It’s about time I start to see one of th-

The build is useless in all other scenarios (be warned)

@saucey That was also my reaction when I tried SR with this build. Sure it can go to SR80+, but the clear speed in regular chunks is more than disappointing. There is simply no comparison to AAR. There is a reason why there are only three builds with drain-essence tag…

Drain Essence is a strong skill capable of farming both SR in Crucible with at least 3 dmg types: cold, aether and vitality. But single RR vitality build with a spam skill is often a struggle. Try making Oppressor, maybe. Also take Abomination or Dying God. Your % dmg is not that high to pass on such a dmg bump.

Other than that, congrats on the achievement.

@banana_peel Many thanks for the suggestions. I will try to play with the procs and devotions. The build actually has already 120% RR, but 35% is “on hit” and for the rest have quite low trigger chance.

I have made a spellbinder that is very similar to Duchy’s one, but with different devotions. In-game stats, DPS, and everything are very similar to this DE build (~180k DPS, 128% RR, similar OA and DA), but the feeling is like night and day - the AAR spellbinder simply melts through the content while this one really struggles with regular chunks.

@banana_peel Thanks for pointing me to Dying God!
@saucey Not useless anymore - now you can farm!!!

is it worth maxing arcanist tree? i had similar character, but stopped at 32. (skill tree) level.

@LeftY_CRO Not really. I just needed the spirit for the off-hand, but you can still transfer some points from cunning or physique to spirit. I think this might be worth considering for the farming version as for the Ravager one you need to build more defensively and extra life is always a good idea. With additional points I would probably softcap Elemental Balance first, and for the remaining ones go to Siphon Souls. On regular mobs the DPS will increase by approximately 4%, if you softcap Elemental Balance (if I calculate things right). This might be worth doing for crucible in particular, if you want to squeeze a few extra seconds and defence does not matter much.

You can also do an aether version with Uroboruuk set, the difference doesn’t SEEM that big until you realize you can cap cast speed and also get quite a ton of crit damage. MI’s are not required though Ilgorr’s is a nice QOL buff. https://www.grimtools.com/calc/Q2zxYD9Z

@Tarazet Thanks for suggestion! Indeed aether version is possible, but I think it will be much more squishy due to lack of that many leech mechanics, lower armor, and way less phys resist. For crucible it might be faster though. However, for Ravager vitality version is a must IMHO.

Yes, for the superbosses your version is quite fantastic! I would have gone more pedestrian with Cabalist for the easy disrupt protection, but you make a great case for vitality Suckbinder for an important niche case. For Shattered Realm/Crucible I might prefer the aether version.

You might be right. I am quite new to the game, and I am not the top pilot, so my way of building is to prioritize defense over offense. I like the forgiving playstyle of such builds. For one-shots I can always go to PoE

Hey, credit to you, you absolutely made it work. Just giving another option in case someone doesn’t want to farm a lot of MI’s.

Can you try this and give me some feedback.
https://www.grimtools.com/calc/L2J3bY4V

Wouldnt gravechill be good in this?it directly buffs vitality damage by 25%,and turning aether in to cold doesnt seem to matter,unless im blind about something.

Either way thnx for the build,been looking for an updated drain essence