The reason behind this build is to make a leech tank using aether AAR. Because of resitance reduction and good survivability I have chosen the Necromancer as a second class. I have three versions of this build - one with no set and two using the Clairvoyant set (they differ in an amulet). All versions use almost identical devotions. I use two items with % ADCtH to AAR for 10 % ADCtH total (one version uses weapon damage conduit and general ADCtH). And I also use -% life leech resistance from two sources - Haunt relic and Rattosh devotion. This is what makes this build a leech tank. For example Ravager has 90 % life leech resistance. I have -16 % life leech RR that means Ravager will now only have 74 % resistance. Which means I have increased my ADCtH against him effectively by 2.6 multiplier. Other items are also taken for this build to be tanky but to not compromise DPS much. All three versions perform very similarily. I have never played with any build that does SR 65-66 with such an ease. Grava is the greatest joke ever. You can even facetank Ravager with this build. I am sure it could do all celestials but I don’t bother with them (Callagadra you will have to kite). It could also do very deep SR (very very deep).

All 3 builds use two green monster infrequent items - Chains of Ygraad and Pulsing Shard. You want bonuses for OA, DA and aether damage. All crafting bonuses are to stun resistance.

I will not write stats for all of the three builds this time as I usually do. They are in grimtools links.

All versions perform similarily. SR 65-66 is a joke. Grava is the greatest joke ever. I guess that this build can do extremely deep SR. Everything goes down fast and your life barely moves. I don’t push my characters higher but it can go a lot higher if you are a skilled player. I don’t play Crucible so I don’t have a time number for it.

images from SR 66 for all three builds

I think all are doable but I only killed Ravager (I like his helm). Others I don’t care about. You can facetank him for the first half of his life easily and for most of his second half as well but sometimes you have to disengage and wait for cooldowns to end. Be aware that facetanking him is not easy. You have to time everything correctly for couple of minutes. It took around 6 minutes to kill him with the no set version and around 8 minutes to kill him with the Clairvoayant versions. I don’t really know why the no set version is significantly faster in killing him. All versions disengage from battle similarily in his second phase. The no set version just shreds his life the fastest even though it has the least DPS but it is also less reliable. 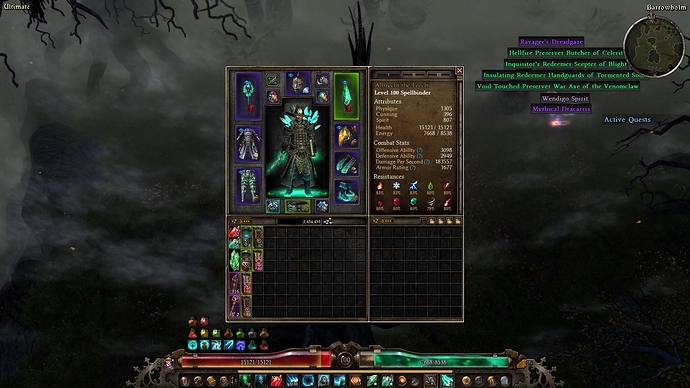 I wanna a lazer gal in HC

What version do you recommend for safe midSR and celestial farming?

I think that variation of Off gonna getting moar hard (for exact pre and suffix, but i feel they are not mandatorial)

There are several combinations of possible affixes. And you can alwys reshuffle a bit other things like augments etc.

I have also managed to create a tanky fire AAR build. I will post it in a few days.

Man, you ask this under almost every build here.

There are many options. You can use a 2H weapon and Bone Horvest. Another Is aether Callidor’s Tempest and Devastation. Another is Olexra’s Flash Freeze and Fireball from component (later Conflagration relic - my favourite).

If you want a laser most of the time then do OFF + Firebal and from level 35 Conflagration. Around level 75 or 94 depending on items you have you can switch to AAR.

Ot you can even play the whole time with aether AAR but you will have to manage energy requirements and that is harder in the early levels.

Try out what you like. You can change it throughout the gameplay anytime.

Here is a thread about levelling Spellbinder. Just search the forum.

Thank u for your reply. Firstly, i would like to clarify…i am a player who always try out different build and when i am interested in a build…i would ask the same question which i did…
Till date since the launch of the game (though u stopped 2 years or so) i had created and deleted almost 100 toons and only a recent cabalist kept me playing till end game…the rest of my higher toons are either 60 to 80s only…
Secondly, i always ask the same question because i like to level based on others player’s build and not going for beginner build till high level and changing to the build that i desire. Thus, my question had been repeating itself throughout…
Please do not be offended or annoyed…i just wish to enjoy my own style of playing…
Thank you!

Well after this number of builds you should be a levelling expert. But it is OK to ask

Apparently i am not…

What was Ravager kill time?

I wrote it in the text. 3-4 mins with pharma. I didn’t timed it precisely.

Never got that scepter from the port, but I have a few from crucible and SR drops without trying. The Alkamos rings, on the other hand… do not drop in crucible or SR.

Out of interest, while it’s obvious you’d keep Haunt/Corruption/Ill Omen up full-time on bosses - do you use all 3 for general trash packs? If not, just Haunt? Haunt + Corruption? Save Ill Omen for tough mobs? Just trying to understand how this plays in your experience as far as the piano-ness.

I use all of them. Haunt and Corruption proc devos very good and Ill Omen has damage reduction. You don’t need damage reduction from Ill omen on trash mobs. So you don’t have to use it there.

I have a lot of items in the second build so that’s what I’m going to be going for. It’s going to be my first time playing both arcanist and necromancer and I’m planning on using RE for levelling. I see AAR uses Fire (which is converted to aether) and lightning in the second skill part that is converted to vitality. Does this mean the skill will do a combination of aether and vitality?

Yes, with the Clairvoyant set it does both aether and vitality. RE should be OK for the levelling.

Does the 2 seals on the weapon stack? Like do you need to cast them both on bosses?

No, they don’t. They are there for damage bonus and OA. Use only one.