The idea to make this build came from @venegas in the discussion thread of my previous fire AAR + OFF build (Sorcerer). This Templar is a bit stronger than the Sorcerer version. It is again based on the Mageslayer set’s OFF + fire AAR + a lot of CDR (Aeon’s Hourglass, Aldanar’s Vanity and Eternity). It has more DPS but I had to change Star Pact for Reckless Power for damage and casting speed. There is therefore less CDR and because of no health regeneration I don’t use Behemoth. So there are some trade-offs. The itemization of this build is very similar to the Sorcerer.

Build needs two green monster infrequent items - Gargoyle Girdle and Alexander’s Legguards. Ideally you want affixes that give bonuses to OA, DA and fire damage. Crafting bonuses are to physique on both helm and dagger. You could make them for stun resistance instead but enemies are frozen most of the time so it is not that needed. 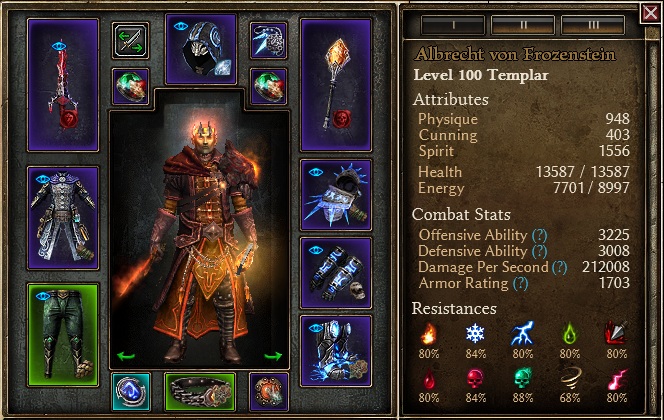 This build is similar in performance to my previous Sorcerer therefore the same applies. Build is capable of doing SR 65-66 and a skilled pilot can go higher with it. But be aware of a mutator that increases enemy’s CC resistances in SR (with that mutator fights with Mad Queen, Grava and Gargabol are like cat and mouse because you can’t freeze them - without that mutator you can freeze them and they are OK). You can’t tank everything everytime but if you reposition yourself carefully using Displacement and you know the bosses you can beat SR 65-66 relatively easily. It can even do SR 80 with good mutators (if you can freeze enemies) but it is tougher. It is squishy in SR 80. If you can’t freeze Grava and Reaper it would be impossible in SR 80.

In reality, MI are four. The two magi rings are a lot harder to farm than Aleks’ pants and Gargoyle girdle with decent affixes.

Yes but I mean by that the greens. Next patch it will be easier. 50 % more drop rate for the rings. I changed it in the post.

Even if it was doubled, the farming would be really hard. I dropped 7 magi rings only (2 Anubar, 1 Tawrot, 1 Khonsar and 3 Orissia) in about 160 Tomb of the Heretic runs since it was released, I don’t know if I was unlucky but it seems to be a pretty long farm at the moment.

Other than that, the name of your build takes me back to the good ol’times: 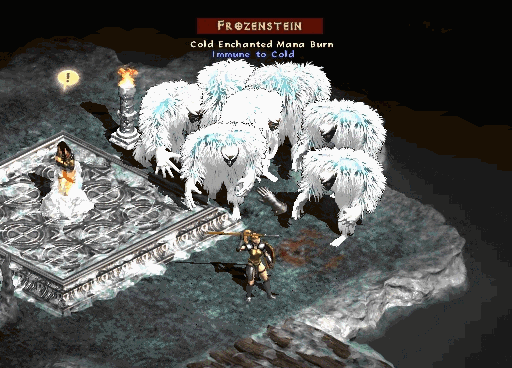 I forgot to make a feedback a while ago. This build is a lot of fun for me indeed, yeah I could get to SR 65-66 which is good, could be 75-76 and even 80 to 85, BUT you gotta move fast and it is really recommended without that ugly mutator that gives bosses more CC resistances. Other than that, campaign is fun, once you reach 94 it is the point where face melting comes to play.

Aetherlord’s Signet can be used as a placeholder or Blazeseer Signet.

I changed it significantly since the first version I posted to you in the thread.

Yes I noticed, I used the same things you linked but I always aim my characters for more HP, I might want to use this new link to see the difference. I am happy this is possible, some love to oathkeeper and arcanist

I don’t understand why there were not more of them before. Templar is a great class combo but forgotten…

But hey you did a nice work on the build, atm new people indeed will come to try this now that is is new thread, almost all new people want to try the retal bois (since they are famous and mentioned every moment possible , btw not saying they are bad) and forget these other classes. Of course it matters if you like the playstyle of face melting ray.

That must be some error that DPS

I didn’t look at the damage in SR. Don’t know how high it is. My aim was not to make the highest DPS build but a freezing build.

I dropped 7 magi rings only (2 Anubar, 1 Tawrot, 1 Khonsar and 3 Orissia) in about 160 Tomb of the Heretic runs since it was released

Numbers from the new dungeon.

Looks like I’ve been slightly unlucky if we consider the actual drop rate, but even with more luck, farming two specific magi rings can be really painful at the moment, lol.