The reason behind this build is to use The Mageslayer set which empowers Olexra’s Flash Freeze (works on nemesis) and makes useful its fire resistance reduction. OFF is combined with Vire’s Might and Judgment. Both are fully converted to fire and have reduced cooldowns. It is extremely funny build - you freeze enemies with OFF, judge them and then skate through them using Vire’s Might. You can be practically in constant movement and if you play carefully you don’t get hit much + freezing enemies with OFF. This build kills everything quite fast. SR 65-66 is relatively easy.

I have other builds using OFF here. I also have other skater builds here. All my builds are here.

Crafting bonus on helm, belt and ring is to stun resistance. Build uses one monster infrequent item - Zarthuzellan’s archive - try getting a prefix with physical resistance. 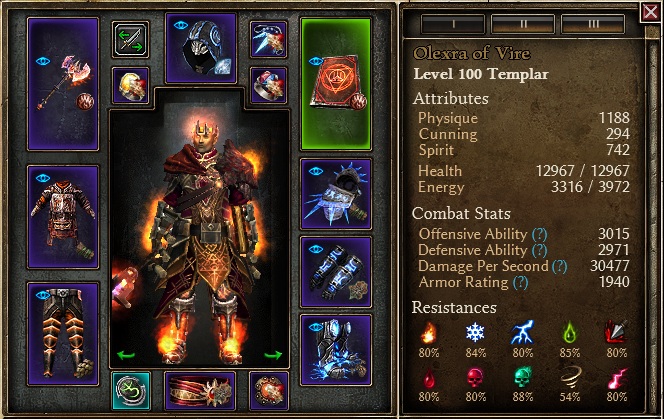 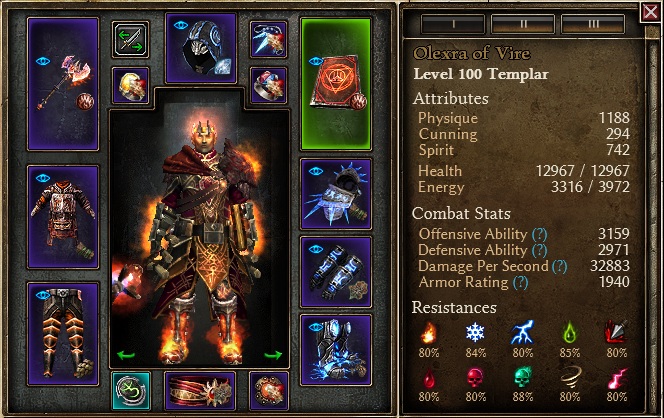 This build does SR 65-66 relatively easily. It can even do SR 80 with good mutators (if you can freeze enemies) but it is tougher. It is squishy in SR 80. If you can’t freeze Grava and Reaper it would be impossible in SR 80.

Hey there, newish player here! Im about to make my 3rd character. So far I got nex/orthus spellbreaker (the one that made me love OFF lol) and obsidian tremor pyro so far, both missing 2 items to finish the builds, and I thought about this one, specially for multiplayer (I play with 2/3 more friends usually). Is it a good option? I think OFF is great for multiplayer and I wanna try a caster. My initial thought was to make a lightning Druid, but after seeing this I think it might be better… if not, what would be the best/most fun caster for multiplayer?
Thanks!

I never play multiplayer games but It could be useful for the others as well. Check out my other OFF builds and pick one. I would take this one. Kills pretty fast. If you would want to freeze things as often as possible then pick up my AAR + OFF Sorcerer but it is glassy.

The combination of OFF and Judgment kills trash in singleplayer almost instantly. So this build has great AoE on trash.

Nice! I think this would be cooler as well, and I have almost all the items, just missing the weapon and rings… offhand can be easely farmable as well

Thnx for the input!

Any tips on leveling this char? im getting my ass kicked really bad lols

Conflagration + OFF from level 35 until then I would do Fireball + OFF or you can do TSS until level 35.