The reason behind this build is to make fire Blackwater Cocktail work with Olexra’s Flash Freeze. Herald of Blazing Ends, Zarthuzellan’s Codex and Mark of Burning Shadows are used for bonuses to BC + The Mageslayer set for bonuses to OFF. For healing spamming Stormfire from component is used. For additional burn damage Callidor’s Tempest and Blazing Eruption from relic are used. Gameplay is using OFF and then rotating couple of skills + spamming Stormfire. Build can do SR 65-66.

Build uses one monster infrequent item - Zarthuzellan’s Codex. Affixes are chosen for physical resistance and casting speed. Crafting bonuses on medal and helm are to freeze and stun resistance. 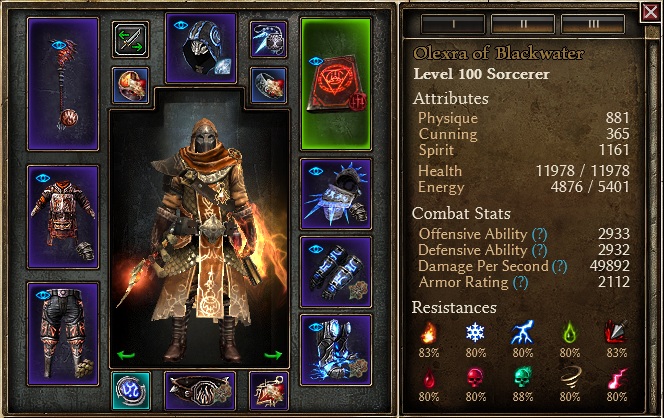 Build can do SR 65-66. It kills fast but it is squishier. Don’t facetank bosses but dance around them, you can kite easily with this build. Facetanking is tougher but doable most of the time (not with big physical hitters or Grava). Fighting with bad mutators is tougher against some bosses (Grava, Reaper) but still doable. Build is too squishy for SR 80. First three shards are OK but boss room is tough. You can sometimes finish it but not consistently.

Cool build. I haven’t played much with Olexra’s Flash Freeze so it’s nice to see some viable ways to use it!

I have already 11 of these builds and more to come.

Seems like it would be an interesting skill to use with a 100% conversion of Cold to Something.

Could be done possibly as well. There are a lot of combinations that can be done for OFF builds that can be on SR 65-66 level.

Awesome sounding build… Wish I actually knew how to get there as a newbie though with no reputation and no farmed gear.

Okexra and fire Skellies? I have a spellbinder which is crushing Ultimate and could be a great build of you want to put your brilliant mind to it ???

Oops someone is banned for the next millennia…