The reason behind this build is to make The Mageslayer set work with a Wradlith’s Bulwark that gives bonuses to Olexra’s Flash Freeze. Build also has some cold procs from items that freeze enemies or have a chance to freeze enemies (rings and belt). I also use skills that can do this (Olexra’s Flash Freeze, Amarasta’s Blade Burst, Ring of Steel, Scourge Strike and Amatok’s Breath). Gameplay is using OFF and then rotating couple of nukes. SR 65-66 is relatively easy. Sometimes it can finish even SR 80 but not consistently.

Build uses one monster infrequent item - Wradlith’s Bulwark. Affixes are chosen for CDR and life. Other affixes can work as well. Alternative for shield is the Watcher of the Frozen North. Crafting bonuses on medal and helm are to slow resistance. 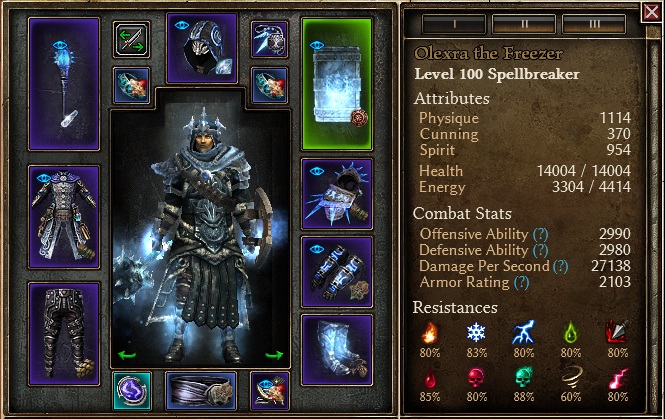 This build does SR 65-66 relatively easily. Killing Kuba is slow but not difficult. You can sometimes finish SR 80 but not consistently (not with Moosi or Kuba).

YESSSSSS. I love that shield, and i love flash freeze! Awesome to see a build utilizing the shield, seemed like a fun item to play with!

Finally got around to trying this out. Really killer, even without the Wradlith shield. Thanks for putting this up.