I decided this time to try one of the most hated skills in the game - fire Dreeg’s Evil Eye. Considering its damage is not great the only way to improve it is with massive RR and only Olexra’s Flash Freeze can do that - therefore I went for Warlock with The Mageslayer set. For converting DEE to fire I use Tome of Atonement. I also use ADCtH mod to DEE from medal. I went for cooldown version of DEE + cooldown reduction (and Eternity relic) because of damage reduction on it. I managed to make it from 6 s cooldown down to 4.1 s with my rolls on items. Damage reduction lasts for 4 s. You could play with 2 s cooldown because build is defensively fine. The visuals of the skill are not converted to fire and that is disappointing and the skill itself needs a buff damagewise but it can still be made into a comfortable SR 65-66 build. Defensively it is one of my better OFF builds. Offensively it is one of my weaker OFF builds. But it still kills stuff fine. Without that -200 % RR I have stacked fire DEE would be underwhelming. Now it is at least doable. Gameplay is use OFF then jump into the middle of mobs with teleport and use DEE. Spam Stormfire before you can use skills again. 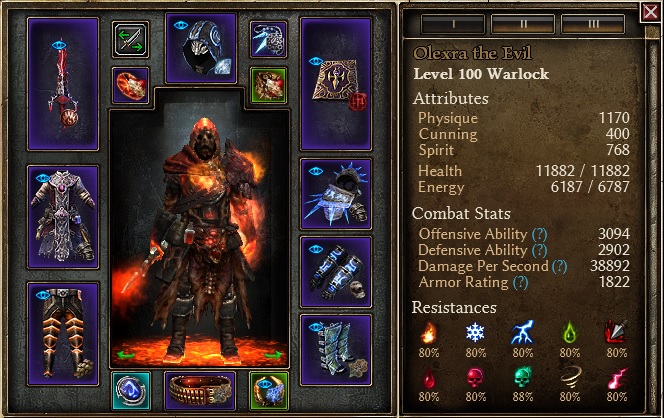 This build does SR 65-66 relatively easily. No boss is a problem except with bad mutators (not able to freeze) Grava is tougher but doable. It can with good mutators (able to freeze) do sometimes SR 80 but not consistently.

madlee is gonna hate you for this

I love how even on fire builds Star Pact is taken instead of Reckless Power. I raised this point in latest GM, but I’m too dumb to figure out how to make it more appealing.

If you would do mostly spam fire you wouldn’t have to but I have imoprtant skills (and devos) on cooldown. I don’t think that there is generally a problem with fire builds and Star Pact overusage.

Yeah, but, even Ulzuin sorcs use it, although a lot of CB’s damage comes from burn. Same deal for Pyran, where % fire seems more valuable to me due to amount of flat fire dealt per second.

I mean, every other exclusive grants super useful stuff like crit dmg, resists, dmg absorb, OA, ADCtH, and CDR. Reckless Power, on the other hand, provides fire and stun retaliation of all things, which are mostly useless (far as I’m aware, even Turion sorcs use Star Pact). And this makes RP the weakest exlusive despite its name.

Reckless Power is more useful for melee (especially for aether melee) and for AAR (or PRM). For cooldown casters Star Pact wins. Nothing bad about it. The only thing Reckless Power could get is more flat damage. Some builds with not much RR could use it and on Spellbinders Harbinger of Souls is better because of ADCtH. More flat should compensate it.

I wasn’t talking about retal (I know nothing about it). Just aether melee for example.

I know nothing about it)

I miss some gameplay info / skill rotation. A video would be great for an uncommon build.

I haven’t played Olexra but if you calculate this it seems like the freeze duration is ~1 second on SR bosses
(a few I checked have 138% freeze res).

Now cooldown DEE is extremely slow moving projectile so I wonder how you time it with Olexra to hit that freeze window. Maybe it even needs to be cast before Olexra? Because you play at a distance I suppose. Or do you facetank using Eyes of the Guardian?

OFF after that jump in with teleport skill and use DEE, spam Stormfire before you can use skills again. I forget to write this often. Have to do it more

But it always seems obvious to me.

I don’t play it at a distance. I tank enemies except Grava. You have Guardian’s Gaze, Blood of Dreeg and Mirror if necessarry.

It’s Meteors and Volcanos that do the heavy lifting here anyways.

I went for cooldown version of DEE + cooldown reduction (and Eternity relic) because of damage reduction on it.

I think it’s a cool fact or a decision making factor that with a transmuter adding cooldown to DEE you can have all of your (empowered) shots working with that -120% Fire Res on Bosses. If you delay Olexra just a tiny bit. Whereas if you went without transmuter some of them would be ‘wasted’ in that situation. It’s like a Diablo 3 Convention of Elements build.

Or if the off-hand didn’t add cooldown to DEE we could choose to spam it and maybe a different support class would be better then but we don’t really have such choice so we’re more inclined to the full cooldown version and Arcanist.