The reason behind this build is to make The Mageslayer set work with cold Devastation. Build uses Olexra’s Flash Freeze to freeze enemies and then you drop Devastation on them and Trozan’s Sky Shards. For cold devastation Arcanum Frigus gun is needed. For shorter cooldowns the build uses huge cooldown reduction and Eternity relic. For spamming between spells and for healing with lifesteal Chain Lightning from component is used. Your main defense is freezing enemies, then lifesteal, Pneumatic Burst, Ghoul and Mirror. Build is a glass canon. In long battles you will have to take energy potions. SR 65-66 is relatively easy.

I have other builds using OFF here. All my builds are here. 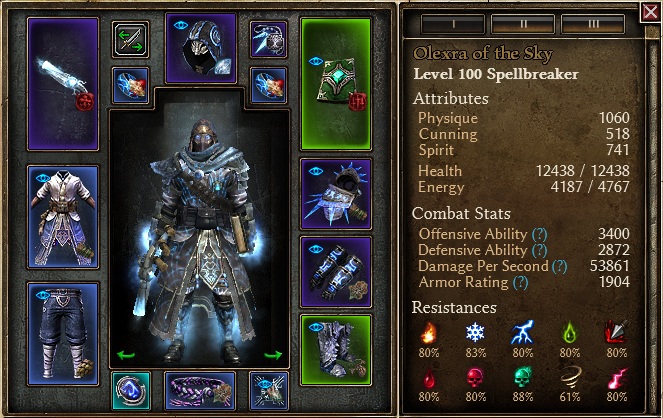 This build does SR 65-66 easily. It can even do SR 80 with good mutators (if you can freeze enemies) but it is tougher. It is squishy in SR 80. If you can’t freeze Kuba and Reaper it would be impossible in SR 80. Cold resistant nemesis are slower to kill.

Try build mageslayer around Hourglass devotion binded to olexra, if you cast it 2 times in row you may freeze bosses and keep them freezed all the time with additional freeze sources. Works vs every boss except Moosilauke.

Yes, I know but not my goal in this build. OFF with TSS and Eternity works OK as well. You don’t need to have 100 % freeze for it to be a great defense.

I have done that in this build [1.1.6.2] Albrecht the Freezer - Fire AAR + OFF Sorcerer with massive CDR and RR, extremely funny build, SR 65

It just makes game easier, nothing else change.

A bit but not by much. Going for Hourglass also means some compromises in the devos. I rather went for damage and RR instead. I also tried many variations of devotions and affixes and only this one was satisfactory to me. I did not try any combinations with Hourglass tho.

Is a build similar to this possible for Infiltrator?

No, infiltrator does not have Devastation or TSS and no Star Pact as well.

Noob here. Can someone explain to me how this devotion track works? I’m only level 50 right now, but I’ve been trying to replicate the devotions chosen and I don’t see how it’s possible with only 1 point in blue and 1 in yellow at the crossroads. What am I missing?

From what I can tell, the constellations here are:

One possible way - I am sure there are many other ways to do it.

Ah ok, I wasn’t thinking about how you could remove specific points along the way. Thanks for the response!