The reason behind this build is to make another AAR tank - this time fire AAR with my favourite class combo - Templar. Tankiness comes from 10 % ADCtH to AAR from amulet and off-hand. Additional healing is from devotions - Bat and Scales - partial conversion from vitality and pierce to fire (rings and belt). I also use healing increase mechanic - base is 20 % + all crafting bonuses are to it (up to 32 % total) and Resilience increases it even more (up to 52 % total). Build is comfortable to play. You don’t interrupt AAR much - only Ascension and Judgment need to be used with it. Build kills fast and is relatively tanky. It is not as tanky as my other two AAR tanks (aether and chaos). It kills faster than my chaos AAR and less fast than my aether AAR build. It can do SR 80. 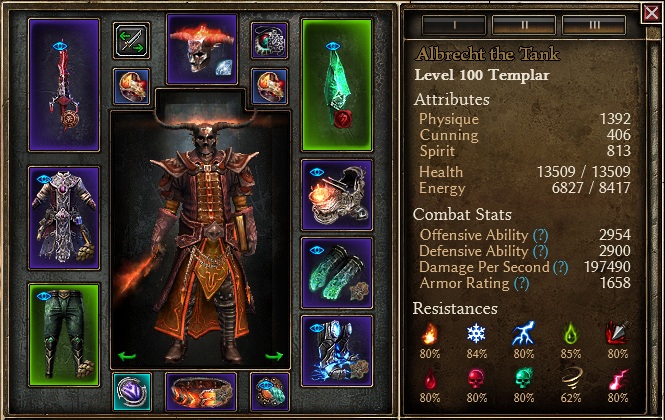 image from the game with passive buffs + Ascension, Elemental Imbalance and Inspiration 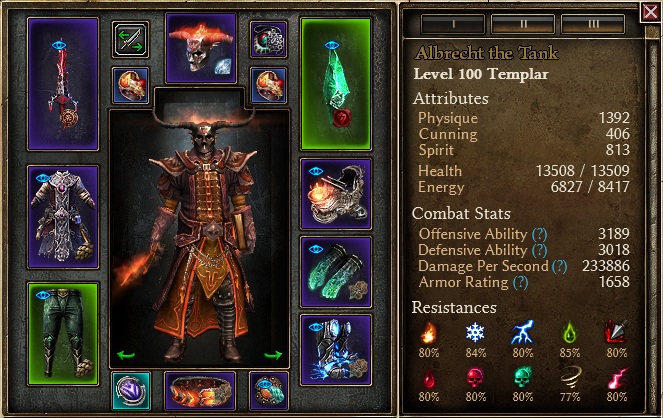 Do you have a leveling guide for this build?

I have seen almost ALL of your builds Duchy, I like some of them, but i find that most of your builds arent good in crucibal. I really wish you could try to make one because I feel like you have so much potential but the builds are half done. Still thanks for the builds.

That is because I don’t care at all about Crucible. I never played it and I don’t plan changing it. I also don’t see any point playing past SR 65-66. It is easily accessible and good for farming and you can buy SR set also. Anything above this reduces greatly possible combinations for builds. There are enough of smug ‘elitist (russian)’ builders already. Try their builds for CR. I prefer main camapign and I don’t even like SR that much but it is good for farming and to complete your char you need SR 50. So instead I play SR 65-66 - you complete your char and have access to all items. If char points and SR set weren’t in SR I wouldn’t even play it and just stick to MC. I don’t like much this modern nonsense like CR and SR.

Also I am now taking some time off from gaming but I will be back sometime in the future.

thanks for this build Duchy, are you from Holland ? I don´t play Crucible and no SR so far either.

Is this build still viable?