The reason behind this build is to create a truly pirecing laser using pierce damage. Because of limited conversion possibilities AAR is not an option, so I went for Obliteration from Tome of Arcane Wastes. Infiltrator is a natural choice for a piercing build. For conversion from elemental to piercing damage I use two Bladetwister Signet rings and Pack of Treacherous Means belt. For survival build uses Bat, Ghoul and Scales. Vitality is partly converted to piercing with Murderer’s Epaulets monster infrequent shoulders. These shoulders are absolutely necessary. Everything else is picked to make the stats of the build OK. Gameplay is first use Horn of Gandarr for damage reduction to enemies then Word of Pain for resistance reduction and then pierce with laser

You have two healing skills on standby so use them wisely + Inquisitor’s Seal. Build is susceptible to heavy physical hits but with careful timing of healing skills you can withstand them or you can avoid them with Displacement. Performance of the build strongly depends on your good timing of using skills. You can facetank most of the time in SR. Build is capable of doing SR 65-66.

I have other laser builds here. All my builds are here.

There are two monster infrequent items in this build - Murderer’s Epaulets and Dermapteran Slicer. Both are easily farmable. On the shoulders you want physical resistance and OA. On the sword you want casting speed. I have chosen the best affixes so that they are not double rare. You also need Ravager’s helm. You can farm it from Ravager of Flesh on elite difficulty with another character. There are also six craftable items - belt, medal, boots, gloves, pants and amulet. I have picked four crafting bonuses to slow resistance, one to stun resistance and one to physique.

image from the game with passive buffs + Pneumatic Burst, Word of Renewal and Inquisitor’s Seal 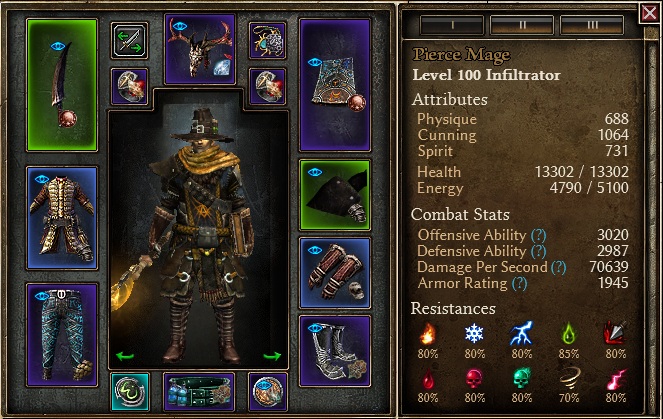 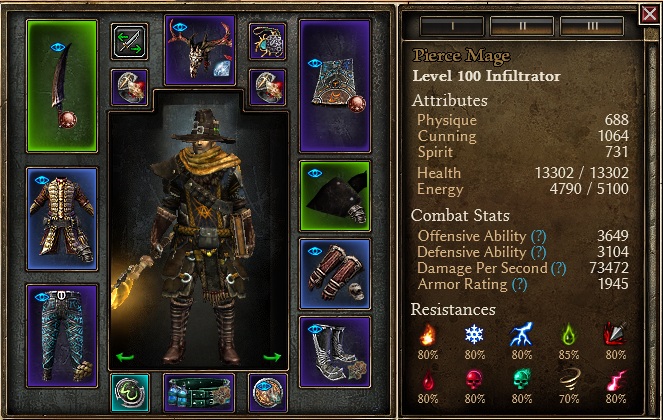 This build does SR 65-66 relatively easily. Performance depends on your timing of using skills. Build is demanding on the player. Enemies go down relatively fast. You can facteank most of the time in SR. Toughest enemy for this build is the Reaper. In SR 80 it can do first three shards and gets destroyed by physical hitters in boss room.

I have tried to make a piercing AAR using only elemental conversion to piercing (aether is not available in the game). Damage should be on par with Obliteration this way if one can manage to make the stats good. I was not able to do it. Perhaps someone can make it better. I have not given it that much thought. Here is what I created in grimtools. https://www.grimtools.com/calc/qNYoYXBV

btw the only way to get phys res (?) on the shoulders is via Formiddable prefix.

Yes, but they are OK to farm. And with next patch it will be easier. Even without it you would still have OKish 23 % phys res. But heavy phys hits are dangerous on this char. And you have to heal immediately after them. You don’t have instant heal like Serenity that would help automatically. So it depends on your reflexes. But you have two healing skills and they don’t interrupt the laser.

yeah I am not farming any MI’s in Main Campaign now, don’t wanna waste my RNG until next patch

btw seal of skies, only for OA and +%pierce dmg? You will loose some pierce wpn dmg due to the conversion (phys to cold takes place before armor piercing) but perhaps that is not so important?

Yes but it is not that important. OA and pierce damage is more important.

hi, i am very interested in your build. Can u give us a guide on leveling based on your build? Which skills to prioritize? Thanks in advance.

I would level with elemental Word of Pain and Stormbox in the early levels. At level 35 I would start to use fire Conflagration. At level 65 I would switch to elemental Obliteration and at level 94 you can switch to pierce. But it is not a beginner friendly build. You need to be able to kill Ravager with some of your previous builds. At least kill him on normal for level 75 blue helm. That should be doable for everybody with a half decent build.

nice build sir. i was trying similar build but didnt perform well. are there alternatives for shoulders and weapon, legendary prefer?

Most definitely not for shoulders. You need that conversion from vitality to pierce for Bat and Scales to keep you alive. You could do another weapon but no other pierce weapon has casting speed on it. This one can roll casting speed. Both MI’s are easily farmable from many monsters. With next patch it should be easy to get some useful combination.

https://www.grimtools.com/db/items/12624
But then the Blades of Nandaan devotion will not work

Nice I forgot totally about ranged weapons. This could be used instead of the sword. And it has stun res on it. Good option

But the sword will be better damagewise. Nice flat damage for healing skills that use % WD.

But farming those derp slices is very easy, they drop like flies