I have made a chaos AAR Warlock some time ago. I planned to post it but @Willnoword made a better chaos AAR Warlock, so there was no point to it. But lately I decided to make some tanky AAR builds. I repurposed this Warlock into a chaos AAR tank. It uses typical items for chaos AAR or AAR in general. There is not much leeway in what to use. But the most important thing are the devotions that is where the additional tankiness comes from. This build already has damage reduction from Maiven’s Sphere and Possession. There is also damage reduction from the helm. This is a good base to start from. To enhance this I decided to went for Ishtak in the devotions that gives damage absorption as well. In my version I have 18 % damage reduction from the helm, 22 % damage absoprtion from Maiven, 19 % damage absorption from Possesion and 25 % damage absorption from Ishtak. That makes in total 0.82x0.78x0.81x0.75=0.39 therefore you only take 39 % of damage. Because of the lowest cooldown for Ishtak (and Mirror as well) I also use Time Dilation and Eternity Relic in addition with nice CDR from items. This also causes practically 100 % uptime for the Ritual Circle. For healing amulet with ADCtH to AAR is used, Sigil of Consumption, Scales and Bat. Half of vitality damage is converted to chaos through the belt. Build does SR 65-66 easily (it can go a lot deeper). I killed even Ravager with it (facetanking first half and a lot of the second half). But it kills significantly slower than my previous tanky aether AAR Spellbinder (aether is just better damage type than chaos generally). Ravager took 2 times as long!

I have other laser builds here. All my builds are here.

Build uses one monster infrequent item - Alexander’s Legguards. You want bonuses to chaos damage, OA and DA. Crafting bonus on the helm is to freeze resistance. 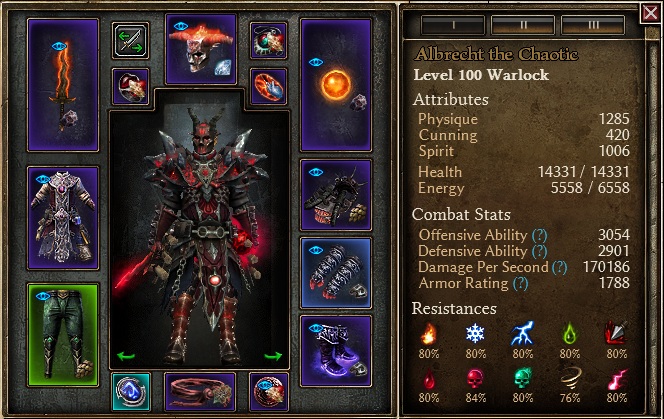 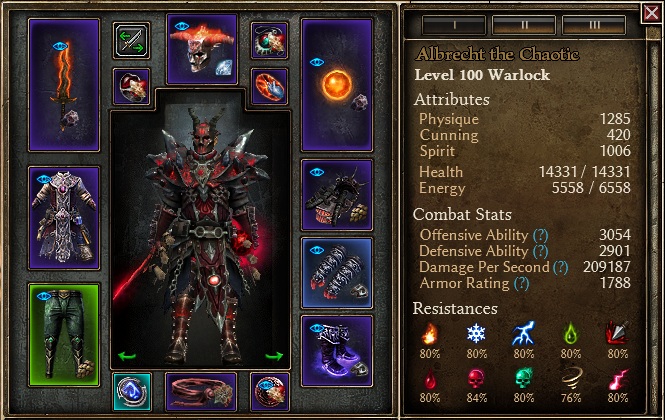 Maybe all are doable but I only killed Ravager (I like his helm). Others I don’t care about. You can facetank him for the first half of his life easily and for a lot of his second half as well but sometimes you have to disengage and wait for cooldowns to end. Be aware that facetanking him is not easy. You have to time everything correctly for couple of minutes. It took around 10-11 minutes to kill him. Although this build is tanky the aether version is just better for killing Celestials (2 times faster with aether AAR).

For Ravager you need more OA to have comfortable fight, you can’t crit him being under 3.2k and without DA shred so your eternity will not reset, crit damage will not work too.
Consider this devotion route: https://www.grimtools.com/calc/YNnX5xbV (I did not take closer look at components/auguments, just few swaps I think may be better)
More OA/DA/crit and healing from AAR.

That is more classical route to go. I just wanted to try it with Ishtak so that it is thematic considering lots of absorption and reduction. But I will try it when I find some time for it in the next few days.

I don’t have enough OA for Ravager crits on the aether AAR version as well then (around 3150 if you count in DA reduction). But still 3x better kill time with similar DPS and RR can’t just make that difference.

And I didn’t make this build for killing Ravager. I just tried if it can kill him. But it was not the primary purpose.

! Slower than usual, but steadier.

I thought about Ishtak too, but in combination with Dying God to save decent damage. Is it possible?..

P.S. I hope to find great Aleksander’s pants in the upcoming patch to unleash full potential of AAR skill.

Thank you. It is easily possible from my devo map. I didn’t tuned the rest of the build. Just the devo map for that way https://www.grimtools.com/calc/vNQalMYN

. Need some polishing with resistances, especially Aether, and the build is ready for testing.

You can try it on your setup. I like the Time Dilation and it making Ritual Circle and Ishtak practically permanent. For fast killing I have the aether AAR version

They are both ± the same tankiness but aether kills so much faster.

Aether AAR builds were heavily nerfed in last patches. My Clairvoyant Warlock setup went from decent to below average, so I changed the sides

. Or maybe I just like Occultist exclusive skill too much.

Then look at my version of the Clairvoyant here.