Translated by Yandex translator, sorry if the translation is bad

Hi, everybody. I would like to show a very strong build for beginners, which consists of faction things, while the efficiency in endgame is not inferior to many builds in BISS shmote.

This is a Ritualist Custer on health damage 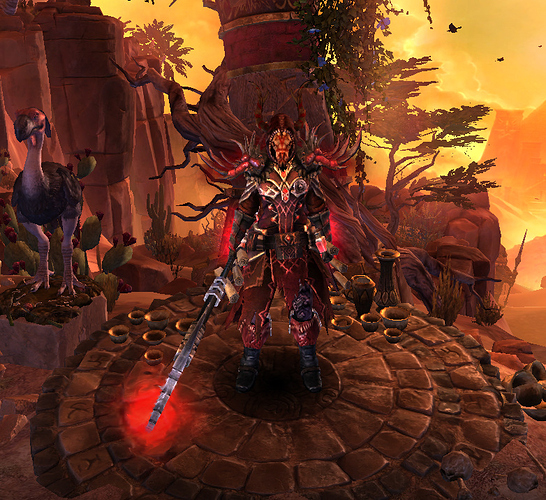 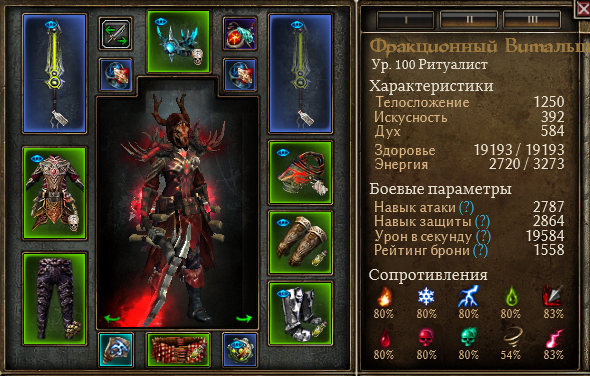 All items presented on it are purchased from the factions either immediately or in the form of recipes, such as a neck, belt, and relic.
The exception in the build is the pants, they are not faction based, so we replaced them with extremely affordable bismiel guard pants with a yellow suffix for % health damage.

Now I want to pay more detailed attention to the above-mentioned trousers and belt. Let’s start with the pants. It is not necessary to run to the boss and farm your pants with this suffix, although it is quite simple. You will fit absolutely any basic bismiel pants, with absolutely any prefixes and suffixes, while some holes in the build for resistances and other parameters will not be, in the build I specified only the suffix to the pants, and the boss’s pants fall, having both the suffix and the prefix, that is, even your first knocked out from the boss pants, in 99% of cases, will be better than those in the calculator. Therefore, it is absolutely not difficult to get pants.

About the belt. With him, the picture is similar. You buy the recipe from the fraction and craft it. Again, it is not necessary to craft exactly the same belt, we only need the base of the item, you can use the first created belt, which will not cause holes in the build. For reference. Skraftil 30 belts, of which 5 were +% to our profile health damage. Therefore, if you do not have enough game funds, craft one belt and put it on the Persian immediately, it may be even better than the one indicated in the calculator.

I tried to use all the components, almost basic, which even many beginners have, except for inserts in the rings, if there is no recipe for them, insert boldly instead of them the marks of an illusion or a fragment of the soul, and over the limit to bleeding, try to close with a craft belt or pants. The build in this regard is flexible, variable, you can change a lot.

About lvling. Since this is a faction thing, it has versions for lower levels. Already at level 65, you will be able to put on, most of the things, a sword at 84 and already the final Assembly you will be ready for level 90. About the game up to level 65. I highly recommend to start swinging from the Shaman’s branch, through the primal blow, two-handed gun and collect things for + % lightning damage, vampirism, attack skill, defense and resistance, in the sky to take Bat, Kraken, ghoul, Crown. This is enough for you to take level 65. To achieve the 65 level, you can optionally change into a plan to build and put the emphasis in pumping on the insatiable earth and its 2 nodes, the totem of the wendigo and his 2 nod, Roy shaman, an aura of ghostly bonds Ulta necromancer, and Herald of souls, as from the necromancer. Well, then on the calculator that is thrown above.

When you take 90 and 100 levels, get the final build, get enough of it and collect a lot of stuff, and if you want to improve the build and make it stronger, then the text below is dedicated to this.

Improve the build can be very easy, for this we need a set of dark gift, which is not just randomly falls, and get a specific location for the second super secret quest Daila (SPOILER link to its passage https://steamcommunity.com/sharedfiles/filedetails/?id=1448920559), there in the location of the edge of reality, it is very easy with the Summoners of the rifts, you can get a set that will already strengthen the build.
If on this, the desire to strengthen will remain, then I recommend the final version of things, for example, the vital peel build https://www.grimtools.com/calc/lV7YrEyN and for example its results in endgame:
[1.1.6.2] Conjurer. Full game content no greens: 100 SR, Callagadra, Ravager, Avatar, Crate of Entertainment, Lokarr, Bourbon clones, Mad Queen and 150-170 crucible extra spawn without buffs and banners

Below I present the results of the faction version of the build and its features. The absolute campaign for the build will not present even a gram of complexity. And his abilities will show and reveal in the game’s endgame views. Enjoy your viewing.

I hope newcomers and those who do not have so much loot in the game, this strong faction gear build will come in handy. Thanks for your attention.

@medea_fleecestealer : could you mayhaps help to clarify the title and in the thread itself, that this is faction gear only and not fractional math

Done and also tidied up the text a bit too.

Nice, nice. Vitality builds are strong and even faction version can kick some ass

Cool! The faction gear is pretty good, you can do some surprising things with it. Purples are frequently lacking the right resists so often when you gain in power you lose something else.

TY for the guide Alex

As a new player I welcome these faction based guides as something I can achieve with the minimum gear requirements. This will likely be my next build once I have gotten revered on a few more factions so I can buy the mandates.

Just got up to level 50 so far and leveling has been really smooth. I started out on normal but actually put it up to veteran after act 1. Honestly not really noticed too much difference - damage feels really nice even early on!! I did hit lvl 15 in Crucible first just to get Bat unlocked for some early sustain and so I could level as RE from the beginning of my journey.

I was looking at the devotions a bit and was wondering if Will of Rattosh could be substituted for Abominable Might? I know you lose some Vitality RR and some Life Leech Reduction but the build doesn’t seem too short on Vit RR or on life leech in general and it seems to me a bit easier to build a nicer devotion tree if you go for the Abomination devotion.

Would like to hear your thoughts or anybody else’s. Still really new to the game so just trying to see what I can change without me accidentally killing the build unknowingly!!

What skills would you recommend prioritising for levelling?