I made a mage with a K-RPG reflexive twitch-styled gameplay. Check out the vid below to have a look at the playstyle, it’s really fun!

This is an AOE hit-and-run character, Flashfire boasts a lovely 120% crit damage. With 3150 OA and a nice wide reaching 122 DA debuff to enemies, most attacks are critically hitting.

When all burn dots are up and critting, I see numbers of 550k per second WITHOUT CRUCIBLE BUFFS.

most attacks are critically hitting.

Fair call. But I do get very excited about it, so at least it feels like every attack is always forever critting, right??

I was just thinking “But I see lots of yellow numbers!”, and yes - that’s because the yellow numbers are designed to be more prominent on screen than the white ones. Hah.

Any replacement for reign of ice and fire? Im playing with Duchy’s build atm and using it to farm the vanquisher set (got 2 pieces so far) to try both builds… only missing that ring now!

@johndois
Myth. Combustion Band if you’ve got it for some extra Fire RR maybe

Otherwise, something else that gives +OA and +ele resists

thats the one im using so far already

thnx for the input

No worries! Thanks for showing interest in the build, I hope you enjoy it

How deep did you went on SR with this build? I could do 65 with duchys build, with a lot of deaths xD
Also I finally got the recipe for reign of ice and fire

I haven’t stress-tested it in solo SR yet. I imagine it will be able to do SR75, but it will be very hard to do so. The build’s primary defense is mobility, and the build lacks stun resistance. The playstyle of this character takes a bit of practice to dodge things like Kaisan’s leap for example. But, the hit-and-run nature of the build allows for kiting, and with low cooldown mobility skills, it’s easy to outrun almost all enemies.

Short answer: I think it’s possible, but it will take PRACTICE.

Man it is really hard for me to die in SR 65-66 with that build. Only 5 deaths in total gameplay and I play very recklessly. Plus you almost don’t get hit because of movement skills and you freeze things. You must do something wrong. It is a build that does SR 65-66 very easily and it should be able to go a lot higher. It is actually one of my easiest builds to play SR with. 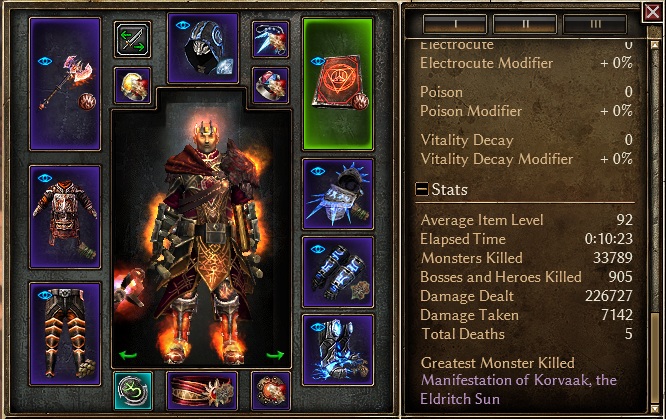 I gotta practice more i think, i have like 100 deaths already hahaha… is the playstyle for your build the same as WyreZ? go in, OFF + judgement, leap out and spam fireballs?

Yes, it is the same. Plus I use The Mageslayer set for freezing even nemesis and thus applying that heavy RR from OFF. I now played once in SR 65-66 with it again and I used only one health potion.
I think his build should do more damage and mine should be more defensive but I still kill everything in seconds.

loving the build, super fun to play with… have you tried it against celestials as well?

I don’t play against them much. Only Ravager because of his helm. This build is not good for Ravager. Mogdrogen and Lokarr should be doable. But if you have problems in SR 65-66 then learn to play with it first.

im having a hard time with the bosses room, im making SR 60 and theyre kicking my butt really bad lol

With freezing and movement skills plus all the procs and mirror on top of it you should killthem easily even when they gang bang you. And if you pull them one by one then there should be no problem at all. You must now well the attacks that enemies use and when to avoid them.

You can try pointing your camera south in the boss room but it shouldn’t be necessary at all with this build.

That is because of his volcano’s. In his second phase run away from volcano’s and when he prepares to hit you use vire or disengage rune to move and he should be fine. Be careful with low health he can’t be frozen (gets bonuses to CC res). You have to know your enemies well

Plus I use The Mageslayer set for freezing even nemesis and thus applying that heavy RR from OFF.

I was wondering, how do you level an OFF Mageslayer character? I get that he’s a killer endgame but what about up until then?