Hello, just another retaliation build for my collection, lightning warder this time. I made it based about Rata a lot because mage type enemies can slow build like that in Crucible a lot. I did not go full offense too, wanted it to be viable in sr and for celestials too. I focused more on Crucible but it’s possible to make it viable in sr100+++ with stacking armor, da and going with Dryad + Scales + Absolution but that was not my target with that build so only sr100 this time, maybe later I will add another variation.

Changed some skillpoints because of buffs to Storm Touched, for more tankiness and deep sr stay with 1.1.7.0 version because more points into Overguard.

I use Citadel relic + Callagadra helmet because it gave me best results - with shotgun Vire Cascade + chance for %all retal damage we can burst down worst enemies like Alexander or any mages, it increased clearing speed a lot. Dawnshield helmet can be used instead of Callagadra but it’s a little bit worse choice with Honor.

Medal can be changed for Markovian’s Stratagem (in theory may be few seconds faster because additional rata) but this rare one is faster vs superbosses, we can help fix resistances with some prefixes and it has %armor + 12% heal on Overguard. Mythical Serenir’s Commendation is another viable choice.

Instead of 1 ring of Sethris some Creeping Ring with multiresistances mod + OA/DA is absolutely viable.

All performance videos were played with ~2.7k da as in GT link, do not be afraid of survivality. The more chance enemy has to hit us the faster he will die. With 5k Armor, absorbtion, overcaped resistances, block and 20k health character shouldn’t die.

Sr 100 - this build is not designed for it really, 1-3 chunks are annyoing but I recorded it just to show our survivality with 2.7k da is more than enough in some normal content. With pharma used it could go easier probably.

Callagadra 1:48 with pharma because 2.7k da is not so safe vs her, especially we have no absolution. She is dangerous after reaching 50%.

Crate facetanked with some kiting away from his one-shotting boxes, pharma used. Medal switched for Serenir’s Commendation and auguments in jewelery for 3x Arcanum dust to overcap elemental resistances.

Honor, corrected. My memory is horrible for english names, I often confuse these both.

Hey, man. It seems to be really well put together!

One thing I don’t get tho - why stack OA in jewellery slots? Seems like so much OA in favour of less critable DA doesn’t make much sense here, no?

Sir do you think this build better than Sentinel of the Three Witchblade ? ı mean after the patch

@mad_lee Thanks! I try to stay lower DA if I go for clearing speed to not make enemies miss and Rata damage can crit so going with higher OA is imo worth it, especially for superbosses (I like over 3.3k OA vs them). I tryied to go with Storm Powders (more +% retaliation and flat lightning) but I did not see difference in Crucible and celestial times slighty decreased. I tryied to stack DA more and go with lower OA and in 150-170 I was often close to 7min which didn’t happen after oa stacking and Ravager was over 2min.

Imo until going really deep sr going for high DA for so tanky retal is not worth it because even after being crit almost whole damage is going to be absorbed.

@polat_yusuf_ozturk Witchblade is way faster but this one is safer and do not require calculating Grava’s nullify cooldown in sr.

I don’t know much of retal builds but results speak for how well you put it together.

I know Warder is standard class for retaliation but have you tried Archon like Aegis for example?

Thank you! I didn’t try lightning aegis build yet but looking at items I see some posibilites for it, probably will try it in future.

Impressive, I was told lightning retal is weak after rework, but 6:30 and sr100 for this kind of a build is just wow.

Thanks! Imo it’s in good spot, it’s not fastest build ever but 6:30 is okay for me, especially it’s unkillable and can clear everything what game offers. Dawnseeker warder is pretty flexible in building too, can go damage or just pure tank like warlord if someone wants to delve way over sr100. 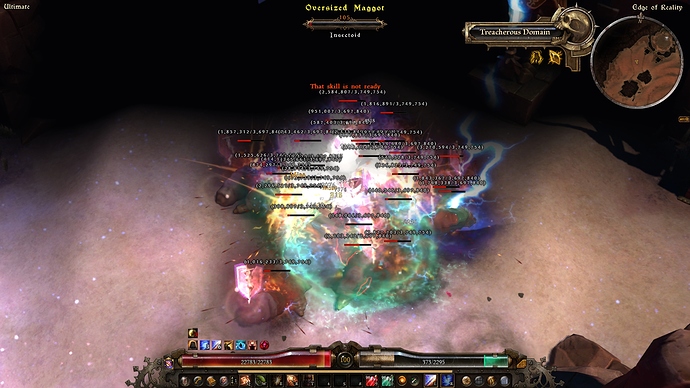 Changed some skillpoints due to buffs for Storm Touched and did crucible run, it was 5:50 now, added video. I think I can do it faster with grim internals and some amount of fishing. I have no idea how Vanguard banners would work now, I am afraid to use them because I don’t know how to play around them.

Hi, can i ask some questions…
Can i level with your build?
Can i use self found gears?
Please advise…

Leveling with retaliation is not good idea, it’s very gear demanding concept. I suggest to do that with 2H ranged weapon + Primal strike.

This build is not very expensive so it can be done with self found gear. Only getting 2x Ring of Sethris may be problematic without hard grind so use 1 of them + rare Creeping Ring or 2x Creeping rings, it’s going be okay. Callagadra helmet can be dropped on elite, before you can use Dawnguard one or even Fettan Mask for +1 skills.

Added 5:10 run. Probably sub5 if some of our top speedrunners would pilot it. Maybe adding some racial damage with outcast wrath/purified salt/bone would make it faster but less tanky in sr too.

Nice build! Avenger or Citadel as relic are both inferior? Avenger has nice proc (as per description).

That is… savage? Great build, I’ve thought that lighthing retal is a meme. I was wrong.

Thanks for the reply…so for leveling, what’s your opinions on the skills and when should i change to retal? What about devotions?

@grey-maybe Thank you! Current performance (being close to 5min) is mostly because it was buffed in hotfix.

@AngmarDT The reason I took Honor was enemies like Alexander/mages spawned on 161/aetherial trio and other no-hard meele hitters, it was slowing runs a lot of, they must be bursted out fast and any other relic can’t help you so much with it. 2nd best choice I would say is Absolution because of tankyness but until you go over sr100 it’s not really needed.

Just skip inquisitor side, on Soldier take just bottom skills or any passive-buffs but prioritize Shaman before.