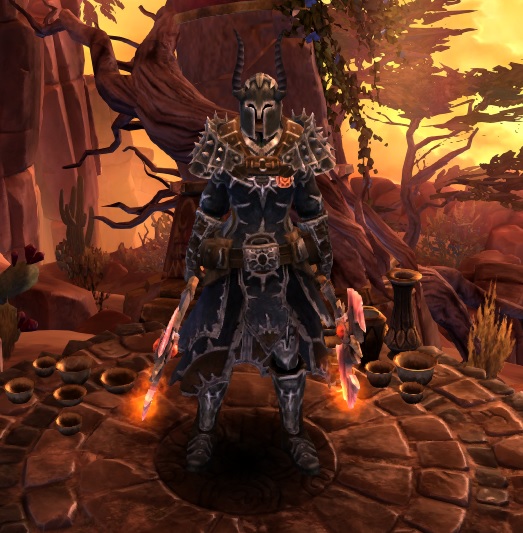 I didn’t have a lot of hope for this build. It started very slowly and badly, with an idea to use Alladrah’s Spellblade for a fire-based autoattacker rather than spinning. I chose Archon because the weapon had bonuses to Savagery, it had Oathkeeper points, apparent synergy with Divine Mandate, and a strong fire-based ability in Judgment. The result was an unplayable build that had no damage, no sustain and no survivability. I kept asking myself, Why am I playing this class?

Things got better when I decided to try using Servitor’s Cleavers for Righteous Fervor instead. The damage was immediately much stronger. It got better still when I noticed that I had sources of flat damage that I could convert to fire. They got better again when I decided to switch from Rhowan’s Crown to Manticore to get more physical resistance.

But still I kept asking myself: why am I playing this class? What was I getting out of this character being an Archon rather than a Shieldbreaker or a Paladin? How can I make its flavor not just come out, but really pop? And then it hit me: Cyclone Mask. Maybe the most iconic piece of Archon gear. It contributes +1 to all skills and makes Wind Devil bring meaningful fire damage to the table. I came full circle to using EoR gear again! 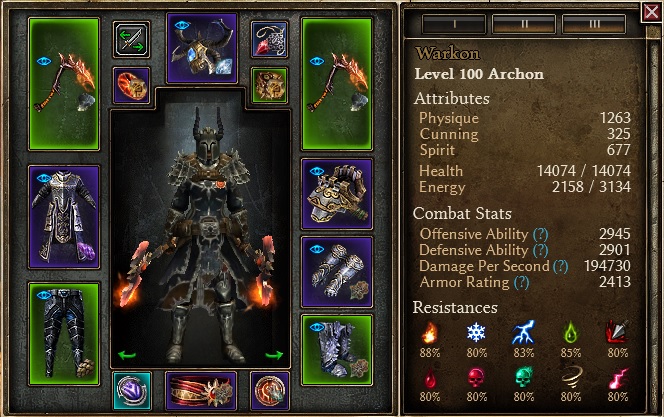 DPS with all procs active, 9 stacks of Righteous Fervor, and Iskandra relic.

This is a dual-wield fire melee Archon. And actually, the build ended up being far better than I expected. I’ve done all the roguelike dungeons and managed my first ever clear of Ultimate SR 75. I suspect a better player than I could get a good time in Crucible, but I’m no good in there. Too fast-paced for me.

The build is like this: convert all the flat physical in the world, get just enough DA and physical resist to survive, and overcome the shortcomings of 1H Shaman with solid DPS. But it took a lot of trial and error to find the right pieces to make it work well.

The first pillar is an MI weapon added with the Oathkeeper class itself in FG: Servitor’s Cleaver. The weapon fully converts all physical damage to fire on Righteous Fervor. The flat physical damage from Mogdrogen’s Pact and Rebuke are added to the weapon damage on both the main hand and offhand. The mod also pulls in the internal trauma from Divine Mandate and Presence of Virtue for good measure, and converts them to burn. The best roll on the axe would be Infernal/Ruin, but the build performs very well with a Runecaster/Alacrity and a Searing/Alacrity. The racial damage on Runecaster is awesome against Grava’Thul, who is a tough opponent for this build.

Combustion Band is purely for fire RR, which you can’t get enough of. It can be replaced with Reign of Ice and Fire or a Pyre ring. Gargabol ring is required for RF points; roll is for OA/DA. Mythical Alazra’s Ruby is a blue that provides +1 to Oathkeeper, RF points, and flat fire damage. I couldn’t find a suitable replacement that performs well, though an Oathkeeper conduit or Kaisan amulet could be used with a substantial damage loss.

Justice 3 piece supports Judgment, while also offering a bunch of attack speed and flat fire damage. Cyclone Mask is for skill points and useful conversion on Wind Devil; sadly the flat lightning damage is wasted, but still the mask makes an essential contribution here. Craft for stun res and accept freeze if you get it.

Lotus belt is the best of several meh choices here; the Avenger belt, so good in most Archon builds, isn’t optimal here because it’s a dual-wield build. Since I opted for Manticore to shore up physical resist, it made sense to also pick up some acid conversion. It outperforms the Ulzuin belt for Demolitionists, but only just.

Iskandra’s relic gives a large (~30%) boost to damage at the expense of survival in some encounters, compared with Serenity. The performance is dramatically different but so is the risk factor. I find myself switching back and forth a lot if I want more burst damage or more survival.

All of the rolls on the greens were chosen to pump OA/DA, which are low with only suitable purple gear.

This is a rare 1.1.7 build that does not use any vitality conversion at all. It wasn’t for lack of trying; the gear that doesn’t have it is just that much better. The key thing is that higher damage is higher sustain. The build feels better with 9% leech than my other builds have felt with 20%.

The main drawback of the build is the reliance on Blood Pact. It takes a solid second from when you drop the totem to when it gives you its buff, and that’s also when you have no stacks of RF yet. So you can drop quick and then hopefully recover… or you wait in your totem aura and let them come to you.

Very big credit to @fordprefect for massive help and support, and @Nery for a great suggestion on the Iskandra relic.

Man, I just finished an RF build as well but completely different. Is it squishy with that low lifesteal?

It can get overwhelmed. Korvaak is a very difficult opponent and also Seeker of the Damned on 75 was a big challenge, but you can cheese it by hiding in spawn and waiting for Ascension. You can do dungeons quite reliably and it has enough DA to feel safe most of the time.

Your grimtools link is with Serenity relic.

Setup is exactly the same to run Serenity or Iskandra’s. 24/16 RF is more important than 26/16 because there you get the extra charge. I think you don’t miss anything critical with 1 less point other than 1% max resistances on Resilience, which you can take out of Rebuke or Mogdrogen’s.

DPS sheet with Serenity and all procs instead of Iskandra: (less bursty but more steady damage) 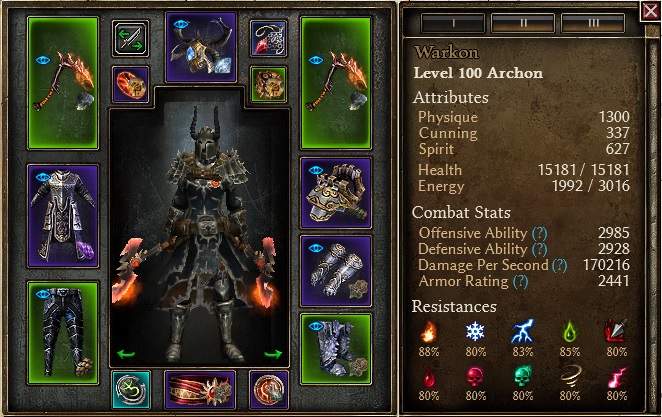 Have you considered using Seal of Void for 2x WPS skills, which will be stacking nicely with charge based attack of RF?

I played with 2x Void for a couple weeks. I switched to Flint because the phys > chaos conversion on Void impacts Smite. Overall the performance is similar but 2x Flint is better against chthonics because Smite is then stronger, and that helps against Grava who I was fighting constantly while farming weapons.

Since the main damage source is physical>fire conversion; flints are slightly better with more weapon damage. He even tried with one MI, one Blazeheart with seal of the voids and flints are better.

But you also lose AoE this way.

Meteor Shower needs the phys > fire conversion from Flint also. Smite hits 3 targets so making it stronger helps with AoE also. Overall it’s close, I will not say 100% you must take one over the other. I had good runs and successes with both Void and Flint.

You also have double rare green pants. Hard to get. I made Shieldbreaker using two Soulblades and I have 150k DPS. Kills everything fast but squishy. I have more lifesteal and with one hit replenish my life but taking physical hits is tough. Only 12k life. But does SR 65-66 easily and I don’t push higher.

Agreed, I would have liked to use as much purple as I can but unfortunately the weapons don’t bring much and I need to make up the stats. You need great rolls, not necessarily double rare, at least somewhere. Barbaros pants or Ignaffar are good substitutes if you have a good pair of Stoneplates or a spectacular Cleaver.

Physical hits were a big problem for this Archon too. At first I was running with 15% phys res and 20% leech. If Resilience and Serenity were down then I just fell over. Manticore and the 3 points in Wendigo were absolutely needed to do even 65 consistently. Chaos Strike’s DR is also essential, you have to use it rotationally.

That’s one clear advantage Archon has over Shieldbreaker, you get a lot of extra health from Heart of the Wild. Wind Devils are fantastic for procs, and you can go lower on ADCTH and make it up with Blood Pact. But Shieldbreaker has Vindictive Flame, Flashbang, Blast Shield, better conversion with Flame Touched, also a lot of advantages to that combo.

Archon with Soulblade would also work but I think it needs MI’s too since it’s a sword, so you will need a solid Gargoyle Belt along with the mandatory Light’s Oath ring. So you give up Combustion.