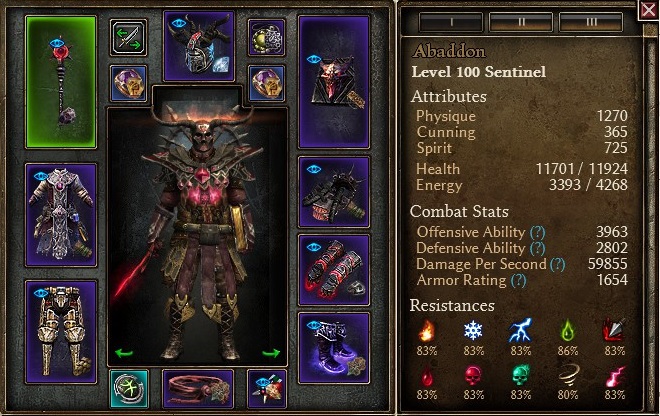 Amulet/Medal are forged for Armour. Head is forged for Stun resistance.

I’d recommend forging 1-2 pieces for Stun resistance and the others for armour or any other desired bonus.

Sigil of Consumption (Twin Fangs): Our main method of health recovery and a significant chunk of area damage.
Doom Bolt (Abominable Might): High single target damage to help speed up Bosses.
Bloody Pox (Raise the Dead): Lowers our enemies chance to hit/crit us by a large amount.
Blood of Dreeg: Provides a myriad of stat buffs including offensive ability and an on-demand heal.
Guardians of Empyrion (Flame Torrent): Our main source of AoE damage and a decent contributor to single target damage. They’re also good for picking off stragglers.
Ascension: Provides a boost to damage and flat damage absorption for defense while active.
Solael’s Flame (Hungering Void): Increases our damage output by debuffing our enemies.
Vire’s Cascade (Eldritch Fire): Primarily and reliably spreads Eldritch Fire through crowds and single targets. Also our main method of applying weapon-based effects like energy leech.

Solael’s Witchfire: 1 pointers for access to Consecrated Blade and some extra damage.
Possession: Provides defense through the skill disruption resistance, % damage absorption and more damage.
Presence of Virtue: Provides us with more offensive ability, health and increases all healing we receive from our life steal and potions.
Void Weapons: Increases our Chaos damage.
Severed Faith: Increases our Chaos damage and provides some useful stat buffs.

If playing the BiS version, two additional sources below can be included:

Voidheart: Provides -10% Chaos resistance as a debuff.
Vire’s Cascade: With an ‘of the Abyss’ weapon, it provides ~10% reduced target’s resistance.

Enough in Spirit to equip our off-hand, rest in Physique for much needed health and defensive ability.

When a fight starts place down a Sigil immediately - it’s your main source of recovery so you want it active ASAP. Debuff with Solael’s Flames and Bloody Pox and alongside your Sigils, keep them active at all times. Use Vire’s Cascade to spread Eldritch Fire and keep it up as another of your debuffs and finally, use a single Doom Bolt to trigger Abominable Might if it is not active. This is enough to clear crowds of common enemies.

For Heroes and above, follow the same steps except you now want to concentrate Doom Bolts squarely on the meatiest targets but watch your energy supply. Energy is the reason we have to be a bit more conservative with our Doom Bolts and cannot spam them so freely on crowds as we will eventually run out and have to use an energy potion. Generally I find I only need them in prolonged encounters that use a lot of Doom Bolts.

Keep Blood of Dreeg up all the time. Ascension can be used for a damage boost or an extra layer of defense that is effective against crowds and DoTs as you need it.

I hate when people post builds and don’t give it a proper look at the illusionist.