This is due to the Elemental->Pierce conversion on Mythical Pack of Treacherous Means being moved to ranged only disabling the use of Trozan’s Starkeeper for the extra projectile and Cold damage to Trozan’s Sky Shard. While we could just sub in a ranged weapon instead like Oathbearer like the no affixes version does below, it’s still a big hit to damage on an already average-at-best character. So technically - the idea still exists, it’s just significantly weaker now.

Am I angry or mad at this? Not really no, Pierce Sky Shard + Obliteration was a weird and bizarre idea to begin with that I wanted to see how far it could be pushed, but I wasn’t terribly attached to it. 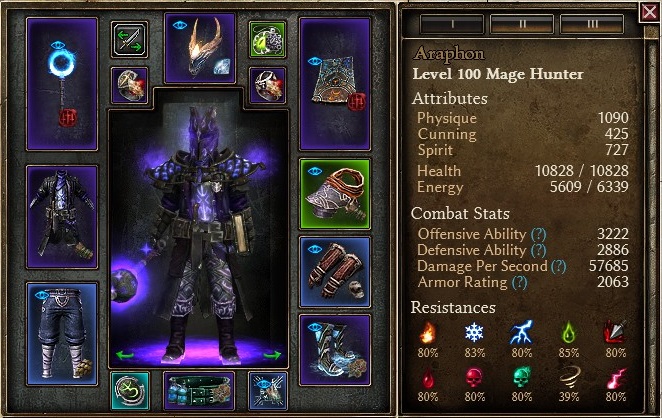 No Affixes Setup
For anyone that doesn’t want to go after Kaisan Eyes or Callagadra either, this is an untested, completely purple/blue version using the SR set that looks to be weaker offensively but stronger defensively.

Setup I use
Gear crafted for Stun resistance.

Abilities
Obliteration (Twin Fangs): One of our main damage skills for AoE and to keep damage up.
Trozan’s Sky Shard (Assassin’s Mark): Our other damage dealer used for nuking crowds and bosses.
Mirror of Ereoctes: Temporary invincibility can save your life or give you an opportunity for free damage.
Nullification: Removes buffs on enemies.
Word of Pain (Shifting Sands): Additional crowd clear and Pierce RR.
Horn of Gandarr (Living Shadows): Reduces incoming damage taken and provides some CC with the Confuse.
Word of Renewal: Several nice defensive stats and an on-demand heal.
Inquisitor’s Seal (Blades of Wrath): Additional layer of defense with the flat damage absorption.

Iskandra’s Elemental Exchange: Aether resistance, OA and crit damage in big amounts. Great all around.
Maiven’s Sphere of Protection: Another layer of defense in % damage absorption.
Aura of Conviction: Damage and solves our physical resistance making us extra tanky.
Whirling Blades: Pierce resistance and armour are both good. The ADCtH also helps on adding a little extra to Shifting Sands and Blades of Wrath life steal capability.

In total, that leaves us at -106% Pierce resistance.

Attributes
As many points in Spirit to equip our off-hand, rest in Physique. More points can optionally go into Cunning for more damage at the cost of DA.

Playstyle
Debuff with Word of Pain and Horn of Gandarr and set a Seal down. Use TSS to devastate crowds or single Bosses and Obliteration to clean up or as an in-between to keep up on sustain on Twin Fangs. Use Mirror in emergency situations or as an offensive tool for the 3 seconds of free damage and Nullification to strip off buffs.

Don’t be afraid to use Seal offensively as well. Placed beneath a Boss, it’ll proc Blades of Wrath often shotgunning anything ontop of the Seal nicely and frequently. Placing a Seal ontop of crowds shreds them like paper.

Afterword on Gear Support
I want to take a minute below to talk about gear support, mainly in the form of skill bonuses on gear and for exotic/bizarre concepts as I feel some of them could do with some help:

Pierce Trozan? Like it! Also nice use of Obliteration skill.