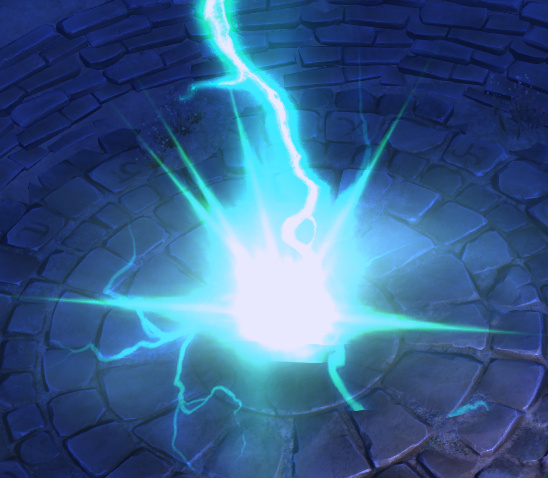 
Disclaimer : the build got consequently nerfed in 1.1.8.0, I need to redo the devotions to compensate as now it struggles again with Reaper…

The Clairvoyant Warlock, updated and optimized for high SR shards

Over the last patches, AAR got nerfed but Doom Bolt was buffed, so I adapted and focused on Doom Bolt to design a more kiting build, with the objective to tackle SR. The end result can facetank most nemesis, and kite the rest thanks to good defenses and leech. Only 2 MIs are used, the affixes are there to cover resistances thus are flexible.

Doom Bolt is the main damage dealer, with a cooldown below 2s and possible cooldown resets, and AAR is our filler spell to leech hp. The other spells are the usual utility warlock offers, making the build light on buttons.
The movement skill is a matter of preference, disengage runes may be the best choice now that they work correctly. Displacement is the fastest move, Fallen Kings has the lowest cooldown.

Levelling a warlock with aether damage is a bit gimmicky, I’ll see in 1.1.8 if I can make one that isn’t just a solo arcanist using Blood of Dreeg. Until then, I advise levelling with chaos damage, following my beginner guide :

[image] permanent buffs and Hungering Void active Introduction Welcome to my new guide, focusing on Aether Chaos Ray, Doom Bolt and Sigils of Consumption ! It is aimed at beginners and solo self-found players, to help you build a chaos warlock from character creation to a first lv100 setup without any prior gear. Feel free to ask any question in the thread, there is no dumb question ! What is the build about To sum it up quickly : it is a channeling, pure caster made to be tanky e…

Please link any gameplay if you have it. Doesn’t have to be high tier or perfect. Just playstyle

with a cooldown below 2s and possible cooldown resets

Very nice for an Aether build, I forgot you can afford the -1.5s gloves.

I figured a way to get some 1080p60, so I added a video of SR80 with aetherwarped and Reaper

It should demonstrate the ability to facetank with Valdaran and that beetle boss, and the looong kiting against Reaper, and yes I use nullification a lot, I don’t know if it matters a lot but I try to negate Reaper’s savagery with it.

oops, it’s added now ! I just don’t know how to embed it properly…

You need normal link, like www.youtube.com/watch etc not the short one
Also video need to be already processed by YT

Very nice!
HC viable? I want to try this build for hc i think…

The final build is very resilient, but there’s no way to level a warlock with aether damage, the aether support comes from the set, so you’d have to level another way…
Chaos damage comes to mind, AAR + Doom Bolt has support for it while levelling, you could add some sigils of consumption for extra leech and safety, but I’m not confident it would be HC viable

Why Possession not Reckless Power.

why not put in 6 more points to get 3% more damage reduction then? I feel the skill points could use some tweaks - I personally won’t soft cap nullification and mirror

Minor tweakings are a matter of preference, my gameplay is very messy so I use null and mirror a lot thus I hardcapped them, a better player could use those skill points for more damage with Vulnerability, Devastation… and put more attributes in spirit.
It’s up to you, I just play (too) safe.

How do you move that 6 points depends - I personally would move points from nullification, but like you said if one feels like playing more safe they can remove points from offensive passives.

I also feel lv 7 CoF has good enough radius, but it all depends on personal preference

Edit: I forgot to say: very solid build, I will definitely tweak my warlock to try this out.

Damage absorption stacks multiplicatively, not additively. Just one thing to keep in mind if you’re playing a warlock. So I think 15/12 Maiven’s and 12/12 possession calculates to about 34.5% absorption, not the assumed 38%

Exact Snazz, those 6 points in Possession represent 2.3% more absorption, definitely worth it.
Thanks for the feedback snickers, I’ll move 3 points from CoF to Vulnerability and 6 from Nulllification to Possession

For you crucible enthusiasts, my boy @romanN1 tweaked the warlock to optimize the damage for crucible. The result : a good 5:15 run with a fully purple setup.