INTRODUCTION
Hello everyone. Since I have not seen a recent take on ranged pierce Cadence and also because many builders have mentioned that it sucks I decided to make my own. The build is based on @mad_lee’s Valdun Purifier so I stole some things from it, like the devotion map. 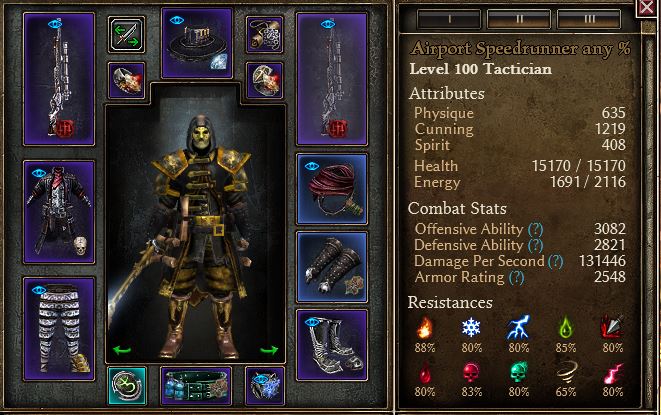 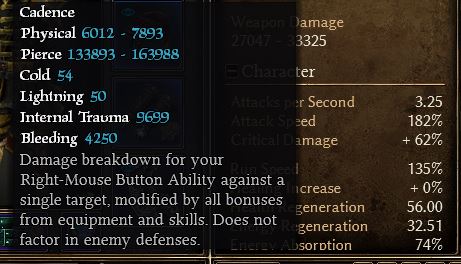 PERFORMANCE
SR perfomance is good, just be aware of Maiden/Fabius/Kaisan they hit hard. I didn’t meet Rashalga or Anasteria but they should be easy with kiting.
Sadly, the build in CR is slow even with more Fighting Form investment, the aoe is still lackluster. Original Grimtools can barely do sub 7 mins. Cadence’s third hit and Fragmenting round have a lot of burst, but they are not enough to carry it in crucible.

VIDEOS
SR 90 Bosses with one death to Valdaran

CONCLUSION
Despite it’s disappointing CR performance it’s one of my favourite non retal-ranged builds.
At least Pierce can dance.

My english nazi senses were tingling but then I saw that the title was a pun. Good job making it work!.

Are you human or are you dancer?

Nice to see you posting the build

edit: also I just saw the name of your char

I would recommend trying out Gutworm’s Mark as a medal. It just gives an insane amount of flat from DM just with one rare prefix/no suffixes.

Really nice build,but I was wondering,is it worth taking Bursting round?isnt it a waste of a proc instead of having a pierce effect proc?

It was mostly used for AoE, you can take chilling rounds or markovian’s advantage instead.

Hi @Retal_Abuser , the build has had some buffs and nerfs since 1.1.9.1, is the performance still more or less the same?

Also, I don’t have any Wendigo eye medals with pierce damage, the best I have is harmonius of readiness or unyielding of the fox, but I’ve been thinking about using black star of deceit, less damage and 1 less point in death sentence, but more lifesteal, more attack speed and more RR from the proc seem quite good. What medal do you think I should use between those three?

Build is more or less the same, you can use Harmonius medal of readiness, should help with resistances.
Banana_peel did a more green heavy approach with much more dmg than mine just fyi

What build do you think is more survivable? I’m not that good of a player so more damage won’t help much if I’m diying all the time though (I mainly play SR if that helps).

Perhaps my version, although the other can kill things way faster than mine.