testing if ceno is a liar

Short and sweet. Mythical Arcanor teased me with elemental forcewave but it didn’t quite cut the mustard. The new necro mods in 1.1.8 however intrigued me. Full elemental skills are rare but I had never tried FOI before, and it’s kinda close to full elemental, so off we go. Satisfied with results, especially when considering it’s elemental damage and no individual RR devos. 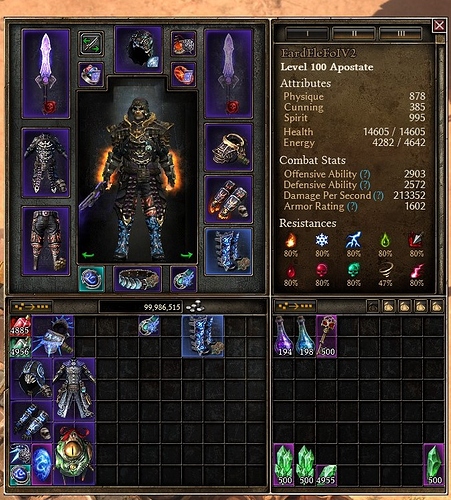 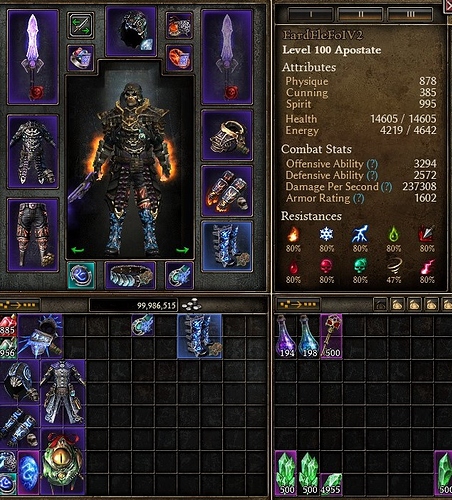 GT stun res is low, we have 4 crafts to use to perk it up. You can also slot a Seal of Resonance in the weapon for more at the cost of AoE and lazy Seru spawning on fully converted corruption. @Crittrain finally wore me down to slow Seal of Corruption instead. Cast speed isn’t capped because we get no class cast speed.

Head, Chest, Necklace, Shoulders: Bonemonger set. Pretty much unavoidable, elemental damage usually suffers from lower RR so we need the extra 30% the set gives us. Stats are decent although lack of cast speed hurts. Probably too much to ask for CS on an already loaded weapon but would be nice to see it for mixed in on Bonemonger for flexibility. I briefly tried a Mageslayer version which pushed around 270k sheet DPS but was considerably slower kill times in practice.

Weapon: Mythical Arcanor. Turns necro into a solid elemental support class when combined with the RR on Bonemonger. Nothing specific for FOI here, but we get to use a 2 hander feeding into FOI’s weapon damage component. Extra 10% ele RR on seal to boot.

Rings: Myth Combustion band seems like a near requirement, giving us relatively hard to find FOI skill points, cast speed, and some fire specific RR. Second ring is flexible, I went craftable Reign of Ice and Fire for stats and a small sustain proc

Belt: Myth Scales of Beronath. Really just looking for +1 Inquisitor here. Aether conversion green is not needed but with good rolls could use as well

Medal: Mark of the Shadow Queen. The other piece of Necro elemental support, and craftable as well.

Gloves: Myth Gauntlets of Ignaffar. Thematically I’d prefer Mageslayer here but Intensify is ridiculously rare as a +skill and these gloves rock it with +4.

Skills and Devotions: Brief rundown here. Tried 3-4 different variations before landing here. Bone Harvest shows a ~20% damage increase in grimtools, but in game only adds around 6% to the dps calculation. The flat isn’t used in another other skills we use, so ultimately it was dropped. Clear times went down drastically by moving those skill points to WoP. Combined with Corruption and devo procs, you never have to worry about focusing FOI on trash. On the devo side, FOI is well known to be a big fat energy piggie and leech alone is not enough. Scales completely removes the problem but damage takes a hit by not being able to combo Attak Seru and Blind Sage. Rolling Bane, mark of illusions in rings, and taking Harvestman’s Scythe gets us comfortable in SR 99% of the time. The occasional nemesis fight will need a potion, but at SR75-76 you shouldn’t run dry. Converted arcane currents + elemental seekers + elemental storm add to the proc damage shitfest that covers up for not focusing on a single damage type. I didn’t get around to trying Will of Rattosh but that would also be comical to use, and Magi could see useful play too.

Gameplay: Zippity Zap trash with WoP, Corruption, and go ham laying seals cause we’re getting 20% RR from them as well. Save elemental devastation, siphon souls, and mark of torment for boss packs. Hold right click otherwise. All combined we have quite a few mob debuffs, we’re sitting in a seal, and we get decent life steal from FOI ADCTH. If you play at a reasonable pace you should absolutely not die in SR75-76.

Crucible: Thanks to @romanN1 for a sassy crucible run

SR75-76: Of the relatively few builds I’ve recorded to SR, this is by far my fastest run. Tag trash with WoP + Corruption and keep moving. Don’t setup shop until you hit a boss pack or nemesis. This is an ideal scenario run that I happened to grab, no negative to build mods and a bit of extra elemental RR. I’ll grab one later with mixed mods for reference.

Look like fun and creative use of that sword

Saw your build when you posted it on discord, nice job

Like it a lot. The SR timing looks pretty nice for elemental Apostate

I’m about to post an aether DW melee Apostate with Bonemonger. Just need to be less lazy to do it

Updated with crucible run from @romanN1. Mid 5s, with some final testing needed around swapping devo procs per @Valinov

Man, these fresh approach builds are always my favorite ones. Never would have considered Necro for Elemental anything! Great to see this is possible! This damn game, just gets better and better when you learn more about building!